Two events occurred between 1672 and 1674 that essentially broke Vermeer and hastened a quick and brutal end to his life at the age of forty three. The first disaster was the invasion of Holland by the French who were attempting to wrestle ports in the Netherlands away from Spain, the Catholic super power holding sway over the Protestant region. The immediate fallout was that the Dutch economy collapsed, leaving Delft in particular with holes in its pockets, prompting a mass exodus of tradesmen for Amsterdam, then the richest city in Europe.

Vermeer stayed put, having several children to feed, and he by default became one of the guild leaders as he was one of the few master grade painters left in town. This didn’t do him much good as the market for paintings vanished. It is at this point in time, if the eponymous claim of this series has any validity, that Vermeer may have, with the facilitation and cash flow of Pieter Van Ruijven, executed outright forgeries.

(St. Praxedis by Felice Ficherelli and Vermeer’s Catholicized copy- the only Vermeer copy to be positively identified- The addition by Vermeer of the crucifix indicates the commission was from a Roman Catholic patron) 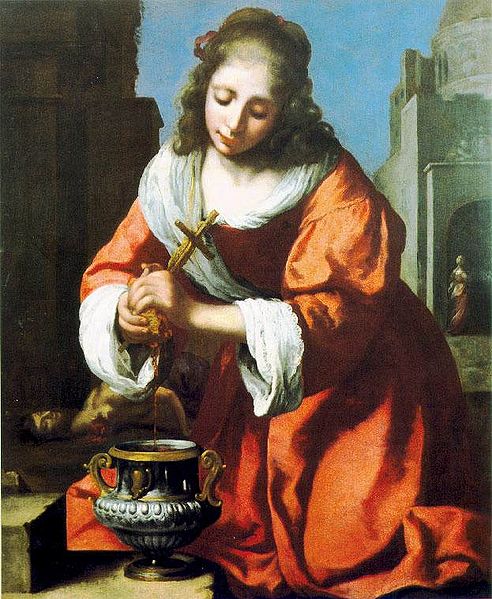 The evolution of forgery in this era begins with coins. The new Dutch economy was a cluster-fuck of unregulated speculation and the bookkeeping was creative, to say the least. Such chaos attracted all kinds of flies from every level of society. As it happened, Vermeer’s grandfather and father were caught counterfeiting coins for a couple of operators working for the Elector of Brandenburg, who had leveraged his ass to buy adjacent lands in Holland to contribute as a bulwark against Spain. The debt ran eventually beyond seven figures, impossible to repay in those days, but along the way, schemes of all stripes were hatched to get cash flowing. Two government wonks, Gerrit De Bury and Hendrick Sticke, lost their heads on the counterfeiting gambit, thanks largely to Vermeer’s grandfather, Balthasar Gerrits, dropping a dime on the two. The Vermeer faction of this conspiracy escaped real trouble; however, name and location changes were to follow. Knowing what was good for him, Vermeer’s father, Rayner Balthens, became Raynier Jansz and made for Delft, even swapping names again, this time to Vos, just for good measure…. Now I’m not going to insist that some sort of determinant gene of criminality passed to Vermeer himself. It’s a mighty convenient story to attach to my speculation, and it is emblematic of the financial times, but I will leave that as an unclaimed turd in the dog park and move on…

The second disaster was the death of Pieter Van Ruijven in 1674, age forty nine. With the French invasion, Vermeer’s mother in law, Maria Thins, had her rental farmland flooded in preparation for the defense of Delft. This cut a huge chunk of change out of the monthly income and in conjunction with the art market collapse, the death of Vermeer’s business partner was the final blow. If Vermeer was in any kind of racket to make unregulated cash, the stress of across the board failure cost him his life-

“as a result and owing to the great burden of his children, having no means of his own, he had lapsed into such decay and decadence, which he had so taken to heart that, as if he had fallen into a frenzy, in a day or day and half had gone from being healthy to being dead.”

Catherina Bolnes, Vermeer’s wife, in a sworn testimony to authorities on the investigation of his death.

Some of his children fared alright- One became a lay nun, living to the age of eighty nine. Two boys became surgeons; another one a notary. Others married and had children. None followed their father into the arts.

By 1678 and the treaty of Nijmegen, the Dutch economy started its recovery. Vermeer’s work remained in the hands largely of the Van Ruijven family and was then sold off at auction in 1696 for very modest prices; from that point until the 1860’s and the creation of the Vermeer cult by Theophile Thoré-Bürger, an art critic and political pundit of sorts, Vermeer’s name, given to him by his father, Raynier Balthens/Jansz./Vos, remained almost completely unspoken. 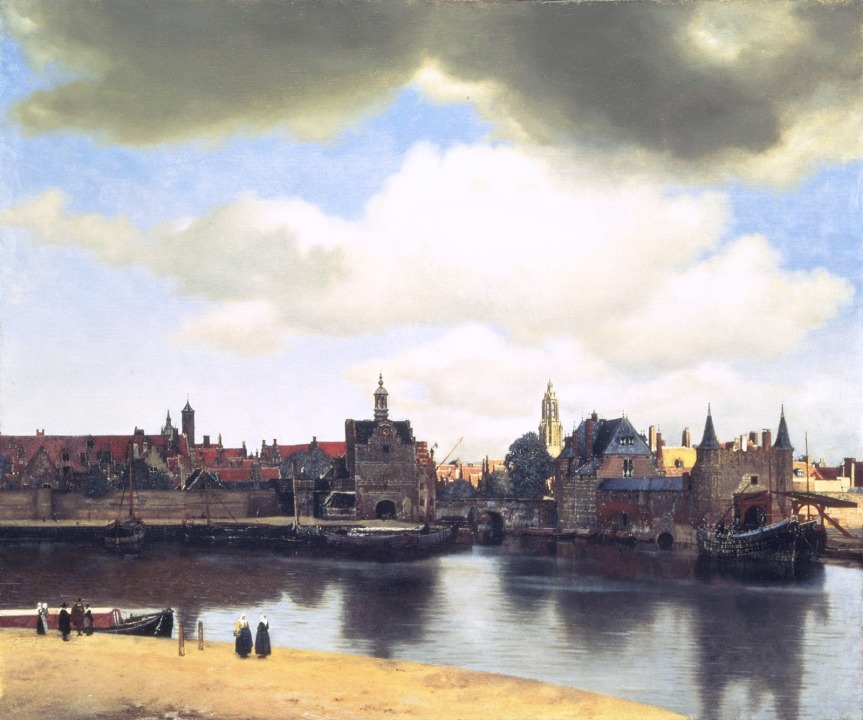 When his reputation was revived nearly two centuries later, the meaning and intent of his work was completely distorted. By the 1920’s, when Marcel Proust had invested The View of Delft with immortal powers, the romance of Vermeer the Martyr had completely consumed the technician and professional copyist and his earthbound problems- and some possibly desperate moves to alleviate those burdens.

One thought on “Vermeer the Forger- Part Five”