The (heavily Photoshopped) images above are making the rounds on Facebook. The election on Tuesday must have some otherworldly esoteric significance to the people with real power, as agitprop is all about us, Pittsburgh and Tallahassee, and supposed rallies as the one above. [Note: To be clear, I suspect there really was a staged rally and that a lot of people attended. I am only saying the photos have been  subjected to a lot of monkey business. Even the sunset is too convenitent.]

But set all of that aside. It is understood (by our readers and writers here anyway) that voting is of no importance, but the idea that voting matters is very important.

As I viewed these images this morning, it suddenly dawned on me that Air Force One, a 747 replete with 1950s technology, is just a prop. The president, though his job is merely ribbon cutting, is transported by other means, probably military, perhaps far more advanced technology than this. They are not so foolish as to move him about in such a garish and outlandish public vehicle, easily spotted and tracked. It’s like a Popemobile.

This is not a new realization, of course. Back when I lived in Billings, Montana, President Clinton visited, and as his motorcade went up North 27th Street towards the airport, Billings’ finest, roly-poly cops barely able to walk upright, ran alongside, their bellies bouncing like jello. I laughed with the realization that Clinton was not in that vehicle. It is distraction, and he either went to the airport in another obscure vehicle, or perhaps in a helicopter. That is how security is done, misdirection … look here, not there. That is why famous people have body doubles.

Anyway, look at the photos and see what jumped out at me. I will insert them again just to keep you from having to scroll up and down the page.

First, I have to wonder, is Air Force One even there? It is meant to be the centerpiece of the photo. In one image it is floodlit, in the other, darkened. Maybe it is just Photoshopped it in. I can’t tell, but the framing, center stage and offset by two buildings, suggests so.  I cannot imagine that they fly it around the country just for photo ops, but maybe they do. I have never seen it take off or land, however. I know when Clinton came to Billings, the only aircraft I remember seeing was a huge transport vehicle, perhaps a Lockheed Galaxy. If Air Force One was there, well, then, it was used as a prop, and Clinton used other means to come and go. That’s my take.

Secondly, look at the lighting, not just of the 747, but also the crowd. See how they are illuminated in front and behind the podium, but shaded for the rest. This could be floodlighting, but the lines are so sharp! Notice how the sign, “Promised Made, Promises Kept, is intended for the photographer and not for the audience around the man holding it. It was either held up on cue, or was also Photoshopped in. I cannot tell. In the lower image the sign is not there, but that doesn’t mean it was not lowered at the time of the photo.

Finally, we have what I think of as the “Let’s get small” phenomenon. That’s a not-very-funny comedy routine done long ago by Steve Martin. It describes the perspective in the photos above wherein people in the foreground look real and present, but as our eyes move into the photo, they grow smaller by too much to be real. In the top photo specifically, notice how there are two kinds of people, big ones in the foreground, and small ones in the backdrop. I would guess that the people in the foreground were photographed at some staging event, and that if we looked at all of the photos around this campaign, they might appear more than once. The far-away crowd could also be pasted in. The lower photo has better perspective, but the lighting is odd and lines are apparent. I am not an expert, but these photos seem hokey. 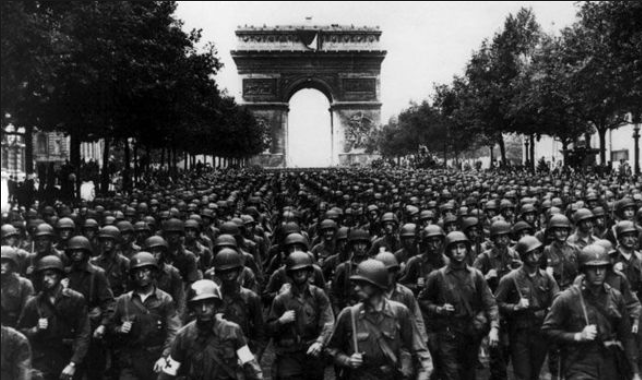 I first noticed this problem that photo fakers have with perspective in the one above, the supposed march of American troops through and around Arc de Triomphe and down Champs-Élysées. Notice the periphery, the people on the sidewalk, neither excited nor numerous, and also notice how small they are in comparison to the troops.

That photo had to be manufactured in a darkroom, and I give credit to the artisans of that time – this is very good work, painstaking and detailed. But it is fake. My conclusion: Americans did not march into Paris. More likely, they trickled in from the surrounding areas, the people of Paris no more aware or concerned about them than the Germans before them.

I was watching Jeopardy one night, as senior citizens do while ingesting our Muslix, when this photo jumped off the screen at me. Same phenomenon, big in the foreground, a banner used to separate and hide the pasting, and small behind with no in-between, no perspective. My conclusion: The famous march in Selma consisted of maybe sixteen people, those visible in the foreground. Everyone behind was pasted in. The Selma march was a news media event, fake.

These days, with Photoshop and tools far more elaborate than available to the general  public, photo fakery is so easy that any clown can do it. There is so much of it! Look closely at every news photo you see.

8 thoughts on “The illusory Air Force One”