Environmental groups (real ones, anyway) are often criticized for excessively engaging in lawsuits. The logging industry has engaged the PR industry to defend them, generating talking points such as calling the lawsuits “frivolous” and even painting environmental groups as racketeers. Behind the scenes they no doubt talk a different line … lawsuits force industry to follow the law, and are a damned nuisance.

I worked for many years in the environmental movement in Montana. The group I worked with, Montana Wilderness Association, is now a full-fledged industry front group. They might have been so in the 1990s too, when I was with them, but they had very little money. That is usually a sign of a genuine environmental group. These days their money rolls in from trusts and foundations and they are bloated with excessive staff while “collaborating” with industry. They are phonies. 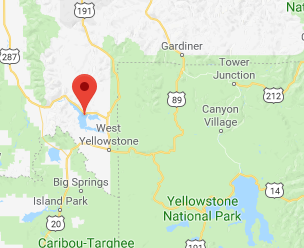 What triggered this was a lawsuit against the US Forest Service to stop a large logging project north of Hebgen Lake on the border of Yellowstone National Park.(The red arrow points at Hebgen, and the logging project would be north and east of it.)

Read about it here, and be patient – the newspaper in question will gray out the article and ask some intrusive questions, but allows “I prefer not to answer” so that if you give that answer enough times they back off and let you read the article.

The problem activists face is what to do when government agencies are involved in law breaking activity. Who do you report it to? Congress is bought. News outlets get a quote from both sides and move on. There is really only one resort – sue the bastards.

Environmental groups have limited resources and cannot afford to be lawsuit-happy. They have to make the most of their resources, and so are careful in selecting targets for suits. For that reason, they usually win. That too is a behind-the-scenes reason why industry hire PR agencies to discredit anyone suing the government for bad behavior. Industry generally loses these lawsuits.

They also attempt, when they write laws, to make lawsuits illegal, usually by feigning some kind of emergency, as in Salvage Logging riders or claims to be acting to save “forest health,” a PR-generated buzzword. It’s all a ruse. The logging industry cares about the health of our forests as much as Hannibal Lecter for his victims. They need to eat, you see.

13 thoughts on “Another “frivolous” lawsuit”