As we settled in here for a long winter, with heavy snow in late October followed by a couple of lesser storms, I realized we had many long nights ahead of us here in the Colorado Rockies. I decided to subscribe to HBO. In so doing, Game of Thrones became available to us. I was one of those who had never watched an episode in all of its eight-year run, but I did recall seeing some naked blond woman (Daenerys Targaryen  played by Emelia Clarke) standing in front of a burning building one time. We must have been in a motel.

So, we settled in this winter to watch one episode per night.

We lasted eight episodes, but in episode nine a beloved character, Ned Stark, was beheaded as his two young daughters looked on. Enough, I thought. If this is what GoT is about, unbridled cruelty, I’ve got better things to do. My wife, who is a soft and kind woman, suggested we keep watching, and I went along. We are now in season seven, and spoilers are all around, so I have a good sense of what is coming in the future. But I also have a good sense of why the series was such a gigantic smash hit all over the world. As I was reminded in a dinner table discussion, there are 73 episodes, each with high production values, costing roughly six million per episode in the beginning, and $15 million for season eight. But there is far more to it than just big budgets.

Graphic violence: I have never watched anything on TV or in cinema that allowed such unhinged bloodshed and bodily mutilation put forth so boldly on screen. True, enough of it is by sound effects and power of suggestion, but GoT does not shy away from rolling heads and spilled entrails, arms and legs severed and swords plunging through chests, stomachs, hearts and heads. People are incinerated. In one particularly gruesome episode, it was not violence, per se, but the idea that people were locked in a huge cell without windows, and were left there to slowly perish in the dark. One man was killed by simply having him run naked behind a horse traveling at normal speed, until he dies. Beheading is considered a kind death. Down on the scale, but repulsive nonetheless, in the last two episodes we have seen a character called Sam going about his job of cleaning chamber pots and latrines … they just can’t help themselves – we have to see the excrement! There must be some base appeal in this sort of screen presentation – so long as we know on some level that the violence is not real.

Viewers know that GoT will not shy away from any form of violence, no matter how repulsive. It is part of the appeal.

Nudity: Emelia Clark (The Dragon Queen Daenerys Targaryen) said in an interview that she was young and this was her first big role, and she had no idea of not just of the nudity itself, but the length of time she would be naked before the camera. She said she was not prepared for the amount of nudity that was required of her, a “f***load.”  I don’t think viewers generally realize how difficult it is for a man or woman to stand naked before a cast and crew and stay in character, as we all tend towards modesty. Cersei Lannister (Leana Headley) is required to walk naked for what must be a six minute scene as crowds of people hurl excrement at her.

Surely the producers of GoT know that nudity is a big draw. The characters, the women said to have lived in medieval times, have amazing bodies and readily shed their clothing. I think there was a Seinfeld episode that discussed the concept of “good naked” versus bad naked, wherein Jerry was seen on hands and knees using a machine to buff his floor (bad naked). GoT is good naked. I suspect, without the nudity, its audience would shrink.

Compelling characters: The people portrayed in GoT are mostly, each in their own way, depraved. They are intense and damaged, seething in anger and seeking revenge, and there is plenty in the script for which revenge is necessary. There is a tendency to let evil characters live on for a good long time, and to kill off good ones (as with Ned Stark) before their time. The acting is superb, the casting excellent. The dwarf, Tyrion Lannister (played by Peter Dinklage, who gets top billing in each episode in the beginning credits) is a deeply flawed man and excellent actor, and we are forced to take him seriously. He has lasted now over six seasons, and I am hoping he makes it to the end. But remember, it is GoT. Don’t fall in love with a character. As soon as you do, they kill him off.

Good writing (through season five): As relayed to me in dinner conversations, the first five seasons were based on George R.R. Martin’s books, of A Song of Ice and Fire. The creators of the TV series, David Benioff and D.B. Weiss, were hoping he would continue with those books as they moved into seasons six through eight. But they had to go forward with mere plot outlines as a basis for scripts, as Martin was doing other writing.  Consequently, in my view, the plots have suffered, become more contrived, more outlandish, if one can say that about fantasy. Just last night, seasons seven episode 2, we see Ayra Stark takes on the body, hands dress and mannerisms of Walder Frey, an old and gruff man whose throat she had slashed in an earlier episode. She then poisons all of the remaining lords of the House of Frey by having them drink a celebratory toast of wine.  Removing the facial mask she reveals herself as a young girl again. I realize it is fantastic and fictional, but as I said when I watched Superman make the earth rotate backwards in the 1978 movie, that’s a bit hard to believe.

Benioff and Weiss offer series insight at the end of each episode, and after season six, episode one, remark that usually flashbacks are a sign of lazy film making. They then go on to explain why, in making the first episode of GoT without benefit of a Martin book, they felt using flashbacks was a really good idea. I have noticed a kind of clunkiness in the scripts since the end of Season five, where John Snow is stabbed to death by mutineers. Euron, who only a few episodes before had lost his sailing fleet, encouraged his men (there must have been fifty) to start cutting down trees to build a new fleet. In season seven, it is up and running even as we see no sign of a shipbuilding yard on any set at any time. It is magic, I suppose, and there is a lot of magic in Song of Ice and Fire. But it taxes willing suspension of disbelief to an extreme. I want to believe in the characters and plot, but season six forward it is getting more difficult. 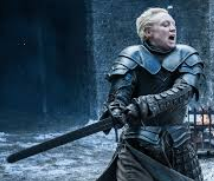 Also, and Bennioff and Weiss claim this is merely happenstance, we now have a host of characters who are seasoned battle veterans, powerful sword fighters, a teen-aged murderer, and all are women. This too strains credulity. At least Gwendolyn Christie, who plays Brienne of Tarth, a butch knight who looks and fights like a man, fits the part. The rest appear to be there in some curtsy to our modern era where gender is accidental and even a choice. True enough, women like Cersei Lannister make very good villains, but putting them in a sword fight as equals with men is absurd.

We have the better part of two seasons to go, and there are plenty of spoilers all over the place, so I have a hunch what to expect, even a cup of Starbucks, said to be accidentally left on a table in a set. I assume it has been digitally removed. I decided to write a bit about this remarkable series yesterday after encountering someone somewhere who thought the series might be based on real historical characters.  Yes indeed, that is the case, and also, Daenerys Targaryen’s dragons are based on real living creatures of ancient times too. It is historical fiction.