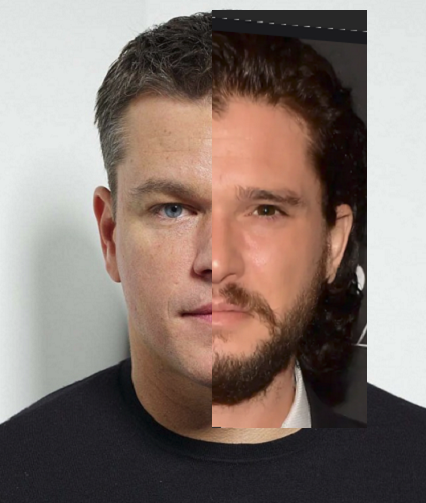 Take a moment to analyze the two faces above. The left is a young Matt Damon. 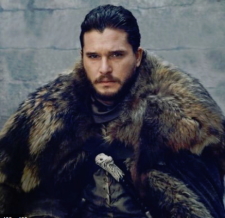 I had a funny feeling watching Game of Thrones that we had another Matt Damon Batch member here, the widow’s peak being the tip. So I found a full frontal of Kit Harington’s face, straightened it so the eyes were level, and then set the pupil distance at one inch. I then did a split and overlaid it on to Matt Damon’s.

The results are very close. Harington has lower eyelashes, and the ears are at a different place on the skull (possibly angular distortion), but the nose, lips, chin, head shape and widow’s peak all scream Damon.

Spoiler alert: If you think you might watch Game of Thrones, where Harington plays the bastard Jon Snow, read no further. I mentioned in a previous post that I thought the quality of the writing in GoT suffered after season five, and Jon Snow is part of that. It is not that he was brought back from the dead, but rather that I saw it coming. I am only now in season seven and can tell you that the dragons are going to incinerate the White Walkers, as someone already said they can be killed with fire.

If I can see these things coming, the writing is rather transparent.

The work is objective. I will state the shortcomings below. But when I present comparisons as this one, I have not in any way monkeyed with the images to make them appear more suitable to my conclusions. What happens on screen here happens before my own eyes as well. If I do not have anything interesting to reveal, you do not see it. That is most often the case.

Many people, including Miles Mathis, presume that the naked eye is the best judge of resemblance. He credits himself with exceptional naked eye skill due to his work as an artist. It is not good work, not credible, because it is not rigorous. Naked eye appraisals allow the interference of bias and preconceptions. My work eliminates much of this. My own shortcomings are discussed below.

Familial resemblance is not normally so exact that facial plates are alike. Look at your closest relatives.  There is resemblance, objective observers will see it, but it is not the precise lineup of features we see here. I have done a few thousand of these comparisons, and only once, with a father and daughter, did I find a matchup like this. Thus, with Harington and Damon above, as with Damon and a host of others going all the way back to James Dean in the 1950s, Paul Newman in the 1960s, Jack Nicholson in the 70s, Ben and Casey Affleck in the 90s, and maybe twenty others, including women, I suspect something is up. There is some genetic process by which our stars are made before being born. It is not a mere matter of being related. I have maybe 40 first cousins. I do not look like any one of them. Not even close.

Shortcomings of the method: I am not the same room with these people. I don’t imagine that their pupil distances are alike. The precise resemblances only turn up by this method. It could be that Matt Damon has a larger skull than Kit Harington. That does not negate the work because the similarities in feature are still too precise to be explained as happenstance. I am human and have made mistakes, but these were mostly with exuberance in discovery of twins that was really just angular distortion. Mistakes are the best teacher. If you look back through posts here from days gone by, you will find that the only “twins” left are those for whom the evidence is very strong – Paul and Mike McCartney, Janis Joplin, Rihanna and Drake, and a few others where I can tell with naked eyes which is which, or we have photos of the two together. I also drifted off into making comparisons using other criteria to allow me to use side angles. It was fraught with difficulty and yielded bad results. The only other method I find rigorous enough is examination of ears, as no two are alike. Thus did I find with Freddy Mercury and Dr. Phil a match, this in addition to facial plates. Few accept it because it offends common sensibility … how could that be!?!?!? I learned that amazing things happen right before our eyes on this whackadoo planet.

So when you see such resemblance as I have pointed out here, if your first presumption is that I am dotty and your eyes tell all, please don’t assume that in this matter you are the smart one and that I am the dumb ass. You might have it backwards. Some other game is afoot here. Join me in trying to understand what it is rather than merely trusting your own instincts. It is time you questioned those instincts.