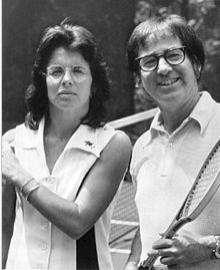 I spent part of my day yesterday listening to Marc Maron interview Billie Jean King. It’s a good interview, Maron doing great work these days on his podcast. He keeps it going and does his homework.

Because this event, The Battle of the Sexes, happened 48 years ago, I don’t imagine many readers are familiar with King, so a little background. I will quote directly from Wikipedia, as I do not imagine they have any reason to lie about her accomplishments.

King’s Open in 1972 made her only the fifth woman in tennis history to win the singles titles at all four Grand Slam events, a “career Grand Slam”.[a] She also won a career Grand Slam in mixed doubles. In women’s doubles, only the Australian Open eluded her.

King won a record 20 career titles at Wimbledon – six in singles, 10 in women’s doubles, and four in mixed doubles.[b]

That is impressive. King was a superb athlete, the best female tennis player of her era. She is now 78 years old, and judging by the Maron interview, sharp as a tack. I take nothing away from her talents nor do I question her integrity. She was integral in bringing women’s tennis to the public mind and allowing women to make as much money as men in the sport.

Bobby Riggs (1918-1995) was also an accomplished athlete, with many titles to his name. However, he was well past his prime when in 1973 he challenged King to a tennis match. I have not thought about this event in many a year, but here is a sampling of what King had to deal with in that era, since she was gay … a joke that made the rounds: The lead advertiser for the event, called The Battle of the Sexes, was Snap On Tools. That’s crude, I know, and being gay in 1973 was no treat. King had a lot to overcome.

World wide, 90 million people watched the event live on ABC TV, including 50 million Americans. In those days we had three choices for TV, CBS, NBC and ABC, Assembling massive audiences was not unusual. (The 2021 Superbowl drew 91.6 million viewers.)

But then I thought … “Riggs”? Really? Bobby Riggs? Are they taunting us? As the match went, he played very poorly. King fell behind in the first set, and then went on to win 6-4 6-3 6-3. There was noise at the time that he had thrown the match, and decades later it would be revealed (and denied) that Riggs was deeply in gambling debt, and needed money to pay off Mafioso. Wikipedia admits that he gambled on the event.

So there’s that. My first thought was that King, who was paid the equivalent of $583,000 (winner take all) in today’s money, was being promoted by Intel, with or without her knowledge, as I have long suspected that Intel was behind the feminist movement. I say that with the understanding that the movement’s success has made life far more bearable for women who want choices and careers, and that this is a good thing to have happened. Still, the push behind it was not, in my view, organic. It needed help from high up. (I say the same thing about the Civil Rights Movement, and with the same attitude: Blacks needed a hand up. It was a good thing.)

Some have said that more than a Battle of the Sexes, Riggs vs King was a battle of age versus youth, King 26 and Riggs 55, 29 years older. That is true, it was in that regard a mismatch. King herself said in the Maron interview that the best man will always win over the best woman in any sport, and it was never her objective to change that fact of life. (These days, with men claiming to be women in so many sports, that’s not such a sure thing. In King’s day there was a male tennis player who had a sex change operation, Renée Richards – King said of him/her that she was at first shunned by the tennis community, but won acceptance.)

I presumed too much about King and this event before sitting down here. King really was a ground breaker, and I admire her and hope the Battle of the Sexes, on her end, was legitimate.

By the way, she was born Billie Jean Moffitt, but at age 19 married Larry King, not that one, but a tennis player by that name. She kept the name King, and said in the interview said that she did not realize she was a lesbian until her mid-twenties. Given the era, I find that credible.

Her brother, Randy Moffitt, was a Major League Baseball player for various teams, 1972-1983, ending up with a 3.65 ERA. That’s impressive. The Moffitt family, mother, father, son and daughter, were all accomplished athletes.