So last night somebody posted this famous pic to Reddit’s conspiracy subreddit with the catchy title “One of the most disgusting photos of all time:” 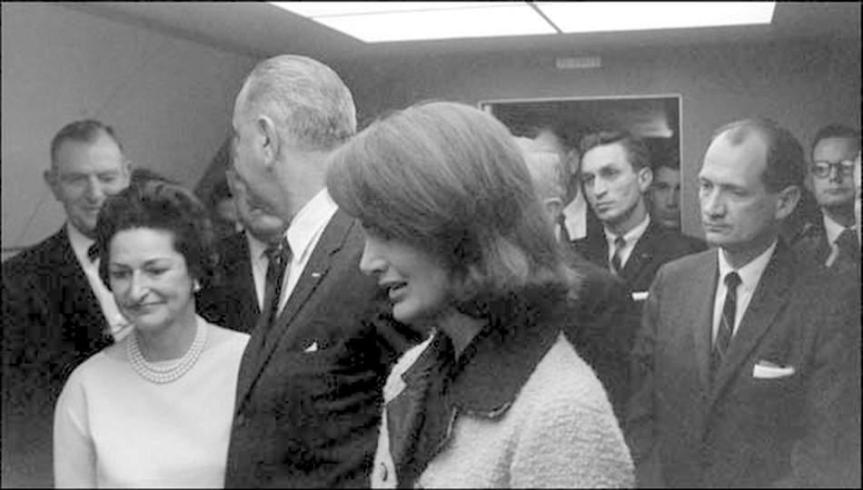 Here was his comment to go along with the picture:

“This photograph was taken on Air Force One. Immediately after being sworn in as the 36th president in a coup, LBJ, standing next to Jackie Kennedy (with her husband’s blood still on her dress), turns to his long-time friend, Texas congressman Albert Thomas and smiles, as Thomas returns a wink. And a smirk.

The White House photographer who took this photo, Cecil Stoughton, has stated he feels as if this photograph is ‘sinister.'”

Well, if by “sinister” he meant “fake,” then I agree. This is one of the most fake photos, or as I like to say, fauxtos, of all time. And here’s why.

Now before we take a closer look at that photo, I want to look at some other pictures that come from LBJ’s swearing-in just moments before. I got all of these off the official John F. Kennedy Presidential Library website. 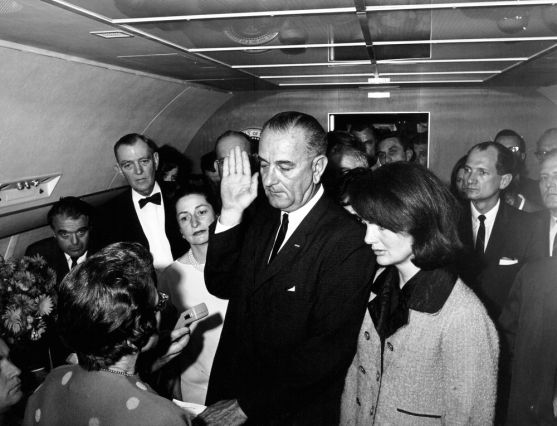 So one thing to notice here is that LBJ and Jackie’s faces look identical both pics. Same for Ladybird Johnson, Congressman Al Thomas and the guy crouching down next to him. In fact at first glance pic 2 looks like an identical but cropped version of pic 1. But if you look very carefully you can see some interesting discrepancies:

I suppose you could argue that the two pics were taken moments apart with the cameraman slightly changing his position between the two. Bu if this was due to the cameraman moving, then we would expect a slight change in the angles of LBJ and Jackie (and Thomas and Ladybird), but to my eye those are exactly the same pictures of them from exactly the same angles — the angle of the cameraman seems not to have changed AT ALL. (I believe if Mark did a photoshop overlay of their faces, he would indeed find they match up at the same exact angle.) Also, notice the shadow cast from the judge signing in LBJ onto Ladybird Johnson’s dress. It’s exactly the same in both pics, which would not be the case if the cameraman moved. Thus, while the background images may be explained due to camera movement, they are out of step with the figures in the foreground. Clear signs of a paste-up or photomontage.

Here is more evidence that these pictures have been doctored:

Woah! Did somebody suddenly turn the lights on? You might say that, yes, in the moments when LBJ is being sworn in (the audio recording of it lasts about 30 seconds), somebody decided to turn on the lights. But if you look at the full series of pictures on the JFK library website, there appears to be no continuity with the lights. In some pics they appear to be turned on before the swearing in. For example this one: 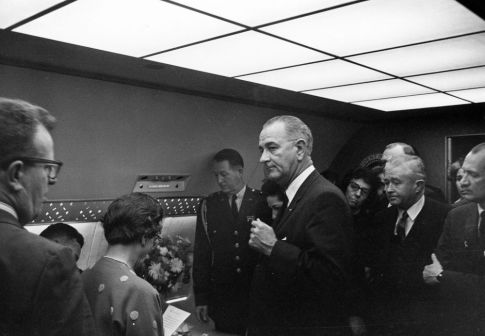 This one is described as “Officials gather inside Air Force One for the swearing-in of President Lyndon B. Johnson.” And you can see here that the judge appears to be studying the oath, preparing for the signing in. We also don’t see Jackie  or Al Thomas in this picture, and the general standing between LBJ and the judge (where Al Thomas will be) is nowhere to be seen in later pics. So we have many indications that this was taken before the swearing-in, and the lights are all on. So what, was JFK Jr. in the back playing around with the light switch?

OK, one more bad fauxtomontage before we get back to the picture that started us off:

Come on! Look at that thick white line on the top left of his head. That’s clear, unambiguous indication this is a cut-out. And that’s an official picture in the JFK library! But also look at the line separating him and Ladybird. Where is his arm? Is he holding it behind his back. Why is the picture of Ladybird sharp and in focus whereas LBJ is grainy and out of focus?  Look how big his head looks relative to his body. And that’s just the tip of the iceberg. The sizes, lighting, and focus in this picture are all out of whack. 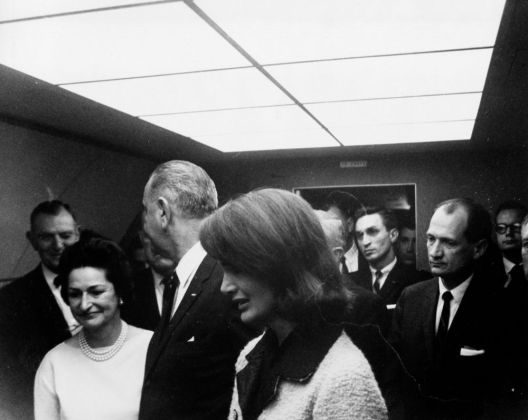 First off, what is that weird bright spot above Al Thomas’s his head and the stringy line next to Jackie? Suggestive of fudgery, but not definitive evidence. There are really two big giveaways in this picture: the lighting and the focus. Notice that LBJ, Ladybird and Thomas all have shadows down the left side of their faces. But notice that Jackie does not. Her nose and chin are brightly lit. I suppose you could say that’s because she’s standing directly under the light whereas they are off to the side. And that might explain it. Except then look at the previous picture with LBJ’s obviously pasted-in head. There LBJ and Ladybird are leaning in directly under the light, and they are casting more-or-less sensible shadows across the left sides of their faces. But even though her head is tilted down and her big hair should be casting some kind of shadow across the front of her face, it’s not. In fact, the more I look at those two pictures, the more it seems like it’s the exact same picture of Jackie, although the angle of her head is a bit different in each of them. (Mark, how about an overlay after correcting for the angle?)

Also, Al Thomas is grainy and out-of-focus. But look at the guy standing behind LBJ, in front of the door. Sharp and in focus, right? Al might be winking there, or it might just have been drawn in that way. Compare this version of the picture to the one at the top, which has been obviously retouched, brightened, and the artifacts removed. In that picture, the closed eye is much clearer. And yet it doesn’t look like a wink to me. When you wink, you usually have to kind of strain your eye. But here it just looks like a blink. So they might have pasted in a  picture of him with his eye closed here. Or it could have been painted over. It was faked to tie into the conspiracy theory that LBJ and Thomas were co-conspirators. That was one of the narratives they were pushing, or would later push. And this fauxto was then used as supporting evidence.

The fact that these photos were faked offers even more evidence that the JFK assassination was a hoax. I won’t get into the evidence for that here, but you can read more about that here, here, and here. So if they fake-killed JFK, then they had to have a fake swearing-in ceremony for LBJ as the new President. Or even if the swearing-in was real, they needed to produce some photos of the event that would feed into the narratives they were pushing (the president really died) or would later push (LBJ and Thomas were co-conspirators).

23 thoughts on “One of the Most Fake Photos of All Time: The LBJ Swearing-In Ceremony”