“There are not enough morally brave men in stock. We are out of moral-courage material.” (Mark Twain, United States of Lyncherdom)

I just got done listening to Mark Steyn speaking before the Heartland Institute. He’s a smart, charming and entertaining speaker. Also, he is a courageous man. Michael Mann has sued him for saying that the Hockey Stick is science fraud. It is a SLAP suit more than real, trying to get Steyn to stfu, but Mann has grabbed a wolf by the ears. This is a free speech case, and not about science. Typical of the climate hoax crowd, Mann wants to be immune from criticism. Steyn has counter-sued using anti-SLAP laws.

I decided last evening that I would write only one more climate piece, and then move along. I am still going to continue reading and exploring the subject, as it has been a fascinating journey. I did not know that the Roman Empire arose during a period of time when the planet was much warmer than now, or to couple the Italian Renaissance with the Medieval Warm Period.  I did not know that the Little Ice Age ended in such recent history, the mid-to-late nineteenth century. This is fun stuff.

I am going to stop writing about it however, because I am sick and tired of lying liars, and this blog is not a science blog.

Not all climate scientists are liars, of course. But it is interesting that only one man, Steve McIntyre, a Canadian mining statistician, asked Mann for his data. You would think that climate scientists would be all over it, but none were. His work was done in an apparent vacuum.

“A controversial and widely cited paper on the subject [of ocean acidification] is Feeley (2006) showing a graph linking decreasing pH to increasing CO2. …

… An enterprising young PhD candidate at the University of New Mexico by the name of Mike Wallace looked closely into the work of Feeley and his co-authors, finding that the supposedly “historic” data was nothing of the sort. Wallace observed that Feeley had only used real-world measured data from 1990-2015. He had ignored the real-world measurements dating back at least a century.

Feeley’s graph was generated using climate modeling for the pre-1990 portion of the curve, rather than actual measurements. When Wallace graphed the actual data, the “acidifying” trend produced by the model disappeared.

Wallace questioned Feeley’s co-author, Sabine, about why real-world measurements had been ignored. He was told that, if he continued this line of questioning, “You will not last long in your career.”

I am no expert, no scientist. I can’t speak to any of that. I don’t know what the green line on that graph, “Aloha seawater pCO2 insitu (uatm)” means. I am just tired of the attitude, the manner in which skeptics are treated, the loose science and careerism that has trumped real science. I know how Diogenes felt.

Below is a depiction of climate scientists, as I see them.

The force that keeps climate scientists inside the fences is money. These are probably honest men and women, but the need to earn money and have a career has a way of pointing the mind in a certain direction. There’s no National Science Foundation grants available for skeptics. If a scientist comes upon data that upsets the climate change narrative, it can be easily ignored. That’s all that Mann did with the Hockey Stick – he cherry picked, massaged, and transformed the data to suit his needs. (He eliminated the Medieval Warm Period and Little Ice Age in the process, and claims to this day that these things never happened.)

That is but one part of my disgust. Another part is just a nagging suspicion about which I sincerely hope to be discovered wrong.

First, an anecdote. I once active in the Montana Wilderness Association, now easily seen to be in industry front group. I did not see that then. One of the leaders was a man named John Gatchell, and the story on him was that he was once part of the timber industry, but became disgusted and bolted, joining the conservation movement. He might still be with the group, as he was the last time I checked, but that was a long time ago.

Recently I watched a video in which Judith Curry and Patrick Moore debated Michael Mann on climate science. This happened in June of 2018.

Wait a minute! If Mann is what I think he is, serving a different and unseen master and agenda, then he is not going to engage in free and open debate. But he will appear opposite controlled opposition. Curry supposedly served on and then left the Intergovernmental Panel on Climate Change (IPCC), and Patrick Moore was the former president of Greenpeace in Canada.

What do Gatchell, Curry and Moore have in common? They all jumped ship. Maybe that is all real, but it could be a ‘tell’ of sorts, jumping from one side to another. I am wary of controlled opposition. It is all around us. Let’s hope that is not what we are looking at. Curry especially appears to be doing good work.

Finally, we all know (at least at this blog) that YouTube is heavily censored, as is Wikipedia. I find it strange that climate skeptics are featured prominently in both mediums. This makes me a little skeptical about Climategate too. Is the whole of the skeptic movement to clear up the science of climatology a mere distraction? Was Climategate bait? Is the whole climate debate meant to be a “look here, not there” sideshow?

There is nothing scientific about the IPCC.  There’s an agenda there, maybe best expressed as keeping undeveloped areas of the world undeveloped. CO2 contributes a small percentage of the warming that is going on, and plays a large role in the greening of our planet, improving crop yields, helping to diminish wildfires and droughts. It is providing food abundance, which means more people living longer and healthier lives.

One final thought. In another post I showed a graph of the last 10,000 years based on Greenland ice cores, which I regard as reliable science. 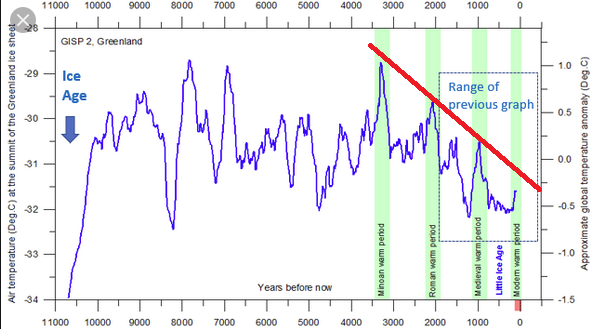 I added that red line. Remember, I am an accountant, not a scientist, and that this graph represents only 11,000 years, hardly a blip in the planet’s history. I also know that interglacial periods typically last 10-15,000 years. That is what we are in, and that is what the graph depicts, the current interglacial period. We are 11,000 years into it. That red line is hitting on the high points of the warm periods of our relatively recent past. It appears to me that we have reached a warm peak 3,500 years ago, and are now cooling. If past is future, another ice age is inevitable. Maybe we need to keep pumping CO2 into the atmosphere to stave off a big freeze.

That’s it. I’m done now. No more writing about climate, Climategate, or the lies and the lying liars who tell them.