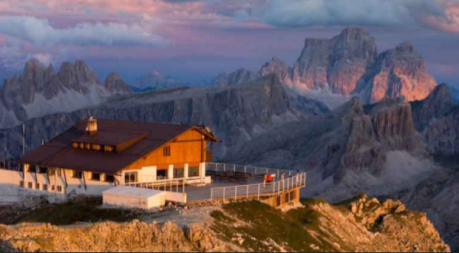 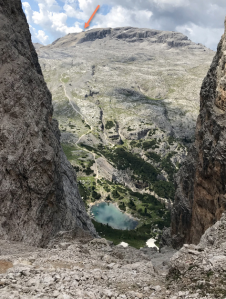 “I piss on you all, from a considerable height.” (Louis-Ferdinand Celine)

The photo to the left is of one of the hardest walks we ever did, somewhere in Italy. It is not that it is a great distance or steep climb – most of us could accomplish this and recover quickly. The problem was this: I placed an orange arrow at the very top of the mountain we had to ascend.  Though hard to see, it is Rifugio Lagazuoi, seen above. It is a mountain hotel, where we would be staying in that night. We could see it, and over the entire walk that followed, it never left our sight. It also never seemed to get bigger. This is what made the hike so difficult, a psychological sense that we were not making any progress.

As the photo to the right indicates, we did eventually make it to our destination.

I wish at the outset here to separate myself from men and women who climb mountains. Maybe in another life I will deal with ropes and gadgets designed to suspend people at high altitude, as from the Half Dome or North Face. I have climbed, that is, jumped from rock to rock on minor hills and mountains, pulling myself up, losing fingernails, and I must say it was invigorating. Now, at age 71, I stay on trails. I have never used a rope, helmet, harness in any “mountain climbing” sense, and a carabiner only to suspend a water bottle from my belt or bird feeder from a wire on our property. You magnificent people who do that, go away. This is not written for you, who might echo Monseur Celine above about our efforts.

This essay is about climbing, but only in the “unrelenting uphill” sense. Yesterday my wife and I set out to do a very manageable feat, climb Mt. Bierstadt, one of Colorado’s more achievable “fourteeners.” We didn’t even set out to climb it, and skipped the last 200 feet, so our our vertical rise is a lousy 2,191 feet as opposed to summiting after climbing over rocks and boulders for the last 200 feet. She wanted to see how difficult the stream crossing was … the hike starts out with a mild one-mile descent to a creek, and then the climbing begins. We got there, and more out of denial of aging and without words, kept going until we reached the saddle, the place where we look down on the other side. From there, people tackle the final 200 feet. Today, the spirit did not move us so.

We do not “climb” mountains. We walk uphill for prolonged periods, but on trails provided by generations before us. We are not of the class that uses helmets and harnesses. I wish for no pretension. The walking is hard for beginners, ascents that are “f****** unrelenting”, as I told a daughter in a cell phone call from a trip up Mt. Baldy in the Bridger Range of Montana. (It is not unusual at high elevations to have cell reception.) In those days our vertical ascents were often in the 3-4,000 range.  Mt. Blackmore, in the Gallatins, was 3,500. Baldy, Saddle Peaks, in the Bridgers, were 3,500 plus. Today we look on Bierstdadt, at 2,100 plus as a challenge. Elephant Head in the Absorokas was 3,500 feet, the last 1,500 on talus slope, often on all fours. That was tough.

My first experience at climbing was in my early thirties, Granite Peak, the highest mountain in Montana. Seen to the left and from the north, its beauty is stunning. Most people approach it from the south, arriving at a high point and crossing the jagged ridge to the left. For reasons that I do not recall, the four in our party that day opted to approach from the north, by means of Mystic, Crystal and Avalanche Lakes, the latter two seen in the photo.  While it seems an easier hike, that route required crossing a large boulder field,  not an easy task, and costing me a fingernail (I placed my hand in a crack in a boulder, and as I pulled myself up, my weight caused the crack to close on my fingers.) 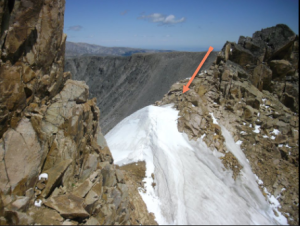 At that time Granite Peak had a snow bridge that had to be crossed before the final ascent, seen to the right. The orange arrow indicates the point at which I stopped and waited for Steve (not our writer here), who crossed the bridge and attempted to climb the peak. He only made it fifty feet or so, as the final ascent up Granite is a technical challenge, requiring ropes and hooks, helmets and more courage than I possessed.

The trip back to our base camp was in part a treat. We glissaded down a glacier, sliding on our rain jackets. It was a scary proposition for me until I learned that I had excellent control using my feet. You can see that glacier right under the “U” in the two peaks in the photo left and above. In those days I carried a small metal cup that hooked to my belt, as as we traveled that day I was able to sip the ice cold water of runoff … delightful. That night, back at our base camp (after again crossing the boulder field), we were greeted by a mountain storm, perhaps two inches of hail piled around our tent. It was on this trip that I learned the meaning of tired, and of exertion. Those who climb mountains for real know of this, and I experienced for the first time on this trip, physically challenged to the point where I wanted to quit, having no option but to keep going. I was exhausted, but to quit was impossible. This is the essence of what mountain climbers do. In my next life, I am going to climb mountains, not duck around at their base. I have not done enough of what really matters. I know this.

It was trips like that that gave me the bug. I wanted to be in the mountains, maybe not scaling the high peaks, but at the very least, going on long treks and testing my endurance. 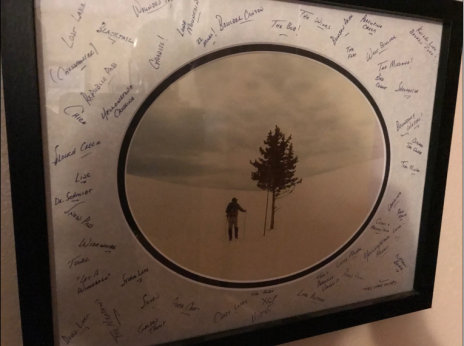 On my office wall I keep a photo of Steve, which I framed while I was still grieving his death. It was a photo I took of him in Yellowstone, on the Blacktail Deer trail in the northern section of the park. Amateur photographer that I was, I took the shot because I thought it appropriate that Steve be seen next to a lone tree, somehow symbolic of his status in life. He was not a loner, but was a man who did many things in solitude because no one cared to join him … except me when I could. He would often go on long backpacks by himself, the group of friends he and I knew more inclined to boats and beer. Around the photo I wrote down every trip he and I did together. Steve died by his own hand in 1998. I was devastated.

My hiking partner is now my wife, and we have many trips ahead – if I ultimately take the vaccine. I see little alternative if we are to continue to be hiking buddies. Of course we are slowing down in our seventies – I was surprised to find that our hikes in Montana were far more difficult than those in Colorado, given its famous “fourteeners”. Granite Peak above, the highest in Montana, is 12,799. It is a grueling ascent from all directions. Mt. Elbert in Colorado, the state’s highest at 14,440 feet, is a much easier climb, a “walk-up,” as we say. The vertical ascent is 4,390 feet, and there are two false summits before arriving at the top. It’s a long day, but not technical in any way. The times we have climbed it (twice) have seen many people on the trail, most annoying those damned young kids passing us and wearing sneakers.

If by chance you are in Montana, I suggest a hike to Pine Creek Lake, not a mountain, but a five-mile 3,500-foot climb along a creek to a beautiful waterfall and lake. It was an annual event in our group of friends in Bozeman. It is accessed via Highway 89 through Paradise Valley and Livingston.

If you are in Colorado and are interested in climbing a “fourteener,” Bierstadt is accessed via Guanella Pass off Highway 285. The photo to the right was taken yesterday from the parking lot. You walk through a long and somewhat flat trail through willows, and no surprise, it is not unusual to see goats and moose. Although it appears a mild hike, and by fourteener standards it is, be prepared for a very steep ascent as you climb the mountain just under the orange arrow. Because it is several miles distant, the photo does not show the difficulty. And, as always in Colorado, start out early to avoid afternoon showers, perhaps lightning as well.

Our first trip up Bierstadt was in 2011, on a weekend. On arriving at the summit, I counted 130 other people there, with us having the honor of being the oldest. There was a pug running around up there, though I assume he made the trip in someone’s backpack. But that told me the hike was both popular and manageable by all ages and species.

As I mentioned above, we are uphill walkers, not mountain climbers. The key to it all is a manageable pace with few rest stops. I know if I attempt to speed up a climb, I am often winded, and at the end of the day, far more tired than I would be if I simply managed a slower pace and kept it up.

I invite everyone to enjoy the outdoors as we have done our entire adult lives. Being “in shape” is a gradual thing, so that if you don’t feel quite ready, proceed in small increments, gradually building up endurance, until you are ready for more challenging hikes. That process can take a few years, but they will be fun years. The key to enjoying the mountains is being in shape and able to enjoy them. If you are fatigued and dreading the return trip, you are probably overextended.