Ideas for blog posts are infrequent.  I think of it as sitting in the woods passively observing, when a rabbit runs by. I had no idea last evening that a rabbit was on the way to this blog in the form of a Montana man I’ve known (via the blog) for years, Big Swede. He dropped in to insult us, and indeed he can be infuriating because he does not read. Therefore, he gets to lay his business on us, and anything said in return will bounce off, unread.

His first comment was to deliver a video to “… all you deep thinking intellectuals who hang out here.” It was the video I offer below.

I have not watched it. I’ve better things to do than hang out with Tucker Carlson. But the point is that Swede (who will not read this post or come around again for months) really expects us to sit down and watch someone he likes say things that he agrees with. This is all Swede has ever done – throw the words of other people at us. That could well be because he cannot formulate on his own. For example, I responded to his taunt and video as follows:

“You’d have to define “intellectual.” I saw a Ted Talk one time where a guy described intellectuals (actually, college professors) as people who only use their bodies to carry their big brains around. I think to be alert, curious, skeptical and energetic (able to read and process long tracts of prose) merely makes one “intelligent,” not an “intellectual.” According to stats I have read, people who can do all that that are a small portion of the population. Further, with smart phones and search engines (that are programmed to lie), people are getting dumber by the day.”

(I should have added having a good memory is part of intelligence, but forgot.) Here was Swede’s response:

I define it as ”relating to your ability to think and understand things, especially complicated.”

There is though, intellectual snobbery or elitism. A trait common in college professors, think tank members, power hungry politicians and blog authors.

That was his mission, to deliver that last poke, at “blog authors.” He is pissed at me. If I respond to him, and I did to a later taunt, he will say that he didn’t come here to be lectured. I must remind you that in my experience, Swede is not capable of reading and processing long tracts. He’s a visual guy, a confirmation bias guy, and a guy who uses other people’s brains. 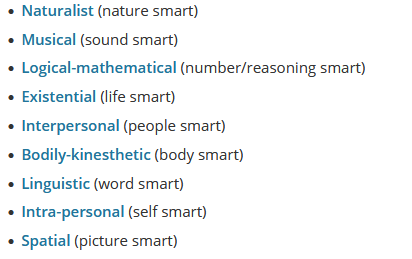 All of us without too much trouble can pick out several of those where we are lacking.Each of those is explained in the Vital post. I am not even sure I should have screen-grabbed the above, but it is all well explained there. (I could have just repeated it without citation, but I wanted to be sure that Mark Vital got due credit.)

Swede then hit us with his best shot. Asking “Does this one work here,” he gave us this:

And there you have it. Here is Mark Vital’s explanation of “Logical-mathematical intelligence:

Logical-mathematical intelligence is the ability to calculate, quantify, consider propositions and hypotheses, and carry out complete mathematical operations. It enables us to perceive relationships and connections and to use abstract, symbolic thought; sequential reasoning skills; and inductive and deductive thinking patterns. Logical intelligence is usually well developed in mathematicians, scientists, and detectives.

Jonestown was an event that took but a few days of cogitation to disassemble, and while hiking this morning I realized that I had overlooked even more than I knew. The mining camp that was used as the staging set for the event was located far off in the country of Guyana, but here is what I missed: No  one actually had to go there! They gave us overhead photos, easily seen to be of a mining camp, and a central facility where they congregated. All they needed do to create the illusion of mass death was to reconstruct that central building, probably on a Hollywood back lot, and then bring in some soldiers who signed NDAs to pose as dead bodies. The rest was creative fiction and some lifetime crisis actors. Congressman Ryan for some reason needed a new identity, and so faked his death.

The point is this, however: Swede does not possess logical intelligence, and so is incapable of looking at an event like Jonestown and doing anything other than swallowing whole. He does not possess the necessary skepticism, curiosity and patience to examine it closely. In fact, if he were to read this (he won’t come near it) he would run around and find an “expert” on the matter, or a video, and toss it all our way as if he had done his homework by parroting someone.

Anyway, my old buddy Swede, and all of the years I’ve known him has never had an original thought, and more importantly, everything he now believes is exactly the same as he believed when I met in him 2006. I hope he has a nice day.

One further note here: The people who are behind events like Jonestown are remarkably clever and resourceful. This site will take you to a 1967 CIA memo by “Chief, WOVIEW”, describing problems that they were encountering with the Warren Report on the JFK assassination. I’m not going to recount that subject, well covered here and elsewhere. What impresses me so much about this memo, which is the primary origin of use of the term “conspiracy theorist” as a pejorative and insult, is role reversal.

People who are dullards, who trust news and do not question authority, who do not think for themselves and go along to get along, are not very smart and yet are never called “conspiracy theorists.” And yet it is this kind of person who comes out on top when encountering people like us here at this blog. All he has to say is “Well, that’s some kind of conspiracy theory ya got there,” and the game is over.

That is not an accident. The term had to come from the behavioral psychology branch of CIA. That is so diabolically clever that I merely stand back and salute. This is how stupid people stay stupid, and how smart people never win an argument about the reality of any event, from JFK to Covid. All I can conclude is that this is a crazy planet, that we have to endure it, and that God must love stupid people, as he made so many of them. And oh, by the way, Swede, you are known to skip to the end of long pieces and just read the last sentence. This Bud’s for you.

20 thoughts on “An infrequent Swede visitation”