Several times a week I visit WUWT, or Watts Up With That, the amazing website run by meteorologist Anthony Watts. There he chronicles the entire Climate Change scam, naming names and calling out liars. They are all about, on a mission to distort reality for nefarious and vile purposes, which appear to be to impoverish us and reduce our numbers. The people behind climate change are criminals of historic stature. None can be trusted.

But I accept that about them, and I think as I read through WUWT that it is pointless to point out the lies and lying liars, as they know who they are and what they are doing. They are even rewarded. Take, for instance, David Viner, who laughably predicted in the year 2000 that Great Brittan had seen the last of this thing we call “snow.” It isn’t just stupid junk science and openly wrong, but also note that Viner is impermeable to any career damage caused by his own bad science. Here’s from his CV:

My goal had been to become a professor by the time I was 40, but this was clearly not going to happen at UEA [University of East Anglia, the beating heart of the Climate Change hoax]. I was offered a Chair by another university but it would have meant moving my family and we did not want to relocate to a different part of the country. I started looking beyond academia for jobs within commuting distance. The experiences I’d had working with various external organisations had made me positive about the idea of moving into a different sector.

Through a headhunter, I successfully applied for a newly-created post at Natural England – a new government agency – and became their lead advisor on climate change.

Do you see what happens to a climate change scientist when he gets it all wrong? Yes, promotions, offers coming over the phone, a load of compromising on the way to his horizon. Viner is impermeable to any damage to his reputation due to his silly, stupid and wrong prediction. There’s a reason for that. He is part of a public hoax.

Another example, Prince Charles, who has predicted we having our last chance at the upcoming COP26 conference. Charles is a public figure I regard as a kind of dunce, reminding me of George W. Bush, who was at least likeable and affable. Charles is hard to take. He has also predicted the end is near in 2009 and 2014. Here is the closing paragraph of this link, which I loved, written by Eric Worrall:

I think someone could make an awesome COP conference themed carnival ghost train ride. Imagine being strapped in, suddenly Prince Charles appears and warns you it is your last chance. As you’re wiping away the camembert and fine wine, Greta suddenly pops out of a box and starts screaming about her childhood. Travelling on, John Kerry slowly appears out of the murk, burbling something incomprehensible. Next a group of UN apparatchiks rush the train, thrusting random paperwork towards the passengers. Random activists appear at different points, screaming or throwing things. Finally, just as you think you can see a glimmer of light from the exit, Insulate Britain leaps in front of the train, and blocks the tracks.

There is no law against lying or being stupid, or in Charles’ case, so insulated that your stupidity is out in the open, featured in the Guardian. How nice to go through life in a can’t-lose coat of armor, or armour, as Charles would say.

There is, however something legally wrong when a government agency held in a position of public trust not only lies, but alters records to support those lies. The agency is NOAA, the National Oceanic and Atmospheric Administration. People have been tracking and measuring the number and strength of tornadoes for a long time, as far back as 1887 when John Finley published a book on the subject. However, until the advent of Doppler radar, reports required humans to witness tornadoes, and huge swaths of land were unoccupied. So a comparison of 19th, 20th and 21st century data is a challenge. Nonetheless, NOAA has been keeping track, and offers us the following: 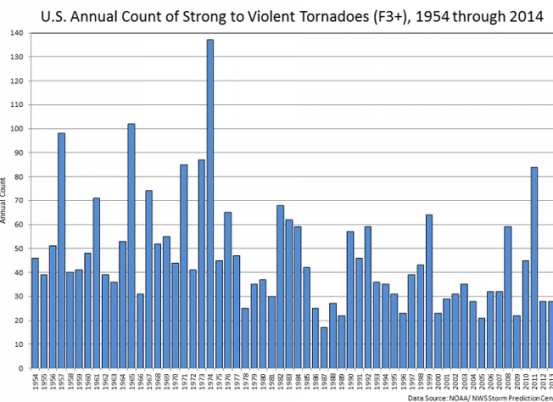 If you are familiar with graphs, you’ll have to perform a calculation with your eyes called a “moving average,” which will produce essentially a flat line for both the number and severity of tornadoes. You will see some years with many severe tornadoes, some years with few. That is called “climate variability,” something that, along with Viner’s stupid prediction, climate alarmists avoid discussing. The article in question where I got this information is called Inconvenient Tornado Data Disappears, by Paul Homewood, who, amazingly, had to go to the Wayback Machine to retrieve the data above. NOAA has trashed it, and replaced it with the following made up data: 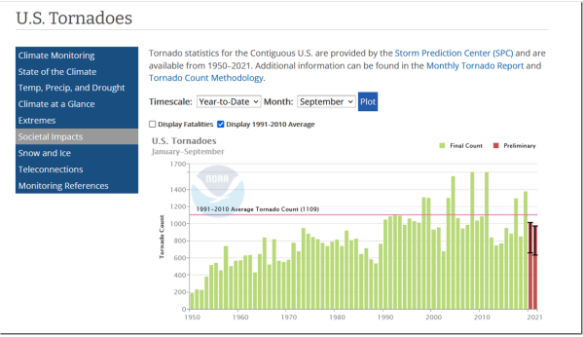 The period on display is 1950-2021, 71 years,. Says Homewood, “There is no discussion whatsoever of changes in reporting methodology, or any of the detailed work done by earlier scientists. All we have is the chart, along with a table, which dishonestly claims that tornadoes have become progressively more common. … This is not ‘scientific’. It is fraud, pure and simple“

NOAA is a public agency, and has violated public trust. By disposing of relatively accurate historical information on tornadoes, and replacing it with made-up data,  it has perhaps even engaged in criminal activity. But, like all on the Climate Alarmist side of the fence, there are no repercussions for just making shit up. Right, Mr. Viner?

I have learned that there is no sense in dealing with Climate Alarmism by confronting lies with facts and real data. That’s a wasted effort as those on that side know the data is wrong and do not care. From our side of the fence we must simply state the obvious: Their positions are absurd, their data made up … they lie, they lie, they lie.

31 thoughts on “Lies and lying liars at NOAA”