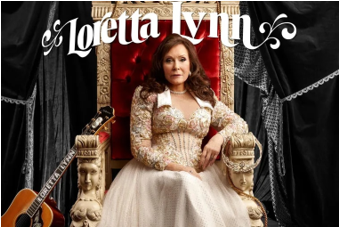 I have no interest in Loretta Lynn nor her music, but I still felt the need to compile this post since something about her Wikipedia profile just “sticks in my craw.”  But first, let’s get the Covid nonsense out of the way.

Well, I bundled up and Peggy Jean and I rolled out of Hurricane Mills so I could get this vaccine. I’m sure glad to get it and am sure ready to put Covid in the rear view mirror! And I enjoyed the mom daughter time, too! #winning #sickofcovid #stayhealthy #besafe #getyours,” Lynn posted on social media.

I have a few questions for Loretta:

The photo above is the only evidence we have that Loretta got jabbed, and it is fake AF.  That face is pasted in and notice how they have her wearing a black scarf to avoid mismatched skin tones.   And since the building behind her has a playground, I guess this celebrity millionaire got her poke at an elementary school?  (I’m shocked that they didn’t place her likeness in front of a Walmart, although the building does look similar.)  Call me cynical, but I’d bet dollars to donuts that Loretta never left home, didn’t write that post, and never received a vaccination.

Loretta’s Wikipedia page informs us that she was named after the film star Loretta Young.  My immediate suspicion was that the naming was due to familial connections, not because Lynn’s parents were star-struck cinephiles.  Well, It didn’t take much digging to discover that Loretta Lynn had a maternal great-grandmother named Mary Watkins from Kentucky, and Loretta Young’s grandmother’s name was Fannie Watkins who descended from Kentuckians.  Fannie just happened to die in Nashville, Tennessee (home of country music.) 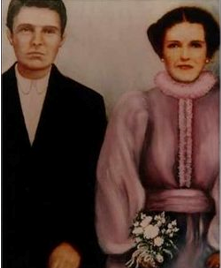 Lynn was born Loretta Webb (a huge peerage name, Queen Elizabeth is a Webb.) in BUTCHER Hollow, Kentucky.  It is probably no coincidence that her paternal grandmother’s name was Amanda BUTCHER (pictured.)  So, they don’t just live there; they own it.

Of course, we get the usual sob story about the poverty-ridden Webb family who just happened to produce not one, not two, but four successful country musicians, two of them bonafide stars (Loretta and Crystal Gayle.)

On January 10, 1948, 15-year-old Loretta Webb married the 21-year-old Oliver Vanetta “Mooney” “Doolittle” Lynn after a month-long courtship.  To this day, Loretta claims that she was married at 13 and had popped out four children by 18.

According to Loretta’s signature song “Coal Miner’s Daughter,” her “daddy worked all night in the Van Lear coal mines” and “all day long in the field a hoein’ corn” and her mommy “scrubbed our clothes on a washboard ever’ day” till “her fingers bleed.”  So, did Ma and Pa Webb permit Loretta to marry so young because her husband could assist with farmin’ and tendin’ to the young ‘uns?  Apparently not, since Oliver and Loretta promptly left Kentucky and moved to the logging community of Custer, Washington, when Loretta was seven months pregnant with the first of their six children.

Could they have moved any further from Butcher Hollow?  Not without leaving the country!  We are told that “Doolittle” Lynn was uninterested in coal mining upon returning from the war.  Still, after marrying Loretta, he decided to relocate to Washington for “better work opportunities” in a “logging community?”  As of the census of 2000, 299 people were living in Custer.  I suppose when opportunity knocks…

At the time of Loretta and Oliver’s move, the Webb family had three sons of 14, 11, and 7 years of age and two daughters aged 5 and 2, so why would they allow their eldest daughter and most competent helper to be taken so far away by a veritable stranger?  Well, considering that Oliver Lynn and Loretta Webb share the same great-grandparents, they were anything but strangers.  I believe the term is:

The gentleman pictured earlier with Amanda Butcher was Alexander Webb (Loretta’s grandfather), brother of John Monroe Webb (Oliver’s grandfather.)  Appropriately, their mother (Loretta and Oliver’s great-grandmother) was named Isabella MUSICK.  I have never seen the award-winning movie “Coal-Miner’s Daughter,” but I somehow doubt the film addressed this “close kinship.”  I mean, imagine how uncomfortable it would have made the audience feel during kissing scenes between the blue-blooded, polo-playing, ivy-league roommate of Al Gore and Sissy Spacek.  Unless, of course, you’re into that sort of thing.

Oliver Lynn may have also been Loretta’s MK Ultra handler.  In World War II, Oliver Lynn served in the United States Army, and the Army was the military branch most closely associated with the CIA’s MK Ultra program.  Custer Washington would have been a perfectly remote locale to perform the psychological and physical abuse required to create a mind-controlled slave.

“I married Doo when I wasn’t but a child, and he was my life from that day on.”

“Doo was my security, my safety net.”

In 1971, Lynn began (or was assigned to) a professional “partnership” with former U.S. Army veteran Conway Twitty (Harold Lloyd Jenkins) which lasted into the 1980s.  At work or at play Loretta was never far from an Army “influencer.”  FUN FACT:  Twitty was named by his great-uncle, after his favorite silent-movie actor, Harold Lloyd (meaning they are probably related.)  As usual, military and Hollywood connections abound. 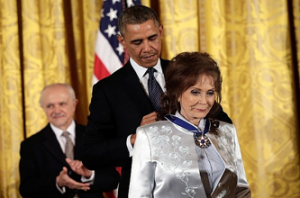 When you shake all the stardust off this tale, what you must begin with is an uneducated child from one of the most isolated cultures in the United States who was given in marriage to a man some six years her senior, a man who was a violent and sometimes brutal alcoholic, who was similarly uneducated and without any job skills to speak of. Add to that a migration to the state of Washington, where the child had no friends or relations; the arrival of four babies; regular—and reportedly mutual—domestic violence; and an income so unstable that there were times when the family had nothing to eat but dandelion greens, and you have a situation that might well have led to murder. But what actually happened was so improbable, so unimaginable, that the lives of Loretta and Mooney Lynn became one of the great legends of the twentieth century.

Loretta Lynn was probably the country music version of Britney Spears during that era.  Of course, we had no reason to suspect because a mind-controlled celebrity was much easier to conceal and control before the internet and social media came along.  Throughout the years, the Loretta Lynn persona has been used to promote politics, patriotism, religion, and the fact that “men are pigs.”  She has released 46 albums and spent nearly 50 years touring on the road before suffering a stroke in 2017.

Doo kind of kept things going, like me recording.  He would say, ‘You know, we need to get a new record out,’ or whatever.  He always kept me moving.”

Let me guess…so “Do Little” wouldn’t have to?

They probably only rolled Loretta out when necessary and then propped her in a corner when not in use.

Though Loretta Lynn’s location at the time of the crash is undocumented, Loretta’s younger brother, Herman Webb was riding in the pickup truck bed belonging to Loretta and Herman’s father, Melvin Theodore “Ted” Webb. Herman heard a massive explosion unlike anything his family had ever experienced despite living in a coal camp accustomed to loud blasts.]  After Stewart bailed, the P-47 flew across the Webb Family cemetery, crashed into a hilltop overlooking the Webb Family home, and created a 10–15 foot deep crater. Over the course of several days, local boys and men began to ransack the crash site. One eyewitness saw Loretta’s 22 year-old moonshiner husband “Doolittle” Lynn, driving his Jeep with Stewart’s plane propeller attached to its side.

I would say that you can’t make this crap up, but It’s pretty clear that they can…and do.