The most amazing thing about this video is that Glen Campbell was not classically trained and did not read music. Nuff said.

This reminds me of two other musicians who were not classically trained and did not read music, Paul McCartney and John Lennon. The difference, I think, is this: Lennon and McCartney did not write their own music, and when in studio, did not play their own instruments. That is my studied opinion, and as always, I could be wrong, but one thing to note of McCartney: Early on, with  a song like Michelle, he was doing chord progressions that are learned in classical training. Lorne Michaels, the man behind so much developing of talent on Saturday Night Live and now everywhere, said of McCartney that he is a “f****** Mozart.” I am a little less gobsmacked, and regard McCartney as a f****** phony, along with Lennon.

Yes, they learned their chords, they learned to live in public as charlatans, performing music written by others, claiming it as their own, and using studio musicians (Glen Campbell was a member of the Wrecking Crew) and claiming the work as their own. Something that struck me as odd, in 1969 Lennon and McCartney sold the publishing rights to their music for about 1/5th value to a consortium that included Michael Jackson. We are told that the two were young and naive, but that does not fly, as they were surrounded by power and sophistication that would not allow such a deal. I have an alternate theory, that the deal went down without participation or consent from either of the two, as they did not own the rights to the music. Take it one step further – perhaps behind the scenes there was resentment by those who really produced the music, wanting to cash in on their own, pushing the two “geniuses” aside.

Who can know. At my advancing age I have sort of an eye for real talent, and for phonies. Glen Campbell was a diamond in the rough, a genuine and massive talent, self-trained. He is credited with co-writing maybe one song, Turn Around, Look at Me though Jerry Capeheart took full credit on his own, so Campbell never got a dime in royalty. The music business is full of fakes and phonies, so I know without much research that Taylor Swift is an Autotune baby who does not write her own music. I’ve mentioned The Carpenters often enough, and was given a list in the comments yesterday of other female singers said to be equally impressive, including Cass Elliot. My only weakness regarding Karen Carpenter (and Cass Elliot, aka Ellen Naomi Cohen, another massive talent) is that I suspect her death was faked, that she was pushed out of the business for singing about romance in a time when the future had been mapped out, and that old fashioned songs like hers and Richard’s would be replaced by heavy metal, hip-hop, so that they had to step aside. Men were to become pigs, and in the Carpenter’s world, they were not that at all. 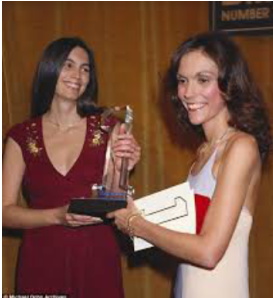 I was told by someone who admired The Carpenters that women suffering from anorexia nervosa often grow large heads disproportion to body size. That’s nonsense, though I will concede that starvation can diminish the body while the skull remains unchanged in size. That sentiment might be a response to late-life photos of Karen such as the one to the left, an obvious dark room paste-up. Ask yourself why Karen is wearing a track suit and a placard that says she finished first. What the hell is the trophy for? Karen was not known as a track star. And judge for yourself the perspective – the two heads are far apart in the original, but Karen in the photo seems much closer to us than to the other woman even as their hands are nearly touching. Shadows and skin tone do not work either. It’s just sloppy work.

Anyway, I just stumbled upon Glen Campbell’s amazing performance doing the William Tell Overture on a twelve-string this morning. I did not plan on putting anything up on the blog today. This just rolled out. Have a wonderful day.