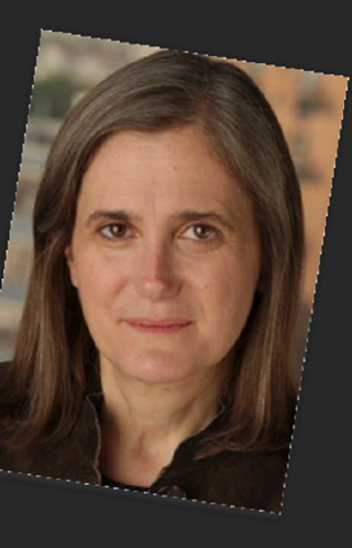 I have been looking for Janis Joplin for weeks now, and found her. She became Amy Goodman, host of Democracy Now!, an alternative news program funded largely by the Ford Foundation. Want proof?

The immediate left above (and right above that) are of Goodman. She put this photo out in a documentary on peer pressure for young girls. So we have no doubts as to that photo, as Goodman herself asserts it is her as a young woman. (Oddly, any information about the person in the photo is cropped out of all versions seen on the Internet.) On the right is Janis Joplin, an undated photo that had to be 1970 or before, since she supposedly died that year. Here is what we get when we compare the two: 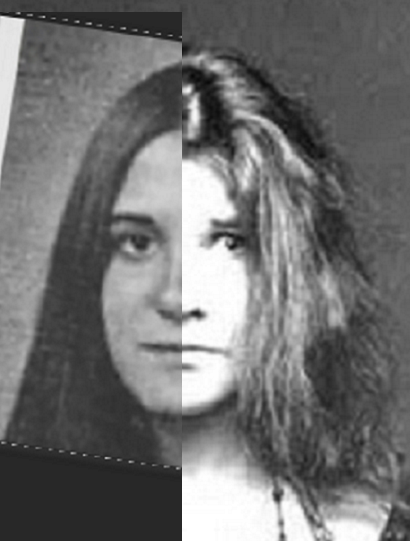 Matches do not get better than that, and I excitedly emailed MH this morning to announce that I had located the elusive Joplin. He responded “Weird. I tried that one and didn’t match for me. Maybe I matched the wrong twin?” We have been running into twins now and then. MH has a long list of possibilities. More about that in the future. 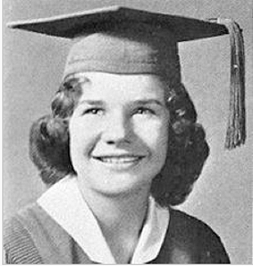 In order to be thorough, I grabbed four more photos of Goodman against those I already had of Joplin, but encountered difficulties. Some matched beautifully, others not.

To resolve the matter. I decided to match the Joplin photos against each other, starting with the one on the left here, which Wikipedia tells us is Joplin’s high school graduation photo from 1960. I matched it against the one of Joplin seen above, the same one that matched up so well with Goodman. They did not align. Janis Joplin did not match up with Janis Joplin. 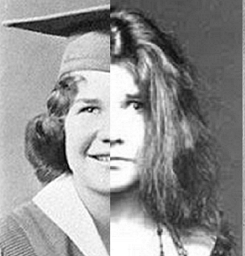 We have encountered this before. When people do not align with their own photos, we recheck our measurements, and try again, and then try against other photos. With enough results right in front of us, we know we are dealing with twins. MH was dead-on. Janis Joplin is twins.

One of them transformed into Amy Goodman. The other I do not know, although MH has suggested I try  Janet Reno. I did that once and it did not work, but I’ll try again with Twin #2. Today I am all Joplined out. But to finish out this round, below are Amy Goodman and Janis Joplin, Twin #1, side by side. 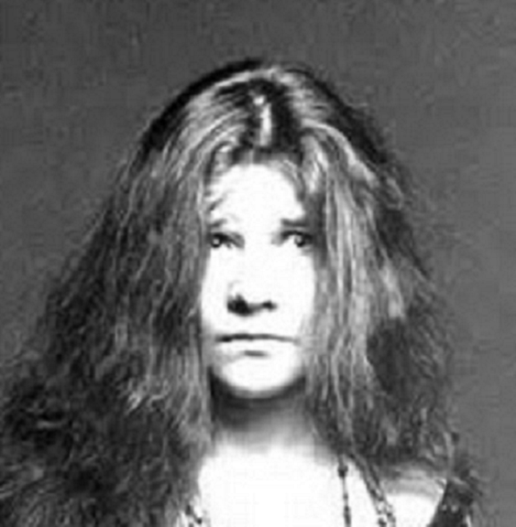 Hello Janis! I knew you were still alive! I just knew it! Of course, this match-up presents problems. Goodman is said be have been born in 1957, Joplin 1943. Goodman then is 59, Joplin 73. I have wrestled with this. Since facial match ups like this are extremely rare, I took a closer look at Goodman. She has always struck me as a dour kind of person, humorless and matter-of-fact. In the photo above, which I blew up on my screen, it is easy to see she is heavily pancaked with makeup. Her lower jaw is protruding, as tends to happen to us as we enter old age. Her hair has been gray for years now.

On the other hand, Joplin, would be close to 27 in the above photo, labeled “circa 1970.” She could as easily be early-to-mid twenties if not late teens. So if we split the difference between them, suppose we guess that Goodman is not 59, not 73, but rather 65. Since they lied to us about her death and having a twin sister, I don’t imagine that we can rely on age or published date of birth for either.

However, age is a problem. All the other evidence is overwhelming, however, so I am settled on the idea that Goodman is older than she claims, and Joplin younger.

To close out here, below are two sets of photos, the first of “Joplin Twin #1,” the one who became Amy Goodman.

And these are photos of Joplin Twin #2, the one whose whereabouts we do not know. 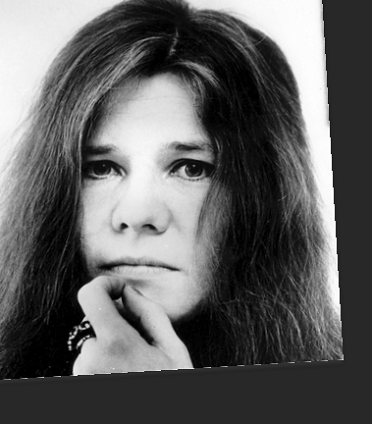 Notice with Twin #2 that we actually see her teeth in three photos, where #1 is taciturn in all five, as Goodman tends to be. Twin #2 is probably still alive, and we will continue to look for her. I’ll re-check Janet Reno, and even Sally Jessy Raphael, with whom we thought we had a match weeks ago.

All of that stuff about Janis being an alcoholic and drug addict back before her death, maybe one of them was that, but I tend to doubt it. They were in training, learning to conceal their true identities in public and to be actors, to be people they were not and be convincing about it.  All of the photos that I have seen of them are of a pretty young girls with clear eyes and innocent faces. I suspected long before today that Joplin had clean habits back then, as now. But maybe not. Who knows? I don’t imagine Intelligence has much use for drunks and addicts, who tend to be undependable.

Which one was the singer? That I suspect to be twin #2, who exudes more emotive qualities than #1 in the photographs. They could have, like Paul and Mike McCartney, switched off. I’ll have another look. Not today. Joplined out, as I said.

(Which one had sex with Kris Kristofferson on first meeting? Neither. That was just planted rumor stuff, common as gerbils in Hollywood, press agents at work.)