Pieter van Ruijven (1624-1674) loaned Vermeer two hundred guilders on or about 1657. There is no certainty as to why but I will construct an unverifiable narrative that breaks no laws of the physical universe nor confounds human nature within the context of the threadbare facts known of these two men’s lives. Van Ruijven had money; not massive amounts, but investment money. He played angles, something of a gambler, but a reasonably legit business man for the most part. One of his financial concerns was art dealership. The laws of the land forbade van Ruijven from actually dealing in art. The kind of man he sought out to front for him was financially brittle, with many mouths to feed and open to turning what skills and access he had to broader opportunities. This of course was Vermeer, guild member and legal art dealer. So too, he could handle a brush. The pairing allowed for van Ruijven to gain access to paintings and for Vermeer to exercise his photographically accurate rendering skills to copy said paintings.

The copyist, that being the copier of original art, was a legal and potentially lucrative position within the guild framework of the art market. Vermeer had to have made the bulk of his professional income from copying proven sellers. There is no other use for a craftsman of his particular skill set given that Vermeer’s originals just did not sell in his lifetime. Vermeer was underwritten to make copies selected by van Ruijven and obtained by Vermeer. Where and how van Ruijven moved these copies I can’t say, but Northern Italy, specifically Venice, would be a good guess.

Take a good look at The Glass of Wine. The couple seem to be no more engaged in reverie than a patient drinking a formula prescribed by her attending physician. The composition is geometrically engineered like a perfectly tuned instrument.

It is genius in design, yet as soulless as a museum diorama. How could a man with an eye for design as great as any forget to breathe life into the models depicting an event usually fraught with danger and desire? In my opinion it’s because he is still learning how to utilize the new contraption van Ruijven has loaned money to Vermeer to obtain. That contraption is a camera obscura, the very latest in technological marvels that replaces and upgrades Vermeer’s concave mirror. The camera obscura allows Vermeer to replicate the entire room rather than the half length, floor-less interiors the concave mirror could accurately report. And even more important, the camera obscura’s depth of focus is many times greater than the mirror.
The Glass of Wine is Vermeer getting close, but having struggled to pose his models as carefully as the furniture, they stand and sit with the rigidity of dress dummies. 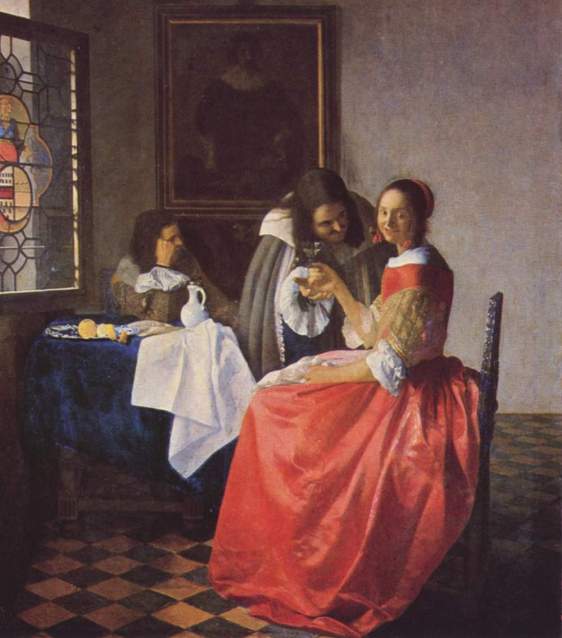 Now take a gander at The Girl With the Wine Glass. The problem is solved to the point of overstatement. The fawning “gentleman” has clearly charmed this woman into a stupor. His wingman in the corner has played his part and is drifting off to a blackout. The wholesome young lady is likely to lose her maidenhead and looks at the viewer  without comprehension. Her virtue is toast.
I would venture to say this is some kind of object lesson for young women, specifically Vermeer’s growing brood of daughters, to stay away from the taverns- including the one across the square that Vermeer’s family has been running for a number of years.

Another element, unverifiable even though it is right there for all to see, is Vermeer using the same male model to play both roles. And an almost perverse touch is the portrait on the wall that suggests the same class and rank as the devious enabler. Here we have a man of means, represented by his ability to afford and justify a formal portrait, not restricting his reprobate behavior to the bordello; a further caution that the appearance of culture does not preclude an underbelly of vice. It appears as a triple portrait, another trick allowed by the mirror projection systems then in vogue. I would not go so far as to say that is van Ruijven doing the posing, but my profile of the investor wouldn’t contradict the possibility. I have no other male candidates who would be so enthusiastic as to participate in Vermeer’s development in this way.
Shifting Focus
From here on its important to note the sea change in Vermeer’s subject matter. His first attempts depicted life as a pub owner might see his charges as they bob and weave through another night of escape from reality. The Procuress, the Sleeping Girl, the two men standing over young women, determining their fate by getting them drunk gives way to family friendly tableaux featuring young women engaging in more virtuous pursuits, notably as music students. This has to be a reflection of the maturing father of a growing family overwhelming the odds by producing one daughter after another, and having the understandable worries attending this development affect his creative life.

The two models from The Girl With the Wine Glass return quickly in Girl Interrupted at Her Music (Lesson?) This time the attentive student is startled by the intrusion; not because of embarrassment but from mild irritation at having her concentration broken. The rogue of the earlier work is now the benevolent pedagog, almost angelic in his beneficence. The threat of degradation from the grip of demon alcohol has been completely washed away.
To compensate, Vermeer has darkened the scene and let the chiaroscuro hold the tension. The muted Cupid in the painting on the wall will return in bright light in Lady Standing at a Virginal a few years later, but here I believe the specter is not insidious but allegorical, a hint of secular spirituality standing in for creative inspiration, nothing more.

Parallel Universe
Down the road in Leiden, a contemporary named Gabriel Metsu was working the same market as Vermeer. Here is Metsu’s take on the same situation in the music room.

A young woman takes notes from the master on tempo. The viewer is not part of the narrative as in the Vermeer, the lighting is standard ambience-TV lighting as it might recently have been described. The basic tricks of the trade are all in evidence, from the accurate perspective to obsessive detail in the clothing. There are even paintings, as in many Vermeers, on the walls advertising the artist’s copyist skills. It’s serviceable in its own way and Metsu moved product. He was employed by the prosperous to paint family portraits.
The question then is why, if we can agree on the superiority of the Vermeer, it was Metsu who sold? This is the fundamental question for me: Was Vermeer considered aesthetically undernourished in his day? My answer is yes.
The abhorrence of empty space is termed “horror vacui”. It is a common syndrome for the impulsive, the impatient, the thrill seeker, the addict, the undereducated/over employed who have the discretionary income to blow on wall art. Metsu gives the buyer more than the scene needs- he treats everything with equal weight and therefore nothing has any particular value. The interaction between the two players is as dynamic as the action between the water jug and the drapery. The stasis has encased this meaningless moment in forgotten lives like flies in amber. But it has stuff in it. Look at the dress. Look at the gold frame. Look at the hair. Parts, lots of parts.
Today we recognize Vermeer’s restraint as a virtue. But old paintings go up in value just by surviving. The wealthy pay dearly to possess them. They give grants to historians to explain in writing why this painting or that is worth millions in investment. The scholar and his prejudices takes over from the long dead consumer and his impulses in order to assign new value. Vermeer appeals to the modern aesthete. Metsu appealed to the consumer of his day. Vermeer’s objectives were not self sacrificing- he had hungry children; four of fifteen didn’t make it out of infancy. The idiotic caricature of this man brooding alone in his second story studio, wrestling with aesthetic problems as he laboriously crafts one or two pictures a year is ludicrous. Vermeer was experimenting with technique and composition to make his own paintings sell better. But he was clearly a copyist and van Ruijven basically bought the camera obscura for Vermeer to reproduce other people’s work. Vermeer’s attempts at getting his own name established was a side show. His struggle to that end, trying to make a name for himself and selling at Metsu prices, never materialized.

Gerrit Dou, Metsu’s Leiden Master, can be targeted as one of the sources of Vermeer’s plight. Largely dismissed today, Dou was the man to beat at the time, at least for the fijnschilder (fine painters) school of which Vermeer is the now often misidentified preeminent example. What Dou was selling was melodrama- always a populist sentiment.

Here in The Dropsical Woman, Dou lays it on thick, with women in peril and a male savior eyeing the mix of his lifesaving potion as the divine light from the left lends science a hand. The detail is obsessive, the light overly dramatic, the Holy Bible open to the appropriate passage should darkness fall- the same basic design as a Vermeer and yet as far removed from his temperament as can be. Tastes change- some cash in and others win over history.