Warning to readers: Below the fold are some gruesome photos of an alleged execution of a young Vietnamese boy in 1968, the famous Saigon Execution photo by famous war photographer Eddie Adams. I am convinced it was faked, and so have no problem showing both it and a related film clip of the incident. If you are squeamish about blood, be warned, read no further. If you do, take comfort, as it is fake blood.

Tyrone in the comments a while back gave us the images of Napalm Girl in a kind of “the making of” film clip. We were able to easily demonstrate that her Famous Photo was staged, and that Phan Thị Kim Phúc, the screaming girl running down the road, was acting then, and still is. She was not wounded.

This led to a post and a long comment section on Hanoi Jane wherein I concluded (though not with unanimous support) that Jane Fonda probably never went to Vietnam, and that her famous gun turret photos were also staged, her face merely pasted on other bodies as seen to the left.

Not too long after came Tyrone again, this time casting a skeptical eye on the famous Kent State photo of the girl crying over a victim. Someone had just been shot, and yet people were milling about or walking on their way to classes, hardly taking notice. It too was staged.

Jane Fonda’s little exercise was obviously designed to increase support for the Vietnam War by isolating and alienating the antiwar movement from the mainstream. But Napalm Girl and Kent State were meant to have the opposite effect, to demonize the military and increase public opposition to the war.

All the events were faked. The same arm of government, the propaganda arm, was behind all of them. They apparently did not care which side we were on.

Today I’ve been examining another famous was photo, known as the Saigon Execution, by AP war photographer Eddie Adams. Here is the photo.

Adams says in interviews that at the time his shutter went off, the bullet was in the head of the young victim. I am not sure how he would know, unless he was in the dark room when they did this photo. It is a fake. So is he.

At the same time that the Famous Photo was supposedly being taken, a film crew was covering the incident.  Below is a ten-second clip of the incident that Adams supposedly captured on camera. Again, while it is meant to appear gruesome and cause you to turn away, it was staged. No one was harmed that day.

Below on the left, again, the Famous Photo. Remember that Adams says the bullet was in the boy’s head, so that his shutter went off at the instant that the gun was fired. On the right is a screen grab of the exact same moment as taken from the YouTube video Execution of a Vietcong Prisoner. It should match the Adams photo. It does not.

You might suggest that a recoil caused Loan’s hand to bounce back, creating the differences in arm angle, but watch the clip again and you will see that the gun did not recoil at all. This indicates it was either not really fired or was firing blanks.

Imagine a movie set where everyone is in position and the director yells “And … action.” Everyone moves as scripted, Ngọc Loan raising the gun and firing, Văn Lém falling, the policeman behind walking across the set, the blood being squirted near the head while soldiers move about to obscure the fakery. It takes several takes to get it right, and so there are going to be differences, which is why the filmed version is so different from the Famous Photo. The filmed version was one of several takes, while the Famous photo was a studio compilation with some pasting – the backdrop taken separately and added, lighting added to Văn Lém’s face to highlight the horror … in the end, they say “good enough.”

There is more. Below is a series of screen grabs from the video of the shooting (with some narration on my part). In this sequence, pay attention to the areas I have circled, the supposed blood from Văn Lém’s wound.

The young man has fallen, but blood is only apparent perhaps a foot or more from his head.

More blood has been supplied from a source off camera and to the right, and is running towards the victim.

Yet more blood is supplied from off camera, and running in a stream closer towards the victim’s head.

If you go back now and watch the ten-second clip, you will see how the blood appears to be not from Văn Lém, but supplied by some device from behind the soldier standing on the right. He was positioned there to hide the real source. 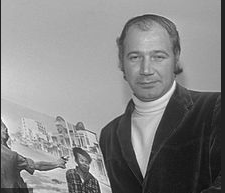 So we have two scenes, one of which Adams could not have photographed, as it is far too different from his Famous Photo. We have blood supplied from an off-camera source. We are in fact looking at a professional production complete with crew and actors. The Famous Photo is a carefully designed paste-up. Only one thing is missing from the set that day – something critically important – was not there: Eddie Adams. He did not need to be there. He did not take the photo. Check him out here, if you can stomach such a liar.

Nguyễn Ngọc Loan was chief of South Vietnam’s national police. He supposedly committed murder in front of the entire world. While we might assume that Vietnam was a lawless place and that this was an act of war so that there were no consequences. What he did was a heinous act and a violation of law under any circumstances, anywhere. Even in wartime police are not allowed to randomly pull people aside and kill them. I know such horrible things happen in war. But such deeds are done quietly and away from cameras. No one wants to become a target of either a justice system or the enemy. No one puts on a display like Ngọc Loan did unless done for unstated purposes. In this case the purpose was to create agitation propaganda aimed at the American public.

So why did the American propaganda people agitate both for the war (using Jane Fonda) and against the war (Napalm Girl, Kent State, Saigon Execution)? It is easily understood – public opinion in our country is managed, but never heeded. It is a nuisance and so has to be focused away from the real action. They are saying “Hey! Look over here! Not over there!” Our leaders did not care if we were for or against the war, as our opinions did not matter then any more than now. They only wanted us fighting among ourselves and out of their hair.

The Famous Photo was taken in 1968. The war would go on another seven years, a fake war on our TV screens and in our newspapers. There was also a real war, about which we know very little. It was hidden from view.

24 thoughts on “The execution of Nguyễn Văn Lém: Another Famous Photo is fake”