For the record, I am more in agreement with Mark today than I would have been when I wrote JFKTV. The notion of JFK being gay, though, strikes me as unreasonable. There is no solid proof at this late date. No rumors that I can recall. Pictures of him and Lem Billings horsing around as kids is today read as possibly gay but that’s part of the gay agenda- today celebs are assumed gay until proven otherwise, but it is emphasized that that isn’t a bad thing. Gay is so normalized in the media it is hardly news and always seen as a positive. 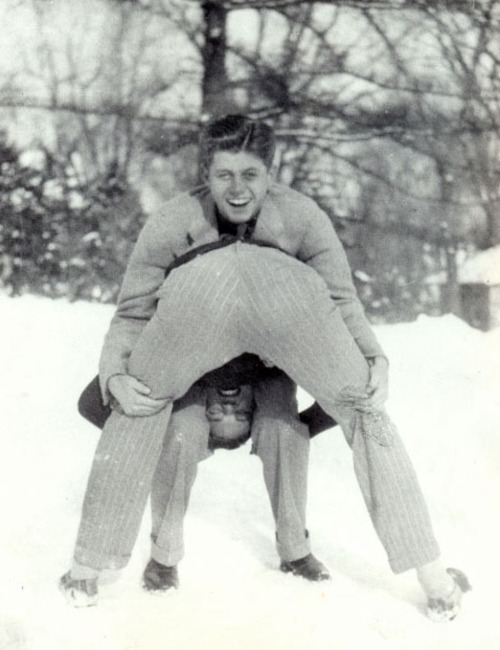 Today that picture screams gay. I horsed around with other guys when young but its a guy thing. Horsing around, that is. Young guys are gross and coarse and why women are the people that make culture possible. They mature men fast, if the men want nookie. Some guys, like JFK, never really mature socially. Women don’t flip their switches when they enter the scene with the hormones. They stay in pre-sexual mode. That is not ipso facto G.A.Y.

I think that JFK was latent- that he had no libido at all and that Lem Billings was a buddy with similar issues and later, because of long term proximity, JFK’s handler. I feel the same about Jedgar Hoover. He was not a tranny or Clyde Tolson’s bitch. Tolson was likely Hoover’s handler. The men in the spotlight have no real power*.  The guys next to these public posers deliver the messages to and from the hidden hands to keep the public lint catchers on point. That’s ‘handling’. The marriage to Jackie was arranged to give this holy womb proper context. IVF’d children are probably a given with these inbreds, given that there are so many real gays (Hollywood) and asexual drones (Government) in their ranks.

I know men with no pilot light lit and they aren’t that happy about it. Frigid women, too. They become rigid in outlook, even hostile, though that describes Hoover better than JFK. I think Kennedy was what is known in baseball parlance as a clubhouse cut up and possibly a drug taker beyond his alleged maladies. He took little seriously save for his line readings on the stage.

Was JFK jr the bastard whelp of Ari and Jackie? A quick gander at the man identified as Ari’s son, Alexander, supports that position. 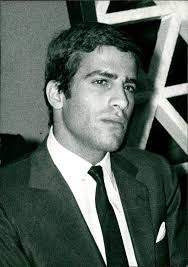 Ari had his pick and these male offspring would get a full head of hair from daddy and the rest from the bombshell du jour a rich and powerful man would favor. Alexander allegedly went out in very Kennedy-esque fashion via yet another plane crash. His sister, Christina, also died young, but in a bathtub like a rock star. Rich and famous ain’t for everyone.

That said, Aristotle Onassis was a shipping magnate. The cargo he moved would belong to more powerful forces than he. In the food chain he may have been above JFK but he would be below whomever was paying him to ship, likely drugs, around the world. The guy has always looked like the quintessential mafia don- a ‘made’ man- somebody else’s bitch. He was also a public figure who had movies made about him. He, too, had a role to play. (What’s love got to do with it?)

For a time I thought King Constantine II of Greece, then crown prince, knocked Jackie up but now I think that would have been beneath him. Though that monarchy proved eminently disposable, the level of the Kennedy add-on, Bouvier, may have been part of a different, lower (oh, okay, Jewish) blood stream. Not quite up to snuff for royal blue.

Speaking of royals, the matches made for public consumption are never cut and dried couplings. Dynastic succession behind the curtains is a roundelay of mixing and matching we serfs can never be fully privy to. 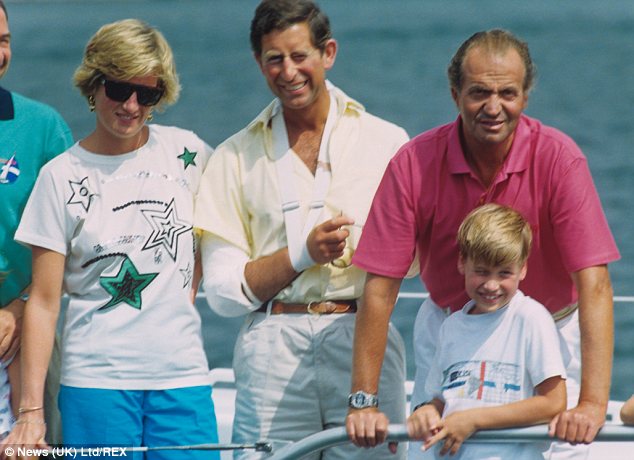 For example: This is a picture of Spanish King Juan Carlos being the alpha dog he is. That’s prince William he’s over-lording and spells out perfectly what I and others have long believed: That Wills is actually Juan Carlos bastard and not the poof’s with the busted flipper.

What the real pecking order is with these people would take the skills of the alliterative one to shovel out but it appears he’s closed for renovations.

Next time: Caesar and Cleopatra’s secret daughter. Yes, there really was one.