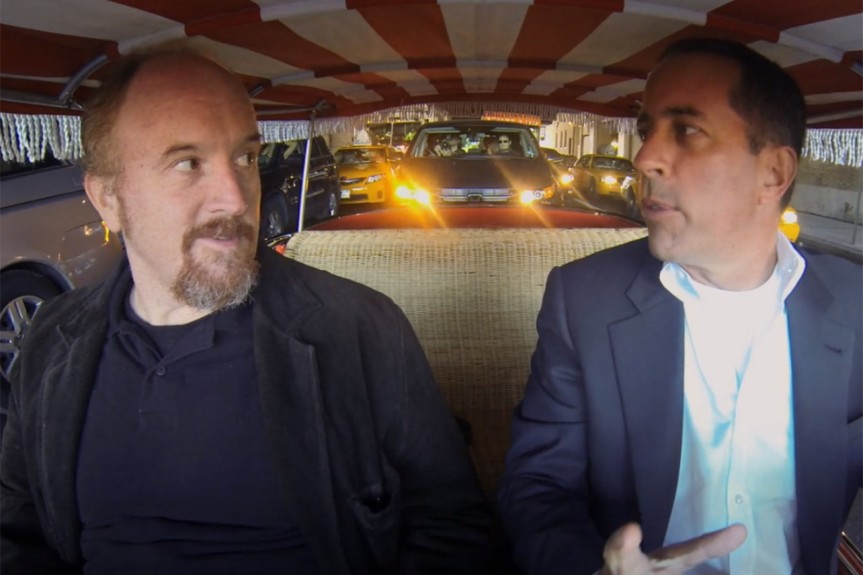 I did some research into the matter of Bill Cosby and his alleged drug-induced rapes in an earlier post, and thought the whole matter to be a hoax, though Cosby’s participation left me scratching my head. Recently Miles Mathis added a twist, suggesting that perhaps Cosby is deep in dementia, and so had no clue what was going on around him. That has legs, in my view.

I found that of the alleged 26 rapes he committed, there was not one police report or rape kit, a standard tool used to preserve evidence in these cases, even when there is no legal proceeding. The notion they are pushing is that each victim was too intimidated by Cosby’s fame and power, and too fearful of bad publicity, to report the matter to police. That might be true in a few cases, but not 26.

Something else came up a while back … Jerry Seinfeld’s Comedians in Cars Having Coffee featured the comedian Louis CK. Someone a long time ago mentioned in the comments that CK are letters 3 and 11, respectively, in the alphabet, so that his name is a spook signal, 3×11=33.  That’s hard to grasp, as what would his role be other than to taint the public dialogues with very bad taste? Seinfeld is a clean comic who works very hard at just being funny. CK is graphic and tasteless. I avoid him. The two don’t belong in the same car.

In the episode featuring CK, if you watch the entire show, you’ll find at a certain point that CK tells Seinfeld that Cosby had confided in him about the rapes, matter-of-factly. (The show can be seen on Netflix under the “Late Night Espresso” series. I am unable to link to it.) This would explain the spook factor, as CK is doing his part in advancing a hoax. His role may be small, his fame manufactured, his humor off-putting and gross, but he is hard at work doing his job. He would be a minor spook, but a spook nonetheless.

PS: In attempting to link to my piece on Cosby, I found that its name. “The Bill Cosby Accusations” had been changed to “trashed-17.” I did a Google search for the piece under its original name, and found that it doesn’t turn up. I can usually find my own pieces that way. I am wondering if only I can see it now, and if WordPress has removed it from public view. I ask that any reader use both the POM and Google search engines to locate the piece just to be sure I am not self-referencing. Put my paranoid suspicions to rest, please. This is not the first time a blog piece has gotten some funny business. I re-dated the Cosby piece 12/1/2019, so it should appear on your screen (along with 60 comments) if you scroll down on this page.) I also re-published it under its original name on that date, so you should see it twice, once without any comments.

9 thoughts on “Afterthought on Cosby”