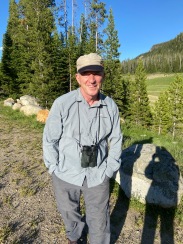 A brief word on an exchange yesterday under the post titled A project Gone Awry: Transcribing a Kaufman Interview. Ordinarily I don’t much care what goes on in the comments here. People get in arguments, change the subject, sometimes get testy. All in good human fun, as the people who frequent this blog are usually smart and opinionated. However, I took issue yesterday with Maarten for the following reasons:

The photo above, by the way, is me, a real human being with good and bad qualities, abilities and shortcomings. That’s how I look, now at age 70. My wife took the picture, as you can see by the shadow. Photography is a strong point for neither of us.

At first I merely closed off comments on the post so I could gather my senses and behave properly. I then decided that the best course of action was to remove the offensive comments, which I did. With them went every response to those comments, including my own.

The comments are still alive and in the trash bin, which I think does get emptied by WordPress on occasion. I’ve got time to think about it, and if I approve them again, all the responses will reappear to. I’ll probably put everything back today or tomorrow. But for right now, Maarten has, in my view, gotten carried away with his own mental and moral superiority, and that chafes. He is not banned, as he’s been a friend of the blog for too long for such an indignity.

I do, however, need a break from him, and probably, he from me.

53 thoughts on “A word about yesterday’s exchanges”