I start from the basis of the theory that James Paul McCartney is dead since September 1966 and that he was intentionally.

I do not get involved in theories such as, many doubles, twin brother or that he is alive. Nor do I get involved in comparisons of faulized photos that flood the web or in declarations of the same faul who does not know their own history. All this has no chance of integrating into the context of the environment that surrounded the Beatles until 66 and has prevailed to this day, which explains why the lie is still valid.

A premeditated death must have a motive, a cause. It’s a matter of thinking, who has the power to keep a lie for so many years. Faul alone could never have done it. He was only fortunate in having some resemblance to the victim, he was selected, his reward was adjudging property, money and fame of a deceased. And he keeps working for them.

The intellectual authors are those who have much to gain, and for them winning is not money, it is power. They have their plans and if some get in these, they eliminate them. The world is full of these examples.

The music industry is just one of the many ways they use to achieve their desires. They just have to find those who have the potential to serve their plans.

In those days the plan was to manipulate the youth, with music and drugs to instill ideologies.In this context the Beatles were found when they became famous and were targeted. First they would involve them in any way and make them try LSD. Three of them gave in and were caught, but not one of them. The result is PID. (Salvador Leopoldo Vanda Soler)

I was invited into the FB group “I Believe that Paul McCartney is Dead” and quickly withdrew last night after a brief exchange with SLVS. I presented my evidence that Paul McCartney is twins, bolstered by childhood photos that are (inexplicably) available for all to see to this day. The one to the left shows two boys, one standing, one partially seated, who would be the same height if both were in the same posture. We are told they are two years apart, not readily apparent. Note that they are dressed alike, and note also the parted hair on the one on the left. This hair part is a distinguishing feature between the two that was apparent well into adulthood.

Do take a gander at the childhood photos, still available to any of curious and independent mind. 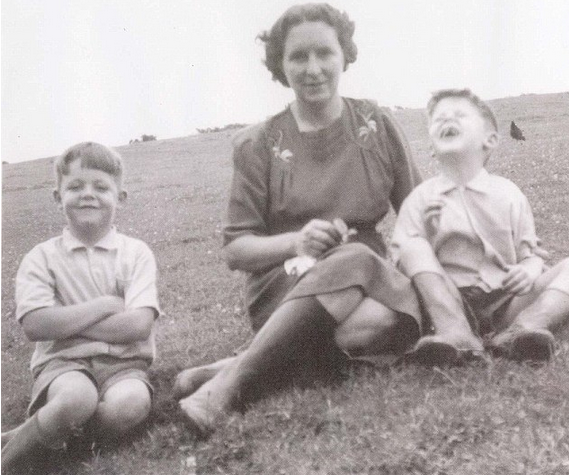 This photo in particular is useful because it so clearly shows that hair part again, more like a cowlick. It will be seen again and again as Mike McCartney (or whatever his real name) supplanted the original Paul in the public eye. Both were used interchangeably in the early years, but Mike, perhaps better looking and more talented, became the Paul we know today as Macca. The other receded to the background, briefly reappearing as John Halliday.

OK, that is as far as I go, as this is all old ground. I am completely satisfied that there was a set of twins who became Paul McCartney, and that the Paul Is Dead hoax was fashioned as a way to misdirect people away from that obvious conclusion. SVLS above will have nothing of it. When I suggested he go look at the photos, he answered “The photos are false.” The exchange wrapped up as follows:

SVLS is married to his theory. There can only be two reasons, in my view: One, he is emotionally invested in the sweet and ‘cute’ original Paul so that his supposed death tolls like a cathedral bell in his mind. He feels a sense of profound loss.

The other reason is that he is paid to advance the PID theory against all evidence, keeping the juggler’s balls in the air. Honestly, he doesn’t seem that well versed or skilled in argumentation. He comes off more as a fanboy. Review his words above, note how he says that the Beatles were “… found when they became famous and were targeted.” Thus do we see that SVLS imagines that they were a natural phenomenon that were derailed by higher powers and corrupted. The existence of a twin derails that idea, as it suggest advance scripting of their rise to fame. Acknowledgement of twins would be a painful loss for SVLS.

In separate discussion, offline, it was suggested to me that Lennon and McCartney happened on each other to form one of the most famous songwriting teams in history, two musical geniuses who by synergism brought out the best in each other. That is possible, of course, but then again, the theory is derailed by the existence of McCartney twins. Which one was the genius? Here I offered that

“The idea that two musical geniuses, neither of whom had musical training, sprung up and happened to bump into one another is far-fetched, the odds against it immense. Think of all of the sand on all of the beaches of [California]. Think of one grain of sand. That STILL does not accurately measure those odds.”

Maybe that is not so profound that it deserves a quote box, but I stand by the improbability of the Beatles being a natural phenomenon. The existence of McCartney twins disrupts all of the evidence so painstakingly assembled over the years by fans and zealots. I derive from the simple fact of twins that the Beatles were a scripted phenomenon, that their musical talent was far overstated, that they did not write their own music or play their own instruments in-studio, and that to this very day the McCartney we know as Macca is a well-trained fraud.

After all, the existence of twins points at premeditation, planning. The gentleman with whom I had this exchange is a nice fellow and has an interesting theory that the Beatles were formed of more than one group of twins, four complete sets actually. From that the world saw two groups that were carefully kept out of the public eye at the same time and used to flood the media with appearances and at the same time allowed down time.

It’s maybe far-fetched, but I came away from my work with Stu Sutcliffe and John Lennon with the lingering impression that each of them was a set of twins. Then I quit. I felt like SLVS above, a fanboy of the group even as I had come to detest them.

The question left unasked is why the boys were carted off to Hamburg, Germany, for training to be Beatles. Was it done to keep them out of sight during the audition/selection phase of assembly of the group? Was one of the qualifications for audition twinhood? Far-fetched as it seems, it is intriguing. I hope my new-found acquaintance keeps at it, keeps plugging away.

Here I am writing about them again.

PS: It only gets better. Here is an article from one of the PID sites that admits that McCartney is a twin, using the same photos I have used here, and also that Mike McGear is not a McCartney. It then goes on to claim that nonetheless, Paul still died in 1966! They are doing everything in their power to keep the psyop alive, even incorporating my work here. (I say “my” knowing that MM also wrote on this matter – he used my work and expanded on it with his own ideas and information, and did a  good job with it. I steal no credit from him.)