The above image, Patrick Ireland being rescued by two SWAT Team members, is iconic. Ireland was hit by a shotgun blast, and suffered injuries to his head and foot. He was said to have lain unconscious for over two hours after his injury. Keep in mind that Dylan Klebold and Eric Harris had commenced their rampage at 11:19, and committed suicide within a few feet of Ireland at 12:08. Spook numbers book-ended the Columbine Massacre. (Photo credit: ABC News.)

Ireland is an actor, and one of several who are engaged in “lifetime” roles. He is called on now and then to recount the tragedy for various anniversaries and flashbacks recalling other fake events. He’s a handsome man, and fortunately bears no visible scars from the incident. It is also interesting to note, that while Ireland is said to have been shot “in the head and foot,” the boy making the dramatic exit through the window has been shot in the shoulder. The feet are not visible.

The initial action in this massacre took place at the west exit of the school. Rather than a controlled evacuation it seemed there was pandemonium. Munson, who had become a student at Columbine just four months earlier, was running down the north hallway towards the east exit when shot in the ankle, as not seen above. She made her way out and was assisted by friends. Although all bear anguished faces, Stephanie shows no sign of a wound, and none in the group exhibit any tears. (Photo credit: Kevin Higley, AP Images.)

Here’s a diagram of the school, upper level:

The red arrow points towards the area where the initial shootings took place. The purple area is where Munson endured her fake wound. It is almost as if planners are trying to cover the exits. Another actor who was faked-wounded and survived, Sean Graves, would manage to crawl to the west cafeteria door (on the lower level and not shown in this diagram), which would have been the most logical escape when Dave Sanders exhorted all the students in the cafeteria to run away. Another exit was covered.

I have been struggling with the narrative of events of that day. I have, stored away in drafts, a blow-by-blow. It is tedious, and takes up too much time and space. Such descriptions are available at Wikipedia, from  Jefferson County Sheriff, and other sources. Do I want to drag readers through it? I have decided not to do that. These trusted sources are all lying. My task here is not to repeat the lies, but rather expose them, as with the iconic photos above, neither of which match the narrative.

The Columbine Massacre, as time goes on, is becoming easier to understand, though people may scoff at the scale of the event and the number or liars and actors required. It can be broken down into three segments:

Absent throughout is an important element: A coordinated and effective police response.

Remember that the original plan called for a massive explosion in the cafeteria, which never happened. It would have been caused by bombs planted by Klebold and Harris – coincidentally just when the custodian had turned off the cameras. It is apparent from Segment Three that no bombs were planted, and that a small gasoline fire was started and quickly extinguished. This exhibit was staged in the cafeteria, the only place at that time said to have cameras. All of the shootings outside the cafeteria are off-camera. So famous shots of Harris and Klebold in the cafeteria were probably deemed necessary to the plot, otherwise we would never be able to place the boys in the building. That’s why they shot that scene. If it seemed contrived, it is because it was.

The actors in the outside shootings were:

That is eight victims. Consult any one of the official narratives for the details. The script called for Klebold and Harris to merely begin random firing after their bombs failed to explode. I have found at this time no visual evidence of outside shootings. It was all done by means of the testimony of of victims and witnesses.

Time Out: Two things to take note of here:

Directly west of that same scene is a soccer field. Between the school and the soccer field is a grassy knoll. I have struggled for the appropriate joke here. I got nuthin’. It is all too easy, too obvious. Please insert your own jokes in the comments, and I’ll give an award to the best one. Allusions to Abraham Zapruder, a picket fence, a puff of smoke, students running towards it … don’t go there. We are looking for original and funny, and as I said, I got nuthin’. I cannot help but think, however, as they show us photos of Stephanie Munson above, showing no sign of injury, and Patrick Ireland with injuries in the wrong place, and now a grassy knoll, that they are taunting us.

2. At no time in the narrative does anyone offer any resistance as Klebold and Harris wander through the school randomly shooting people and objects. It might be easy to judge here, of course, as none of us knows how we would react. But I am thinking of a famous quote attributed to Mark Twain:

“It is curious that physical courage be so common in the world, and moral courage so rare.”

Columbine was a script written by Intelligence in consultation with behavioral psychologists and designed to push appropriate buttons. While many people would indeed cower in fear and tremble hoping for random fate to pass them by, there are among us people of a different mold. They are with us now and have been throughout recorded time. These are the ones who ignore fear and physical pain: Our athletes and soldiers.

We all know them – they are not the brightest among us, as evidenced by any sports interview ever done. We need them, however, and they easily take on protective roles, becoming police, firefighters, and joining the military. We honor them at every sporting event, parade, and on every holiday. On April 20, 1999, they were hiding under tables.

It is just a movie script, I realize, and at the same time wonder if it was not deliberate. Since so many more school shootings were in planning stages, perhaps the writers and psychologists were subtly insinuating cowardice in us, showing courage and strength to be nonexistent in the general population. Had this massacre really happened at some point, and early on, either Klebold or Harris would have been taken down by a blind side hit,  or be struck by an object like a chair or book or had a bookcase toppled on top of them. But the only resistance that I encountered in this whole stage play was one of the students hiding under tables in the library meekly pushing a chair towards the shooters. That’s disgraceful. That is how they wrote us.

Not only do the writers of this fake massacre have no respect for our intelligence, they also don’t think much of our character and courage.

Reviewing the layout of the school, most of the action takes place on the west side of the building, in particular in the library and outside the west entrance. The cafeteria is used to show a mass panic exit and to showcase Harris and Klebold trying to set off a fake bomb. But between the initial fake shootings outside the west entrance and the library, massacre, we had other actors and fake casualties.

This all took place on the upper floor:

The red Arrow is the west entrance, site of the supposed outside shootings. The yellow arrow is library. Directly beneath it is the cafeteria, and a somewhat circular staircase (black arrow) joins the two floors. Blue arrow is the east entrance, and the green arrow is the north hallway.

Prior to entering the school, Klebold and Harris had shot at the doorway of the west entrance, injuring art teacher/hall monitor Patti Nielson and student Bryan Anderson – glass shard and wood splinter wounds. Nielson will retreat to the library, as she has been called on to bookend the events inside the building. She will make the initial 911 call, and later report the death of the boys. That was her role.

After that and before entering the school, the boys exchanged fire with a policeman, Jefferson County Sheriff Deputy Neil Gardner, who has to be considered one of the actors. Neither he nor the boys can shoot for shit. At 11:24 Klebold and Harris entered the school through the west entrance.

Once inside, shots are fired at the east entrance. Harris shoots down the hallway outside the library. Some students make a break for the east entrance, and at this time Stephanie Munson receives her fake ankle injury, which leads to the fake iconic photo. Klebold makes his presence known in the north hallway, and continues shooting. He then runs towards the library hallway, apparently passing Harris on the way.

Harris and Klebold are standing at the top of the library hallway just as Dave Sanders turns the corner from the south hallway by the stairway to the library hallway. Sanders is shot. This is four minutes after Sanders boldly told the kids in the cafeteria to “run away!”, apparently the only evacuation protocol in use for Columbine High School. It seems odd, given the short staircase, that it took four minutes for Sanders to negotiate it. I think we have a continuity error here. 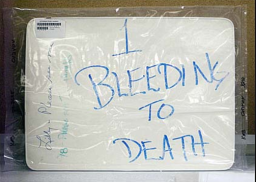 Klebold and Harris hover around the library hallway, and Sanders is dragged to Science room 3 by a teacher. He will bleed to death in the coming hours, leading to yet another iconic photo, “1 bleeding to death.” (Keep in mind that without the iconic images, we on the outside have no clue of what is going on inside. It is as if the writers realized that they did not have much of a show without dramatic images depicting the unseen carnage inside.)

Up next: The Library Massacre and suicides

33 thoughts on “Columbine: Not a tear was shed for the victims (Part four)”