How did they pull it off? 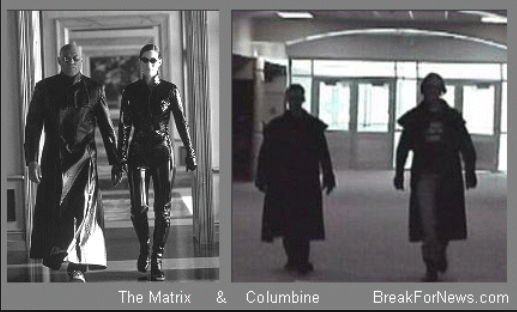 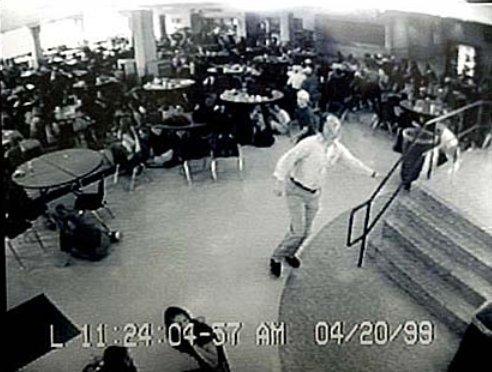 I know that is hard to make out, but assume just for sake of argument that I am right, that this is a man wearing a mask. What to make of it?

Now let’s go back to the yearbook photos: 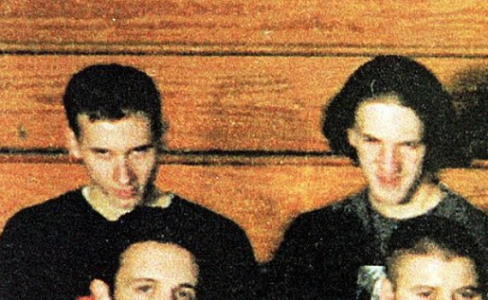 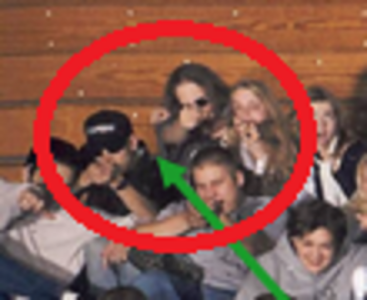 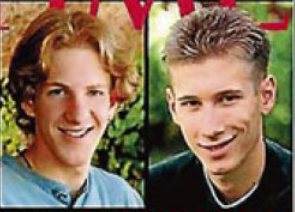 I am mostly struck by the pitch-black hair on Klebold in that photo, as he is a redhead in this graduation photo. Harris too has much lighter hair in the photos immediately above. What is going on here? There is certainly a strong resemblance … did they dye their hair? Or were their faces pasted on other heads?

I will try to tie all of this together:

There were no students at Columbine by the name of Eric Harris and Dylan Klebold. There were photos in the yearbook, but since this event was long in planning, those photos were either pasted in, as shown above, or were real photos of two older Colorado men who would later go on to be the creative force behind South Park, the Book of Mormon, and other productions. Or so we are told.

How can that be? It is a big school, 1,945 students in 1999. Kids form cliques, and probably know at most 50 other students. In a school that large, it is very easy to run ghost students. Every kid would assume afterward that Klebold and Harris were real (after all, their photos are in the yearbook) and ran in other crowds, or were just loners.

Shlief and Lomontagne (if that is even their real names) were acting, as was everyone else in Moore’s movie. The effect of that scene was to give testimony to Klebold and Harris being known students at Columbine and having classmates who remembered them. The class just happened to be at 6 a.m., and off-campus, and if such a class even was real, perhaps only a couple of students would enroll. My guess: There was no off-campus 6 a.m. bowling class. It was invented for the sake of Moore’s movie. (Harris is said to have had a friend, Brooks Brown, whom he warned to go home before the event. That story too serves to make Klebold and Harris look like real students. Brooks Brown is a player.)

The cafeteria evacuation scene was shot in advance, possibly during the preceding June, when the school is shut down. Extras were brought in to make the mass exodus, which is why they blurred the faces. Since Dave Sanders was not there, they had a man in a mask pretend to be him. (Sanders, an insider (age 47), might simply have been unavailable on the day they shot that scene.)

It is very easy to shoot video footage with fake dates on it. The camera does not know the date – it has to be manually entered. The cafeteria scenes for the entire day of 4/20/1999 were shot long in advance, as I see this shaking out.

Two actors were brought in at some time before that day to play Klebold and Harris, and they had two jobs: One, the cafeteria scene, deliberately blurry so we cannot really make them out, and the death scene where, again, Harris’s face is not visible. These same two actors performed in what were made out to be amateur movies and which included the one above where they are walking into Columbine wearing trench coats.

There was some staging, some noise-making, but since the FBI took over the scene in the “aftermath,” it was all under spook management, and no outsiders ever saw any bodies of wounded or dead people. It was a TV show. It was coordinated with news, which flew helicopters overhead, and hospitals, who pretended to care for the wounded. SWAT teams marched around looking busy, but we have no photos of any such people inside the building. Four of them, Dan Delmonica, Robert Broden, Ron Fox and Tom McKibben, were in on it and later were used to offer witness testimony in the various documentaries made about the day. They are either actors or real SWAT team members with inside juice, probably ex-military.

This event was years in planning, so that actual actors, the kids who fake died and were fake wounded, were moved into the town, and many actually attended Columbine in preparation for the day of the massacre. Isaiah Shoels, the only black victim, was not one of them. He is a ghost.

There was an objection to my statement in Segment Six that Trey Parker was Dylan Klebold and Matt Stone Eric Harris. Here are the birth dates of the four:

(No doubt commenters will have fun with those dates. I find Harris and Klebold’s birth dates to be very spooky indeed.)

That is too much difference in age for Stone and Parker to have played Harris and Klebold. And they did not, but spooks did use their photos for the yearbooks during that time. Parker and Stone, after all, are actors. They are also insiders, otherwise they would not have the platform they do in the entertainment industry.

Here is our writer Tyrone McCloskey on the pair:

“Parker and Stone were said to have attended college in Colorado and studied film under Avant-garde filmmaker Stan Brakhage, the namesake of the South Park character, Stan Marsh- I caution that those two may in fact be theater people, trained in the various theatrical arts they have had great success with- BUT, that does not mean they aren’t spooks of the first order- It’s well agreed that no one gets a platform the size of Parker and Stone’s without the right connections and agenda driven content- There are many ways to contextualize characters like these to ultimately smother them in red cloth-

First, Brakhage as their mentor: Brakhage was born in 1933 (Ca-ching!) He commiserated with a host of modernist spooks in the late forties/early fifties as the CIA made their big push to destroy traditional art and its political potential- Brakhage I would describe as the Jackson Pollack of film- Like Clement Greenberg, the champion of abstract expressionism (an admitted CIA project) Brakhage et al had their press champion in Jonas Mekas who explained at great length in CIA co-opted journals what a great talent these spook artists were to a befuddled public who just didn’t get it- Fake awards soon pushed this ultimately Warhol/Sutcliffe inspired anti-cinema to illegitimate scholarly status (Spoiler alert: All of Brakhage’s films are utterly unwatchable, no matter the attendant superlatives)

Brakhage had earlier mentored another CIA sanctioned degenerate “filmmaker”, Kenneth Anger, he a Doonsebury-like connector of the many nodes of Manson-era Laurel Canyon- (It’s possible Kenny, the character on SP that dies every week, is named after Anger (Kenneth Wilbur Anglemyer)

As I argued in JFKTV, these blockbuster psy-operas require serious show biz vets to pull these things together and keep track of the parallel narratives that are engineered to divide the public and simultaneously have the public agree that the hijackings/shootings/suicides actually did take place-

Given the overlay of teenage angst that the Columbine narrative fetishized, I would not be surprised to find that asset Brakhage recommended two of his former pupils to infuse the narrative with up to date memes and imagery that the two much younger protégé’s would be familiar with- The additionally perverse touch of Parker and Stone using their own photos from a decade or so before is perfectly consistent with the brand of sick humor South Park is infamous for-

I’ll also bet half a day’s pay that Columbine was infiltrated with “transfers” who could pass for seniors to get a lay of the land- A beta test of sorts for such a maneuver was concocted by Rolling Stone magazine in the early 80’s when they sent Cameron Crowe, a featherweight writer/director who was just starting out as a “reporter”, to return to his alma mater after college and pose as a high school senior, thanks to his still boyish good looks, and then write an article on what life was like from the inside of a teenage hive like a white suburban high school- A subsequent book, “Fast Times at Ridgemont High” and a film version launched Crowe to commercial success- If there was an overall producer/director of Columbine, Crowe would be one of my prime suspects, with input from another cinema knave who made his own film about Columbine, Gus Van Sant-“

It is my contention that the images of Parker and Stone were used as Klebold and Stone – it would be ideal. They could then have invented families, invented backgrounds, and real photos to convince us they are real. Since actual photos of real insiders were used, they kept it in the family. There was no chance ever that the real people in those photos, who are known now as Parker and Stone, will ever talk.

Here are some facial comparisons: 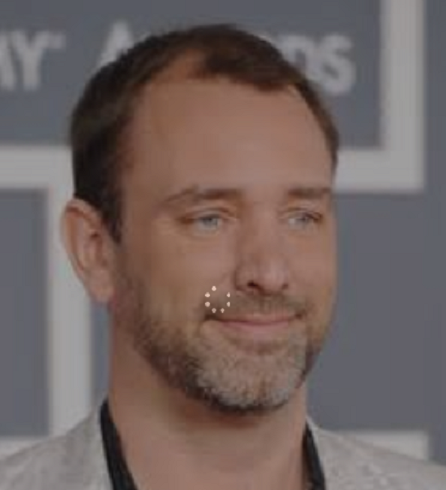 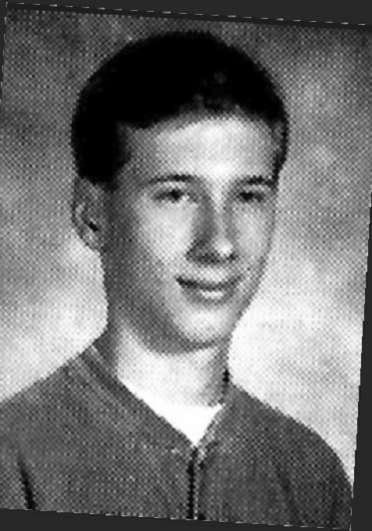 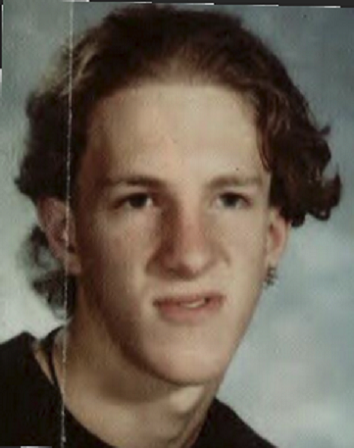 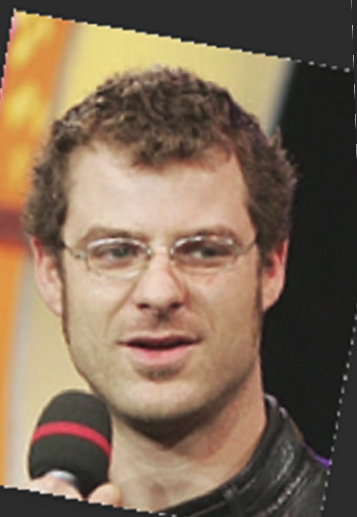 Note the photo of “Klebold” above is taken from a yearbook, and the head has been superimposed on another body, which is why it looks awkward. Here is the full image: 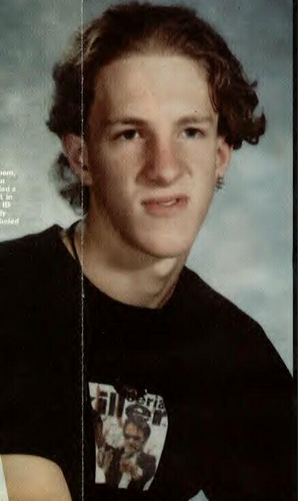 How subtle to put him in a t-shirt with the word “killer” on it. That could be a joke, I suppose, some after-the-fact monkey business, but it is advertised as a class photo.

I realize that the above photo comparisons, due to the span of time between them, will not be totally convincing. I could work it more, but am so tired of Columbine, and in the end it doesn’t really matter if the Klebold/Harris-Stone/Parker connection is there. The overarching point is this: Whoever those two boys were in the cafeteria and in the death shot are, they did not die that day, and they did not kill anyone. I say that photos of Stone and Parker were used to keep it in the family, and for no other reason. On April 20, 1999 Stone and Parker could have been anywhere in the world. They were not at Columbine.

I started this Columbine journey out wanting to know how they pulled it off, and it has only been over the last couple of days that I came to realize that Parker and Stone, whatever their real names, merely lent their images to the event, and that everyone in that school that day after the real evacuation was an actor. The cafeteria scenes were shot long before, as was the death shot. everything else was a TV show, perhaps a rehearsal for another TV show set for 510 days away, September 11, 2001.

I know people are going to wonder what became of the “dead” … I do too. The wounded could return to school, or transfer out. Richard Castaldo and Anne Marie Hochhalter were both said to have been paralyzed that day. Did they carry forward as paralyzed people? The Denver Post indicates that Castaldo returned to Columbine in a wheel chair. That might have been seen as necessary to sell the event as real. Ann Marie’s mother committed suicide later on. Was that real, or staged? Did she want no part of the gig?

I only know this: At Columbine High School on April 20 (110th day of the year), 1999, no one died, no one was wounded, and not one real tear was shed by any victim or onlooker.

29 thoughts on “Columbine: Not a tear was shed for victims (Conclusion)”