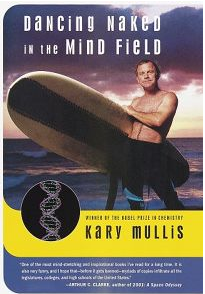 I am currently reading a book by Kary Mullis, Dancing Naked in the Mind Field.  I like this Mullis character, as he is a little off-center. I imagine I could drive coast-to-coast with him and enjoy every minute, having to stop now and then so he could get out and run naked around a lake or through a car wash. That makes him interesting.

Mullis, if you recognize the name, invented (and won a Nobel Prize for) the “PCR,” or polymerase chain reaction machine. It takes a small strand of DNA and magnifies it, making it far easier to study. It is this machine, I am led to believe, that has made DNA matching possible. It is also currently being used to identify “COVID-19,” but was not designed for that purpose, and so often makes mistakes. However, I don’t imagine the testing being done for that virus is real, as I don’t imagine the virus is real.

Mullis wrote the introduction to Peter Duesberg’s Inventing the AIDS Virus. Duesberg is a scientist rather than a paid shill or propagandist, and is therefore shunned and ostracized in the scientific community. He and Mullis complained loudly back when the PCR was being used to identify the HIV retrovirus, first that the machine was not intended for that use, and secondly (and to this day) that there is no scientifically proven connection between HIV and AIDS. It, like COVID-19, was a fake pandemic.

Enough of that. I am currently on page 120 of the Dancing Naked book, and am stuck there. I keep going back and re-reading chapter 11, “What Happened to the Scientific Method?” Mullis starts out by introducing us to James Buchanan (1919-2013), who won the 1986 Nobel Prize in economics. The reward was for something simple, dividing the world into four groups: voters, politicians, bureaucrats and interest groups. Three of the four groups are organized professionals. Voters are not organized and don’t take much time to think about things, as they are busy. The other three groups have money (usually government-sourced), and need to justify their existence. They do so by identifying important problems that need to be solved.

COVID-19 is such a problem, invented by virologists and sold to politicians, who of course know nothing of science and are easily fooled. Others, such as pharmaceutical companies and fake entrepreneurs/philanthropists, are on board to make money, to change the way we think and live, and to enslave and impoverish us.

Mullis is said to have died last August at age 75 of pneumonia. I am suspicious about that. I posit another scenario where he was advised to get out of the way, as his invention was going to be used for a massive hoax. He either retired to Santa Catarina, or died for real by some mysterious cause. Pneumonia, the old person’s friend, only takes out the already unhealthy, and Mullis was not that.

Oh well, he’s gone. No matter dead or alive, when people like that are said to die, forgetting Elvis and John Lennon, we never see them again.

Here’s a small excerpt from the book, page 114:

One of those labs announces in a series of scientific papers that they have found some unexpected and very interesting phenomenon in the upper atmosphere that contradict the currently accepted theories of the radiogenic formation of carbon-14. This could have a dramatic impact on radioisotopic dating of fossils. The time frame for human evolution might be a 10th of what has previously been concluded. We may have evolved from fossils in the Olduvai Gorge in only a couple of hundred thousand years. All of biology may be younger than we think. More research would be required to confirm this. Biologists all over the world are curious and very excited. The lab is requesting $1 million from the National Science Foundation to conduct a more detailed study.

A second lab working on upper atmospheric physics calls a press conference to report preliminary data on what appears to be a giant hole in the ozone layer and warns reporters that if something isn’t done about it – including millions of dollars in grants to study it further – the world as we know it will be coming to a tragic end. Skin cancer is epidemic, and there are reports of sheep going blind from looking up to the sky. People are starting to worry about having sunglasses that shield their eyes from ultraviolet light. Children begin to learn about it in school, and they are taught to notice the intensity of the UV light when they get off the bus.

Which of these two laboratories will get funding? Follow the money trail from your pocket to the laboratories and notice that passes through politicians who need you and by the interest groups who with the media train you. James Buchanan noted 30  years ago [Dancing Naked book written in 1998] – and he is still correct – that, as a rule, there is no vested interest in seeing fair evaluation of a scientific issue.”

I have read in places that carbon dating is suspect, but with science as corrupt as it is in the postwar era, the only real and important work is being done on the fringes by people labeled pseudo and quack. Indeed there are people of that ilk around, but often enough the real quackery, as with COVID-19, is mightily financed and hyped. Says Mullis, “very little experimental verification has been done to support important societal issues in the closing years of this century.”

“Scientists who speak out strongly about future ecological disaster and promote the notion that humans are responsible for any changes going on. Turn off the TV. Read your elementary science textbooks. You need to know what they are up to. It’s every man for himself and as usual, you are on your own. Thank your lucky stars that they didn’t bother to change their clothes or their habits. They still where priestly white robes and they don’t do heavy labor. It makes them easier to spot.”

We are told now that the ozone layer problem has been solved. Good thing for us, even as it was never a problem.

“I couldn’t help but notice the amazing coincidence that the American patent on the production of Freon, the principal chlorofluorocarbon used in refrigerators and air conditioners, expired at just about the same time Freon was banned. Those countries that had begun producing Freon without paying for the privilege were asked to stop. And a new chemical compound, a commercial product that would be protected by patent, would soon be substituted to make a lot of money for the company that produced it.”

Says Mullis, “Scientists could be something to entertain us and invent nice things for us. They don’t have to be justifying their existence by scaring us out of our wits.”

But that is the world we live in. We are managed economically, intellectually, psychologically, and physically (as in staying home, wearing pointless masks and staying six feet apart). Scientists are now a bought priesthood. Our science, along with our medicine, are still in the dark ages. What little is being done is on the fringes by the usual suspects, people of high curiosity and no funding, working in their garages and basements.

14 thoughts on “Dancing naked at a formal ball”