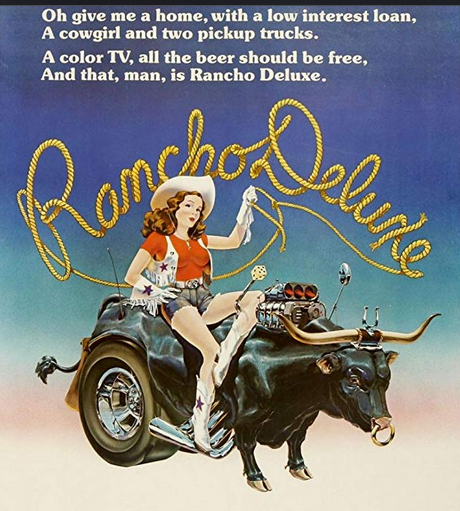 The above movie poster should be called “A Movie made in a place where I have actually been.” Rancho Deluxe was shot in the early 1970s near Livingston, Montana in a stretch of river bottom (not inappropriately) named Paradise Valley. If you recognize the name, it could be because Peter Fonda owned some land there, and Jane would come visit him. Anytime Jane goes to Smallville, it creates a stir. (Neither Jane nor Peter were in the movie.) Lots of movie stars passed through Paradise Valley, probably still do.

The reason I mention this easily forgotten movie is that I watched it some time after the year 2000, 25 years later, and waxed nostalgic. Scenes in the movie depicted people in clothing designed to keep them warm, and the mountain backdrops were snow-covered. Oh what it was like back in the day before Global Warming! As I watched those scenes I thought of my own journeys through that valley on our way to Yellowstone National Park. The place was usually windy, and snow did not last long on the valley floor. Though beautiful in a landscape sense, it is not always hospitable.*

My point is that the Global Warming meme, now called Climate Change, had worked its way into my brain, and was firmly in residence. Paradise Valley is now like it has always been, occasionally hot, often cold, always windy.

Dave McGowan (controlled opposition, fake death 11/22/2015) wrote a series called “Wagging the Moondoggie,” mentioning in part how easy it is to see through the Apollo hoax after even a brief review of the evidence. But still, people cling to it tenaciously.

Indeed. These liars, our climate “scientists,” are not just shamelessly lying, but are making the lies stick. And that is what is so impressive about AGW, Anthropogenic Global Warming, not that it is just a big hoax, but that they are reaching every brain resting on every set of shoulders, infecting them like worms.

I’ve done a lot of research on various topics, John Denver’s fake death, the fake Columbine massacre, AIDS, Jonestown … and I have to say it is fun and even rewarding. It is also hard work, starting out understanding very little, and then seeing things unfold before my eyes.

Columbine was by far the hardest, as it was a major hoax on a scale with Oklahoma City or Waco. We just drove by that school (by chance) yesterday, and police cars were all about, the parking lot overflowing as they relived the lies, probably even bringing in the fake ‘survivors,” lifetime actors. Earlier, as we left Barnes and Noble, I saw stacked by the door a book by a “survivor,” Kacey Ruegsegger Johnson, timed for release on the 20-year anniversary. When they tell lies, these hoaxers mean for the lies to stick.

At the center of the AIDS hoax is HIV – that is, AIDS is real, but small in terms of the population, a disease “acquired” by lifestyle – too much party usually. In order to scare everyone with it, they had to connect it to something benign, so they selected HIV, a harmless passenger virus that likely resides in all of us. That was the lie at the center of the AIDS matter, that any of us could get the disease – from each other. Even now Wikipedia will tell you that the disease and its cause are backed by “…conclusive medical and scientific evidence.” That’s just a big f****** lie, that’s all that is. But the people who know that it is a lie are few and have been forced into obscurity by money and power. That’s how “… media, and the scientific community, and the educational community, and all the other institutions we depend on to tell us the truth …” function. They all form a chorus and sing the same lie.

What surprises me about AGW is how easy it is to understand the lie … that CO2 is somehow dangerous. It is not. If there is any connection between it and warming, it is slight at best because any warming going on is slight at best. I wish that McGowan would come out of hiding and write about it, as he is a very good writer (or maybe just a front for a very good writing committee).

But why CO2? This part is a little bit frightening. Al Gore is a scripted act. He tells more lies than my first wife, and makes them stick. He centered on CO2 for a reason, and I suspect that reason is this: CO2 is a source of wealth, of food supply, of energy. If we cut back on CO2 use (forget about putting it in the atmosphere, inconsequential), we are going to have less wealth, less food, fewer people, and harder lives. Try driving your ugly windmill on a vacation.

Columbine was selected as a Freddy Krueger nightmare to make sure our kids grow up trembling.** As frightened adults, they will be easily herded. AIDS was used so that we would be less trusting of the other gender, and make fewer babies. CO2 is now used so that we devolve as a society, going backwards in time. That’s all I can make of it.

*There was once in Montana news a murmur about a civil engineering wet dream. As you leave Paradise Valley and drive into Livingston, even untrained eyes can see that a narrow slot there could easily be dammed, and the valley flooded so that we could have our own Montana Version of the Glen Canyon debacle. The Livingston Enterprise editor one time suggested to people in Billings who favored the scheme that such a dam be built on the Yellowstone below Billings, flooding the city but at least it not doing any noticeable damage.

**My grandson attends West Jefferson Middle School, which was closed last Wednesday as part of the Sol Pais hoax. One of the moronic blockheaded teachers in that school told his students that Sol had been seen driving past the school! How’s that for scaring the shit out of children?