I found this very interesting. It is the University of Alabama at Huntsville Satellite Temperature Record. (Website link.) The reason it only goes back to 1979 is that this is the limited time period during which the technology has been available. There’s also an explanation of how the data is collected and calibrated. The site is run by Dr. Roy Spencer and John Christy. As I read it, they currently show warming trends of +0.19 (land) and +0.08 (ocean) centigrade per decade.

Just laying a ruler on this graph and what I perceive to be the temperature increase from 1979 to 2018, I am seeing about .5 degree centigrade temperature increase during that period. That is hardly alarming. Note that 1997-98 and 2016-17 had El Nino events, causing the spikes in the graph. Also note that we quickly return to the norm on the graph after those events.

Contrast that with this graph, the same data from above along with weather balloon data: 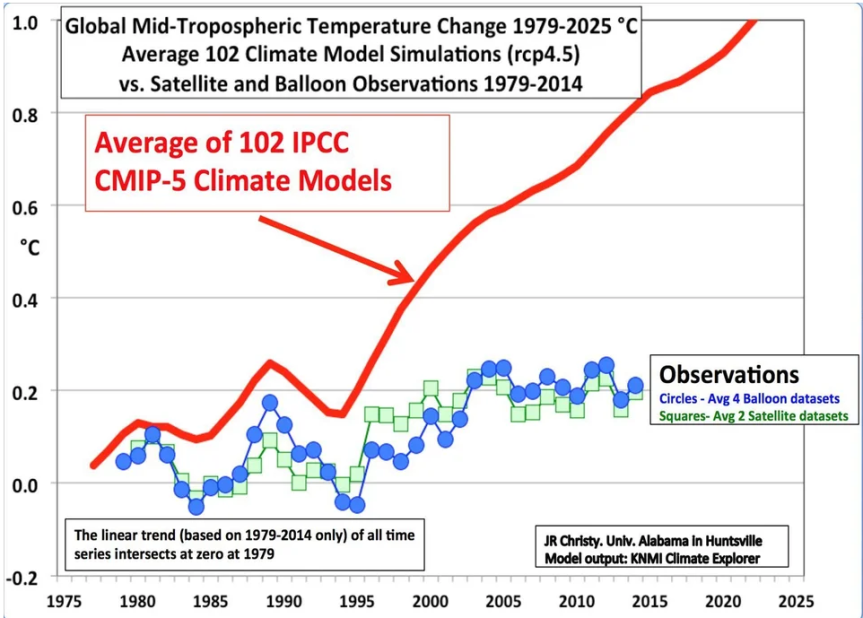 As I am given to understand, the Intergovernmental Panel on Climate Change (IPCC) runs models by 32 countries, so there must be sets and subsets to get to 102. All of them except one (Russia) wildly exaggerate warming trends. The lines diverged around 1998, a period when warming stopped. This is referred to by Chicken Littles as a “pause” or “hiatus” in warming, meaning that they are not done forecasting the end of life as we know it on this planet. I think they are in denial.

A few days ago AB at Fakeologist ran this video:

I really did not know what I was watching, but it slowly began to weigh heavy into doom and gloom. At the very end we are warned that we only have 12 years to SAVE THE PLANET. This is what happens when you combine corrupted science with uninformed star power … I hope to be around in 12 years, relaxed, reading about how fossil fuels created all the wealth we enjoy, about how CO2 is our friend (as I sip Canadian wine).

All of this hand wringing must cease! It has to be harmful, not just to the psyche, but to the hands as well. I mean, look at what happens! But if not this, something else. Remember Rachel Carson’s Silent Spring?  Never happened. Polar bear numbers are up, by the way. The polar ice cap is bigger now than when Al Gore forecast in 2007 that they would be gone by 2014.

There is a much more serious agenda behind climate change, which I intend to write about as soon as I find the right words … some in higher circles tend to be quite blunt about it. Yes, they say, the climate scientists are exaggerating, but they are doing so with massive funding. If they don’t, they lose the funding. But there is more at stake than money. It is about returning us to a simpler time when we had less money, less time, and fewer machines. CO2 is an engine for wealth and comfort. That is what must end.