This post is a re-visit as I promised commenter Graemebird a while back. The subject in question is TV host Bill O’Reilly, and my contention is that he is a zombie, and once went by the name Bobby Fuller, whose only lasting hit was a song called “I fought the law.”

END_OF_DOCUMENT_TOKEN_TO_BE_REPLACED

On July 25, 1969, Manson family members Bobby Beausoleil, Susan Atkins, and Mary Brunner paid Gary [Hinman] a visit. Manson was under the impression that Hinman had money in stocks and bonds, and that Gary had owned his house and cars. He sent the group to Hinman’s house to convince Gary to join the family, which included turning over his assets. According to Beausoleil, the group visited Hinman because Gary had sold him some bad mescaline and Bobby wanted his money back. Whatever the motive was, the conflict lasted 3 days. During which, Charles Manson and Bruce Davis stopped by. As soon as he arrived, Manson raised a sword and quickly struck Hinman in the head, slicing Gary’s left ear and face. Hinman asked Manson why they were doing this and requested him to take the others and leave. Manson and Davis immediately left in one of Hinman’s cars while the others stayed behind. Mary and Susan stitched up his ear with dental floss while Gary, who didn’t believe in violence, just kept on asking them to leave. It all ended on the 27th when Beausoleil finally killed Hinman, stabbing him in the chest twice. Bobby, Susan, and Mary took turns holding a pillow over his face. Beausoleil then wrote “POLITICAL PIGGY” and drew a pawn print on the wall in Hinman’s blood in an attempt to make authorities think the Black Panthers committed the murder. Gary died on the floor with his prayer beads in hand, chanting “Nam Myo Ho Renge Kyo Nam Myo Ho Renge Kyo”, the chant of his faith. (CieloDrive.com)

That’s not even good fiction. The writers’ object was to create a sword-wielding monster of incalculable evil who strikes out randomly at innocent people, and a murderer who stabs with a knife while his lady friends hold a pillow over the man … Hinman a man of peace and love and chanting a Buddhist prayer. There’s also a biblical reference with the ear cut off.  Oversell … much?

The Charles Manson character was an creation of Intelligence, in real life a harmless puppy hired to play a role. He only sold it with the help of a compliant news media that dutifully transmitted the caricature of a wild-eyed sword-wielding monster as “news.” Because it was news, because it was on TV, it was guaranteed that a gullible American public would swallow whole. I was part of that public.

Manson could only be seen, but not heard. If the public got to know him too well, they would easily see through him. He was an actor, and a musician, and a loser. His name was not “Manson,” his persona was an invention, his “family” mere hired hands who moved on to new assignments when the Manson gig was over.

By the way, Gary Hinman did not die that day, or any other day. In going through the names and faces of the Laurel Canyon zombies (walking dead), the name “Maury Povich” had been thrown out as a possibly as one of the re-purposed personas. I had heard of him, and one night while going through photos, I saw Povich, and knew I had seen him before. This was an easy one, as was Brandon DeWilde/Thom Hartmann and Bobby Fuller/Bill O’Reilly, as each man had struck the same pose, then and now, making a side-by-side comparison easy. 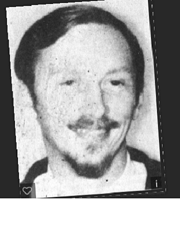 There is, to my knowledge, only one photo of Gary Hinman in existence, but it is a good one. All too often when doing facial comparisons, I find different poses among candidates, so that comparisons are fraught with difficulties. But something else sometimes occurs – people tend to strike the same poses for cameras throughout their lives. In my own case, I had a photo from 1982 or so, and another from 2014, and I marveled at how my expression was identical in the two. (Check it out here.) So too with Hartmann, Bill O’Reilly, Barbara Walters, Christa McAuliffe, Matt Stone and Trey Parker and Sharon Tate and all of the other phonies we have exposed here. They tend to pose for the camera in the same manner then, and now. 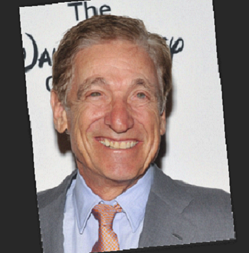 So too with Hinman, now known as Maury Povich. I didn’t even have to earn my pay on this one. Same angle, same crooked smile, same droopy and dark eyes. Also notice the line from his left ear to his chin, identical on both.

If you, like me, don’t know much about Maury Povich or his work, he has been all over daytime TV these past decades, from A Current Affair to The Maury Povich Show to Weekends with Maury and Connie. “Connie” is Connie Chung, his wife, who went public with her struggles to get pregnant, with Maury at the wheel. Talk about public lives! (They finally adopted.)

Before I forget, here is the comparison that convinced me the Gary lives:

MH and I discussed this, after it was becoming apparent what was going on with the Laurel Canyon zombies. Bobby Fuller/Bill O’Reilly became a FOX News pundit, and agitates the right wing crowd (including my late mom and dad) from that platform. Brandon DeWilde/Thom Hartmann took a radio slot to work with the liberals among us, his primary thrust to keep them in the Democratic Party. He works closely with Bernie Sanders. Phil Hartman/Glenn Beck, known to emote and shed tears on TV as a good actor can do, also works the right wing. Bill Hicks/Alex Jones works the conspiracy buffs, the ones who need misguidance. Pamela Courson/Barbara Walters worked the female daytime TV set, filling their heads with nonsense about party squabbles and fake issues. We have learned to look among the lightweights of journalism for our zombies.

Where does Maury fit in? He has had a platform on daytime TV at his disposal. Daytime TV is a low information mecca. What we have learned is that these actors, these CIA plants, are there to cajole and entertain those who think less and need mere distraction. It’s a full time job to keep people in that low information state, and yet have them imagine they know stuff.

There are others, more serious citizens and academics, who often read and think harder and look a little deeper than the O’Reilly/Walters/Hartmann/Povich set. In a full spectrum thought control environment, CIA is there too, providing the analysts, experts … the Chomsky’s, the Krugman’s, Drudge’s and yes, even Moyers and Sagan’s and Hawking’s** … no matter where we turn, spooks are there to greet us. It appears that the lower-level spooks who worked Laurel Canyon in the 60s were reassigned to mind the mindless TV masses. It’s low-level work, but pays well.

But it goes much deeper. Maury Povich moved to the Flathead Valley in Montana, Kalispell the nearest city. It is a beautiful area, mostly a vacation mecca but swarming as well with California immigrants. It could be just a place for Hinman/Povich to live out his days, but in 2007 he founded the Flathead Beacon, a local newspaper. It is disturbing to realize how deep down into the bowels of society CIA control of news goes, even to a lowly rag in a backwater area of Montana. Nothing is exempt.

William Colby, former head of the CIA, was quoted by Dave McGowan as saying that “The CIA owns everyone of significance in the major media.” Since that statement has been formally “debunked,”there is a good chance it is accurate. I never knew  what the word “owns” meant. I assumed it was some sort of contractual arrangement where someone like Anderson Cooper, a known CIA mole*, is told what to cover and what to emphasize. I never realized, as with O’Reilly, Hartmann, Beck, Walters, Jones, and as we will cover in the near future, Tom Brokaw, that CIA doesn’t just “own” these people. It gives them their name, personality, bio, platform, and marching orders. They are not just working for intelligence, they are its creations.

It is one thing to know that news lies to us all day every day. It is another to realize that the liars are not even real people. They are zombies.

_________________
*If he is known, is he really a mole? It is public knowledge that Cooper, son of Gloria Vanderbilt, underwent CIA training while attending Yale. I would simply call him a CIA “employee.”
** Stephen Hawking, a fake, the real man long since dead, is a product of British Intelligence, but the overlap among intelligence agencies world wide is so encompassing that I regard them all as the same agency.