All that follows is but my opinion based on photographic, video and written evidence that has accumulated over the years.

Below the fold is a 1:31 video that could be described as the “making of the Famous Photo, that of Phan Thị Kim Phúc running down a road after a napalm attack on her village. Please be advised that both the photograph and video are of a naked child. This is uncomfortable for all of us, but it is such a well-known photo that we feel at ease in running it here with a mere warning. If that troubles you, please read no further.

The photo is fake. But what is most interesting is that Kim Phúc is still busy today describing her wounds and suffering. She was a hired actress that day, part of a large production that put together the photo. She and photographer Nick Ut, who in my opinion did not shoot the photo (since it appears to be paste-up), are still on the CIA payroll talking about the non-events of that day.

I have watched Phan Thị Kim Phúc now in several productions, including a long interview with Jane Pauley on CBS Sunday Morning. Pauley, if she has any journalistic creds at all, is going to want to see the wounds.  (Unless she’s an actress too.) Instead, she does what all American journalists on assignment do – follows the script. There is no rigorous questioning, no incredulity about the possibility of survival of a napalm attack. Instead, Kim Phúc is allowed to tell her story without challenge, basic Propaganda 101.

I have seen quite a few photos of the wounds, some shown below: 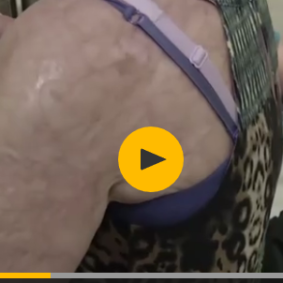 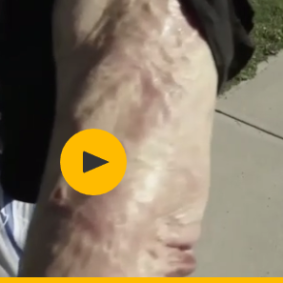 Lower left looks like a man’s arm. But set that aside – in none of these photos do we see her face. That’s a basic studio trick, power of suggestion, to assume that since we are talking with Kim Phúc, photos shown will be of Kim Phúc. I am not convinced.

The arm, the same one supposedly shown in the photos above, looks quite normal to me.

Here is Kim Phúc in the opening video above, the “making of” video:

Notice how the outer layer of prosthetic skin is peeling off, revealing not a bloody second skin layer as we see when we scrape ourselves, but normal skin underneath.

This leaves me to deal with one troubling photo, where Kim Phúc’s face and back are both shown at once:

I took this photo to Photoshop to monkey with contrast, as the line across the neck appears to me to be an effect to hide pasting of her head atop another body. I applied the same effects to the entire photo, and not just parts of it. Here is what I got: 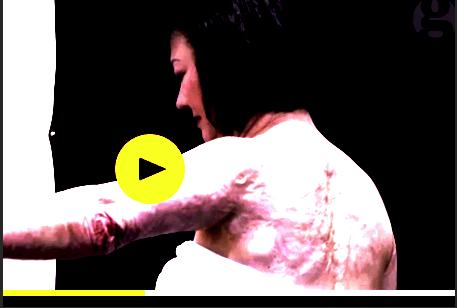 I raised the contrast on this photo, and look what happened – her back lit up, but not her head. Each is subject to different lighting. I can think of no reason for such odd lighting that highlights her back and excludes her head other than … the back and the head are a blending of two separate photographs. In fact, what we see is the line where they pasted her head on someone else’s body.

If is my studied opinion that Phan Thi Kim Phúc is an actress on long-term assignment. The Famous Photo was seen to have above-average propaganda value, and so became a lifetime assignment for her. She was not burned that day, and is not scarred now.

So let’s go back and examine the original Famous Photo:

We have five children and seven soldiers. We can see from the ‘making of’ video above, that a large crew was on duty, so we most likely have several shots of the kids running down the highway, or numerous ‘takes.’Notice how even though one child in the photo is in obvious and horrible pain and agony, no soldier is even looking her way. It may be that soldiers become war-weary and lose empathy, but all seven? It seems unlikely. It is possible that this photo was shot with the soldiers in it, the children added later in the Langley dark room. That is my guess.

We can see soldiers wandering around in one of the shots:

They are, however, heading towards the supposed napalm incident, and not away as shown in the Famous Photo. The kids are headed away. These are, I gather, the soldiers seen in the photo, but I cannot be certain.  They are too far away from the kids to have been used in the photo, but no other soldiers are apparent in the video except those holding cameras.

It is wet and overcast that day, so that while we occasionally catch a reflection on water, as seen above, there are no shadows cast. None of the soldiers or kids in the Famous Photo cast a shadow or reflection. It is the perfect setting for their task that day – to get good photos of the participants for later pasting onto the backdrop photo taken by the soldier at .37 in the video. Shadows can make photo fakery a very difficult task.

The entire Famous Photo is, in my opinion, a paste-up, a complete fake.

Regular propaganda is patient, and is applied steadily over years, decades, generations. Agitprop wants immediate results. It appears the Langley wanted a stirred up population at home,  and they wanted it now.

One final note: President Nixon commented to H.R.Haldeman, “I’m wondering if that was fixed” after seeing the photograph.