Note to readers: After receiving the video from Kevin* today of Barbara Walters’ first appearance on the Today Show in the 1960s, I slowly came to realize I had much of that scam wrong. While Pamela Courson did indeed become Walters, in my view, what I thought were surviving photos of the original Walters were in fact, again, Courson.

*To be clear, though Kevin supplied the video, he does not see what I see in it, and is not on board with my conclusions.

So I have more work to do – it appears at this writing that the entire Internet has been scrubbed of photos of the original Walters, but that is the work that now lies ahead of me – to see if any survived. Just as an example, the photo to the left here, which I took to be the original Walters, is actually Pam Courson in a 60s wig and done in black and white. It was said to have been shot in 1960, but more like 1976. She will end up looking like the Walters we all know, shown on the right. 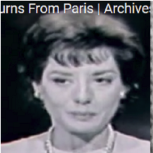 And, from Kevin’s video on the right here is the original Barbara Walters. Those with trained eyes should easily see that she looks nothing like the woman pictured above, and my work ahead will be to see if she looks anything at all like the Walters we came to know in the 80s and 90s. I doubt it. This is the woman who disappeared from view in 1976.

This post will reappear in a couple of days after I have worked over all the available old photos of Walters to see if any of them are of her, or a cleverly disguised Courson. This project, replacement of Barbara Walters with Pam Courson, was much deeper into our psyches than I imagined, the work that went on to sell Courson as Walters extensive.

In the meantime, there are some comments below the original post to the effect that last night’s Minnesota-New Orleans game was a fix. This is an old topic, long discussed here. There are three schools – that the games are real, that some of them are fixed – the more important ones (my view), and that all of them are fixed. Discuss away.