I reacted in a negative way yesterday to comments from some sources that were dismissive of my findings regarding Pamela Courson and Barbara Walters. I thought about it in advance, that is, I did not just let them have it, but wanted to discourage them from what they were doing, becoming instant experts at photo analysis. I put somewhere between 15-20 hours into the project (I don’t keep track, in fact, lose track of time), and behind that is thousands of hours these past years doing similar work. For someone to skim the article, pick out an apparent defect, and dismiss the entire body of work is, to say the least, annoying. So I answered them in firm terms, as a warning.

That said, I do not imagine for a second that I am not capable of taking flights of fancy, being subject to confirmation bias, or reading too much into what is before my eyes. I’ll never forget that moment, using Photoshop overlays, that I first realized that Jennifer Aniston is in fact not a set of twins, and that all of the face chopping had produced bad results. My heart sank to my shoes, and a long period of clean-up followed. That was a flight of fancy. Bad technology produced quite a few of those.

I have, however, developed a good sense of photo trickery – last night, watching Jeopardy, the image below flashed on the screen as Alex read the clue, and I said out loud to my wife “That’s a fake!” I  rewound, froze the TV and took a photo, seen below. What do you think? 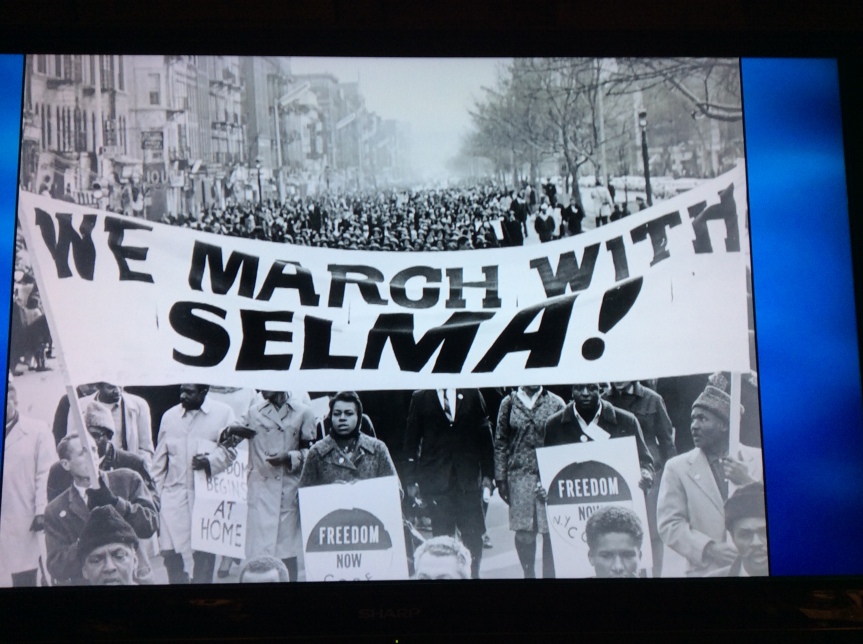 This post is not to discuss that photo, though I have to wonder why, if the Selma march was real, the photo is fake. I have a larger purpose in mind.

It is this: When we do our work here, we are human and capable of error. But we all of backgrounds in this stuff – Tyrone grew up around the movie business, Steve is a lifelong environmental activist, and Maarten is a deep and serious researcher. Nothing hits the front page here without a lot of work. In that sense, the drive-by dismissals are not just annoying, but infuriating.

I have an idea about how commenters might better approach us, or me in particular, when you think I have screwed up. I covered some of this in the comments yesterday.

That’s all. I have met many good and interesting people via this blog, and want that to continue.

28 thoughts on “Follow-up to Baba Wawa”