As late as about 1994, people like say, Bill Gates, had no interest in the Internet. He wouldn’t even go to conferences about it, because he didn’t see a way to make a profit from it. (Chomsky, interview with Corpwatch, May, 1998)

The above quote, which I cannot source beyond what I have there, has stuck with me over the years. It indicates that perhaps Bill Gates is no guru, and falls in line with Nassim Taleb’s musings in his book The Black Swan that there isn’t as much financial genius in the world as we like to think, but rather a whole lot of luck. Maybe Gates just got lucky.

This is taken from the book The Drunkard’s Walk by Leonard Mlodinow, p207 forward:

I was watching late-night television recently when another star, though not one from the entertainment world, appeared for an interview. His name is Bill Gates. Though the interviewer is known for his sarcastic approach, towards Gates he seemed unusually deferential. Even the audience seemed to ogle Gates. The reason, of course, is that for thirteen years straight Gates was named the richest man in the world by Forbes magazine. …

And so when he was asked about his vision for interactive television, everyone waited with great anticipation to hear what he had to say. But his answer was ordinary, no more creative, ingenious, or insightful than anything I’ve read from a dozen other computer professionals. Which brings us to the question: does Gates earn $100 per second because he his godlike, or is he godlike because he earns $100 per second?

Mlodinow goes on to describe the origins of Microsoft. IBM, whose success was built largely on government subsidized research, had belatedly decided to get into the personal computer business, that bevvy of geniuses having dismissed the trend in its planning during the 1970’s. They did not even have a program to run a PC, and so approached Gates for some help. Gates didn’t have one either, and referred them to Gary Kildall of Digital Research Inc. Talks did not go well between Kildall and IBM, and another IBM employee, Jack Sims, approached Gates again. He still did not have a program, but began to show his true “genius.” He knew someone who did.

The system Gates had in mind might well have been based on Kildall’s work. Gates asked if IBM wanted him to go get it, or if IBM would do that dirty work itself. Sams, understanding what was going on, insisted that Gates go get it, hint hint.

Gates did, for $50,000 (or, by some accounts, a bit more), made a few changes and renamed it DOS (disk operating system). IBM, apparently with little faith in the potential of its new idea, licensed DOS from Gates for a low per-copy royalty fee, letting Gates retain the rights. DOS was no better – and many, including most computer professionals, would claim far worse – than say, Apple’s Macintosh operating system.

Ergo, the conundrum so many of us have faced over the years – crappy PC technology dominates the market because IBM had market power at that time. “People bought DOS because people were buying DOS.” Gates and Microsoft amassed a huge war chest of money, and from there started to buy up competing companies and to reverse engineer technology, including Apple’s icon-orientated home screen so common now on computers.

With the internet, which Gates pooh-poohed, came the need for a means to access the web, and with some government funding, the Netscape Navigator was born.

Microsoft wanted none of that, and pushed its own product, the Internet Explorer on the market in a now famous scheme whereby IE was pre-installed on new PC’s. Netscape, long gone now, would sue and win a settlement, but IE by default became the market standard. Mozilla’s Firefox, which I use, is a superior product, but IE is the only program on any new PC that I have purchased over the years. 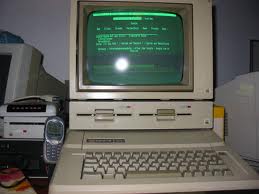 My first computer was and Apple IIe, and I hadn’t a clue how to make it work. It sat there. I set it up to download stock quotes for my then boss, and each time we did a download, the company providing the quotes charged us. When the bill came through, it said we were downloading “recipes,” and my mercurial boss shut us down, saying that she had more important things to do than to provide cooking ideas to her staff.

Later came VisiCalc, and at last I could put the computer to work in a practical way. Later still I bought a program called “Appleworks,” a combined spreadsheet/word processor/database. It was a remarkable program for its time. My employer owned around a thousand mineral deeds in various western states, and with Appleworks I was able to input all of the information on those deeds using over twenty parameters, and thereafter quickly locate any one for any reason. All of this before Lotus and the crappy Microsoft Office system, which now dominates the spreadsheet market. That’s becuase PC’s dominate the market.

Bill Gates is no genius, and perhaps that’s the reason he feels a need to give away so much of his fortune. If only the rest of the financial world would see it that way too. In mutual funds, for instance, given that there are thousands of them, it goes with out saying that maybe a hundred of them will outperform the others in any arbitrary period, say, a calendar year. The next year, it will be a different hundred. In the meantime the underlying companies whose stock make up the portfolios are working hard to develop products that might or might not tempt the market and create some success. No one knows which will survive or thrive. There are no geniuses. The future is just a damned mystery.

Wall Street financiers have worked a clever way around market uncertainty. Money itself has become the driving force, the thing that creates wealth. Speculators have devised financial products that are themselves considered commodities for trading without any underlying product or idea or entrepreneurial genius. It’s a house of cards, of course, and so collapsed in 2007-2008. It’s been rebuilt, and will likely collapse again, though I do not know the future. But as they say about North Dakota, there is no there there.

I was recently asked by our former landlord in Boulder about the future – what’s going to happen with the stock market, is the economy going to start ticking again. I informed her, with all the sincerity I could muster, that I had no clue. This left her cold, and no doubt she ran to a financial adviser for better advice. I sympathize, but life offers no certainties, no geniuses, and charlatans rule the financial world. The best thing to do is hope that you can pull a Gates, and get lucky.
_____________
Update: No sooner is this post up than I learn that Microsoft is going to buy Skype. Apparently, the reverse engineering failed.

15 thoughts on “The genius of Bill Gates: Steal it first”