John Armstrong wrote the book Harvey and Lee, which I have read and Tyrone has referenced in his paper on the JFK assassination, JFKTV. It is more a manuscript in need of editing than a book, 983 pages, laying out his exhaustive research on the matter of two Oswald’s. One was “Harvey,” a man he believed to be a Hungarian emigrant to the US who could speak fluent Russian. The other was “Lee,” a New Orleans-born man of coarser roots, not as intellectually gifted.

Armstrong never voiced the suspicion they were twins. I never suspected as much either. I don’t know their origins, nor how much of their back story is planted mythology. I don’t know that one ever went to Russia, or lived in Minsk. There was indeed a KGB Intelligence agent named Marina Prusakova, a woman who by appearances seemed appointed to canoodle with a whole troupe of fake American expatriates. She married one of the two, it appears. But I know now that there was high-level cooperation between the US and the USSR during the Cold War (and now), and so have a hard time imagining that all of them, the two Oswald’s and Marina, were not employed by the same people. 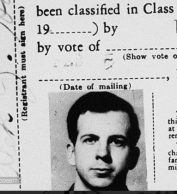 Here to the left is a photo of Oswald, perhaps Armstrong’s most important discovery. The man we came to know as Lee Harvey Oswald was a composite, and so is his most recognizable photo. So well-planned was the JFK fake murder that the perpetrator, two intelligence agents, was blended before our eyes into one. That way when we saw a photo of either, recognition was triggered. The photo to the left is two men made into one by means of some professional “face chopping,” as Tyrone calls it.

Some time back, upon acceptance that John F. Kennedy had faked his death, I gathered up all of my JFK books and took them to a local second-hand book store, including Harvey and Lee. I could go there right now and buy it back, I am sure. I have read it, as has Tyrone, and an Intel agent named Len Osanic who runs a propaganda site called Black Op Radio has too. But I think that is it in terms of people who actually waded through the book.

Lee Harvey Oswald did not die on November 24, 1963. They faked that too. The basement of the police station was a television set, and Jack Ruby was an actor. Oswald did his part and then disappeared from the scene. James Douglass, in his book JFK and the Unspeakable: Why He Died and Why It Matters writes of an odd encounter of a young soldier traveling to Colorado Springs in the aftermath of 11/22*, getting on a military plane that had stopped in Dallas to pick up two other soldiers, one of whom was Oswald. Douglass might be a real man and not a spook, but if so he has performed a huge disservice in lionizing JFK. That man was no saint. Douglass got it wrong.

I spent yesterday afternoon doing something I’ve meant to do for some time now – finding and separating the Oswald twins. I do not know which is Lee, which is Harvey, because I do not know their real names. If Armstrong is right, they were raised separately by separate mothers, one in New Orleans, one in New York and other places, even a stint in North Dakota. I do not know their origins other than what was planted for us sleuths to find. I just know they are two men.

Here is Twin One, who I think Armstrong called “Lee:”

The middle photo there is from the famous “back yard” sequence. In that, his head was superimposed on the body of another man, as he was apparently not available that day for a photo shoot. Or, more likely, they were just messing with us, appearing to frame him.

And here is Twin Two, who Armstrong labeled, I believe, “Harvey:”

That first shot is at the Dallas Police Department after his arrest at the theater. I always thought him a man on whom the weight of the world had just collapsed, but not so. He knew stuff.

Facial splits, or “face chops” highlight slight differences in the two, and it took me some time to set them apart. However, if Armstrong is correct, they were easily distinguished by build and temperament. Lee was heavier, more outgoing and more muscular, while Harvey, who officially took the fall for the murder, was smaller and more bookish. (Who knows – he might even have read, for real, Catcher in the Rye!)

Here are a couple of chops:

Slightly elevated eye, slightly lower ear. That’s about it. Really, really hard to spot. And another:

Again, same differences. I do not know the true value of Armstrong’s work, but I do credit him with my own ability to recognize the two Oswald’s.

Finally, as best as I can construct, are the two photos that were used to blend the ID card of Alex Hidell above, my own re-creation of that piece of work: 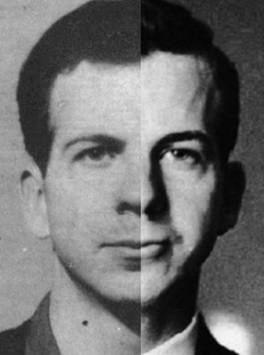 Notice how on the photo on the right, the ear is completely black. That is because they had to move it slightly so the two ears would align. To cover up the move, since this was such an important piece of photo pasting, they blacked it to cover any sign of a paste-up.

Anyway, that is it – Lee Harvey Oswald, one of the most famous sets of twins in human history. I hope they both lived long and productive lives.

(By the way, it has been noted on occasion that famous assassins like Oswald, John Wilkes Booth, James Earl Ray and Mark David Chapman go by full names, first, middle and last. I suggest a topic for research: This is done by Intelligence to signal to one another that we are dealing with twins?

Then, of course, there is Sirhan Sirhan.

PS: It just occurred to me after publishing this and re-reading that Marina Prusakova Oswald might have been a beard. She might have been seen in public with both Oswald’s, just as Jane Asher was with Paul and Mike McCartney, and Pamela Courson with Jim Morrison and his later-life body double. I leave that matter unresolved.

7 thoughts on “The Oswald twins”