This article, Spread of the Spanish Flu Was Never Experimentally Confirmed, has details and evidence that I was searching for. It is written by Shin Jie Yong, a Malaysian “postgrad” in neurobiology. It is important to note that Yong is a proponent of germ theory, and since these results fly in the face of that theory, he doesn’t understand or accept them. He merely walks away from the evidence saying “We’ll probably never know the answer.”

No sir. We probably do.

The article is short, taking less than five minutes to read.

The obviouis conclusion, or at least direction of the path of evidence, should have been that the Spanish Flu was a variety of things, none contagious. Instead, Yong concludes that they Navy volunteers were immune. So they redid the experiment, this time using 50 Navy volunteers. None fell sick, but one doctor became ill. They could not prove human-to-human transmission.

The leader of the study, Dr. Milton J. Rosenau, concluded not that the disease was not transmissible, but rather that the volunteers were immune to it. Said Rosenau,

“We entered the outbreak with a notion that we knew the cause of the disease, and were quite sure we knew how it was transmitted from person to person,” he concluded. “Perhaps, if we have learned anything, it is that we are not quite sure what we know about the disease.”

I would drop the word “the” from its place before “disease.”

Another Doctor, John M. Eyler of the University of Minnesota, concluded in 2010 that “It seemed that what was acknowledged to be one of the most contagious of communicable diseases could not be transferred under experimental conditions.”

That’s weasel wording, avoiding the obvious. He needed to drop the words “under experimental conditions.”

This reminds me of the efforts of Thomas Rivers during the 1930s to rescue virus theory from Koch’s Postulates. Those postulates have never been met with any disease, even bacterial, because the first one says that infected people carry the pathogen while healthy people do not. Even something as common as strep throat, said to be highly contagious and caused by the streptococcus bacteria, does not meet KPs because that bacteria is in most if not all of us, healthy and sick. Undaunted, however, Rivers merely adopted a new set of postulates for viruses that claimed they cause disease while at the same time acknowledging that there are “asymptomatic carriers”,

That is still being thrown in our face today with Covid-19. The logical conclusion, since viruses don’t always (ever?) cause symptoms, was that viruses (whatever they are) don’t cause disease. Rivers, employed by the Rockefeller Foundation, could not go there.

Just as with Yong above noting that there was no experimental evidence to show that the Spanish Flu was transmissible, evidence that does not support germ theory is usually ignored. That’s all that the medical profession has done with the Rosenau study, ignore it. Yong continues to do so. Careers depend on it.

I do not understand the causes if the Spanish Flu, but at least have the good sense to admit my lack of insight. A matter known as “World War I” might have had an effect. Further, I cite below an intriguing passage from Mike Baillie’s book New Light on the Black Death:

“Take this example from the ice-core records. If you access the particulate record from the American GISP2 ice core, you find that they give both the numbers of particles in the ice and the size of the particles through time. They provide this information running back to the seventh century. If you look at this 1300-year record you discover that the section of ice with the most particles and the largest particles is 1920-2. This spike is so huge in comparison with anything else in the record that it stands out like a sore thumb. There is a lesser but still outstanding spike in 1916. What on earth was the “event” that causes 1920-2 anomaly? One could possibly understand something in the middle of World War I putting dust into Greenland, but it’s hard to think of a “once in 1300 years” happening around 1920. Thus, as recently as the 1920s, when the world was well-connected, we have a complete enigma involving anomalous amounts of course dust – someone might like to solve this little enigma! Examples like this one (and there are many, many others relating to past happenings) suggests the past is really a bit of a mystery.” (Page 116)

What to make of that? I don’t know. I only know that the hunt for viruses precludes any real understanding of disease. We’ve got to come to our senses sometime soon, and allow medicine to exit the Dark Ages.

The measures put in place to fight Covid-19 are masks, distancing, quarantining, forcing people to stay at home, forbidding public gatherings, shutting down economies, closing churches and tossing the Bill of Rights out the window. This is all done without any scientific evidence to support the efficacy of any of these measures. The reason for this must be as it appears – that the measures are intended for other purposes having nothing to do with disease and everything to do with social control. The alleged virus is the means to another end. Bill Gates is not an humanitarian. Quite not.

I grabbed these words from the Sid Luckman post I wrote about a couple of days ago, More Truth Pills to Cure the Germ Theory Blind Spot. I think he sums it up nicely. 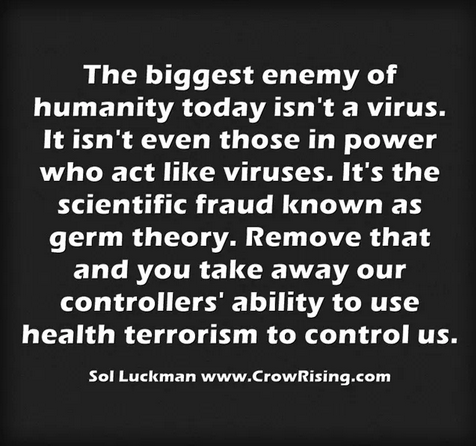