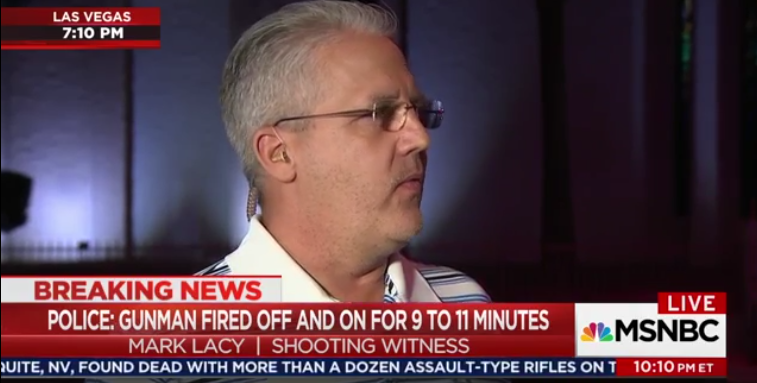 Mark Lacy of Tuscon, Arizona, happened to be in Las Vegas and witnessed the shootings first hand.  The above grab is from a 5:55 interview with him (did it run 2:22 long?) which included the following exchange:

Interviewer: “Did you consider that this might mean the end for you?”

Seems like we have heroes at every turn that night. Lacy, who we are told retired from the military 11 years ago, is remarkably composed even as a person next to him was shot in the head. He tore gates off their hinges to use for stretchers, carried out both dead and alive, warned people to safety.  He made it to television to tell his story, as did so many others who were called on to act in that crisis.

I looked for Lacy on Facebook and thought I briefly had him – there was a Mark Lacy in Tuscon with the initials “USAF” by his name, but it has since disappeared, perhaps too many people seeking out this American hero. When I was first introduced to him via a Facebook friend, I was told he was a Lieutenant Colonel. But there is no mention of any rank in any of the articles that I see, only that he was a former military policeman who apparently served in Iraq, Honduras, many other hot spots.

Here’s a snippet from another interview, a genuine money quote:

“When you see parts of individual’s heads off and lifeless individuals that look like they’re sleeping but there’s no pulse and you don’t know what’s happened,” he said, his voice trailing off.

“It’s just something you’re trained for, but you don’t necessarily think at a concert you’re going to have to do that.”

I don’t know why genuine heroes are so often so modest, in this case falling back into passive voice, second person, to describe his reactions. A cool rock, only carried kindness out for saving helpless innocent targets.

OK, I have to let you in on the joke, as it is too deeply buried. The first letters of the last sentence of this post are an acronym: “A crock of shit.” This guy is filthy.

47 thoughts on “An American hero”