This struck me as kind of odd, but seems to fit within the larger story of Pearl Harbor, if you think of it. I’ve never looked into that day, but I know there is skepticism in our readership here, so that I hope to get some comments from people who have looked into it. What little WWII dabbling I have done was in the matter of Iwo Jima, where I came away with the distinct impression that it was a small incident that was by means of stagecraft made into a large one. (Why else would the Secretary of the Navy be on a beach in a combat zone, unless he knew he was safe? The photo of the flag raising that day, admitted by all to be staged (now it can be told), is nonetheless magnificent.

Thinking about it, how did people get information back in 1941? There was radio, newspapers, newsreels, some telephone (long distance was expensive), word of mouth*  … that’s about it. If a large hoax was to be pulled off, it could certainly be done given limited media to control at that time. I wonder if, as with the moon landings and 911, there was wide and unreported skepticism at the time.

Pearl Harbor happened on a Sunday at around 8AM Hawaii time, making it 2PM to 11AM our stateside time. It would then operate like a slow moving storm that picks up energy, so that by late in the day there was general fear, panic, outrage and confusion. A lot of men, like my Dad, probably thought “Oh boy, I’m gonna be drafted.” (He was. He lived to tell his story, never seeing combat. No one in my extended family was killed or injured in that war.)

I don’t know how much of the attack was real, what role the Japanese actually played, but it was surely suspicious in this sense: Hitler used the opportunity to declare war on the U.S. Otherwise, the there would have no call or legitimacy for the U.S. to enter the European theater. That makes little sense. Why would Hitler invite a new enemy?

Doris (born 10/12/1919) was a black man. Wiki says he was “Dorie” to friends and family. The story given us is that “… midwife the who assisted his mother was convinced the baby would be female.” [Footnote 8] A midwife names the baby instead of the mother and father? Even if so, you don’t just change it? His name being “Doris”  makes as much sense as Shel Silverstein’s A Boy Named Sue, as any kid really given such a name would just invent a nickname, like Bill, or George …

Here is Doris’s record of activities on December 7, 1941:

On December 7, 1941, Miller was a crewman aboard the West Virginia and awoke that morning at 6:00 am. After serving breakfast mess, he was collecting laundry when at 7:57 am, Lieutenant Commander Shigeharu Murata from the Japanese aircraft carrier Akagi[6] launched the first of nine torpedoes that would hit West Virginia. When the “Battle Stations” alarm went off, Miller headed for his battle station, an anti-aircraft battery magazine amidship, only to discover that a torpedo had destroyed it.

He went then to Times Square, a central spot where the fore to aft and port to starboard passageways crossed, and reported himself available for other duty.[6] Lieutenant Commander Doir C. Johnson, the ship’s communications officer, spotted Miller and, seeing the potential of his powerful build, ordered him to accompany him to the bridge to assist with moving the ship’s captain, Mervyn Bennion, who had a gaping wound in his abdomen, where he had apparently been hit by shrapnel. Miller and another sailor lifted the skipper and, unable to remove him from the bridge, carried him from his exposed position on the damaged bridge to a sheltered spot behind the conning tower.[9] The captain refused to leave his post, questioned his officers about the condition of the ship, and gave orders.

Lieutenant Frederic H. White ordered Miller to help him and Ensign Victor Delano load the unmanned #1 and #2 Browning .50 caliber anti-aircraft machine guns aft of the conning tower.[10] Miller was not familiar with the weapon, but White and Delano instructed him on how to operate it. Delano expected Miller to feed ammunition to one gun, but his attention was diverted, and when he looked again, Miller was firing one of the guns. White then loaded ammunition into both guns and assigned Miller the starboard gun.[6]

Miller fired the gun until he ran out of ammunition, when he was ordered by Lieutenant Claude V. Ricketts, along with Lieutenant White and Chief Signalman A.A. Siewart, to help carry the captain up to the navigation bridge out of the thick oily smoke generated by the many fires on and around the ship. Bennion was only partially conscious at this point and died soon afterward. Japanese aircraft eventually dropped two armor-piercing bombs through the deck of the battleship and launched five 18 in (460 mm) aircraft torpedoes into her port side. When the attack finally lessened, Miller helped move injured sailors through oil and water to the quarterdeck, thereby “unquestionably saving the lives of a number of people who might otherwise have been lost.”[11]

That’s quite brave, and I take nothing away from the man save the appearance of footnote “11”. Our old friend and writer Straight asserted that Wikipedia used footnote signals to point at lies, exaggeration, and misdirection. This article features prominent placement of both 8’s and 11’s. 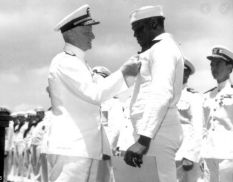 At that point in time, Doris was “an unnamed negro,” and remained so until a Pittsburgh newspaper found and published his name. At this point, blacks around the country began to pressure the congressional Naval Affairs Committee to recognize not just Doris, but other blacks in military service. Doris was given the prestigious Navy Cross for gallantry during combat while shipboard and in the Pacific. It appears to me that the man in the photo the the right and the man in the poster above are one and the same man, though I have no way of verifying who this man is or his name.

Doris for a brief time came stateside and participated in a War Bond tour. He then returned to service, and was killed in action while serving aboard the USS Indianapolis on November 24 (=8), 1943, at the age of 24.

Nothing about this is suspicious except placement of ‘8’s and ’11’s’ in the Wikipedia entry, and the name Doris. So, since I am suspicious, I have to wonder why such a man would be constructed, given a female name, and then killed. I come up with this:

Why, then, was Doris Miller killed? Better a dead hero than a live one who has to carry on the acting role for decades. Or this … the actor hired to be Doris wasn’t good for the part. They needed to get him out of their hair, and so retroactively placed him aboard a vessel that had real casualties. While not unusual in wartime, his parents were not informed that he was missing in action until, get this, December 7, 1943. He was declared dead on November 25, 1944. The real man in the photo lived on, that is, if Doris is fiction.

Of course, I could be wrong. If the man’s name was Jimmy or Mark or Nat, I would not have given this a second glance, just another war story. If indeed it is a real story of a real man, I offer my apologies to his family. He then died leaving no descendants.

Why a female name? I haven’t a clue. I am open to everything, including the whole affair, including the attack on Pearl, being real. That has to be listed among the range of possibilities. However, both Pearl and Doris have that feel about them. They do not smell right. Worse yet, I feel as though I am overlooking something painfully obvious. If it comes to me at all, it will be days from now, and at three in the morning.

*Also, letters, a lost art. My mother had six sisters. They used to keep in touch by letters, and each letter was included with others and sent along, so that every now and then Mom would get a packet with six or seven letters in it.

13 thoughts on “A boy named Doris”