This post was originally published in August of 2016. There’s been an ongoing debate about the comedian Bill Hicks, who in my opinion faked his death and re-emerged as Alex Jones. Some of the drawbacks to this are facial differences, like a more pointed nose for Jones, easily done by plastic surgery, a thinner lower lip, ditto. In the first photo below, image three on the far right of Jones shows telltale lines indicating some plastic surgery. I have seen these as well on both McCartney’s, Paul and Mike.

However, the post below was a different story – someone had put up the two photos, one of Hicks and one of Jones, saying that Jones has a smaller mouth than Hicks, but what jumped out at me instead was that I was looking at identical teeth. Further down in the post you’ll see a Photoshop overlay in which every single tooth in both mouths line up exactly.

Another objection was voices, Hicks higher pitched than Jones, whose is almost guttural. I thought that for his TV show Jones could easily be speaking into some sort of voice distortion instrument, and that still might be the case. However, I was reading a Michael Connelly book (The Narrows) and in it the lead character, Harry Bosch, mentions that someone, a really bad guy, had probably had surgery to change his voice. I wondered if this was common.

Googling “surgery to change voice” I found it quite common, most often in women who want to sound more feminine. But there is thyroplasty surgery, which does indeed lower a man’s voice. I thought – what the heck – – the had Hicks under the knife for plastic surgery anyway, a makeover, so why not change his voice too?

My colleague Straight wants me to move forward, to get better at using PhotoShop. It offers a far wider array of possibilities than my current tools. I have been using them because I have so much work ahead, and don’t want to take time to learn such a big and complex program. But I must. Fortunately, Straight is already well-versed.

We were attacked over the weekend with what appears to be honest but misguided criticism, that the Bill Hicks/Alex Jones comparison is bogus – a golden apple laid out by Intelligence just waiting to be found. I was aware of that possibility, which is why I went to videos, and not Internet images, to pull two together that showed his features to align.

The comparison is difficult, as Hicks has had plastic surgery to become Jones. But I am convinced they are the same man not just by photo comparisons, but also by profession (both fake “conspiracy nuts”), demeanor (both actors who can project intense venom), having the same cameraman and producer, Kevin Booth, and the simple fact that any damned fool can see that Alex Jones is not 42 years old, but rather a man in his fifties, as Hicks would be. Add all of that to alignment of facial features that cannot be changed by plastic surgery, and we have our man.

The person who attacked us lined up several photos side by side looking for differences, as skeptics do. Straight was able to set them to the right proportions, but we noticed something in all of them. See what you think:

The critic is saying that Jones obviously has a smaller mouth than Hicks, but he shot himself in the foot, as Straight and I noticed that Hicks and Jones have exactly the same teeth.

But this calls for PhotoShop, and Straight can do this sort of thing. Here are his four overlay progressions after aligning the photos based on the teeth: 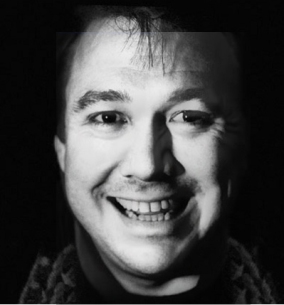 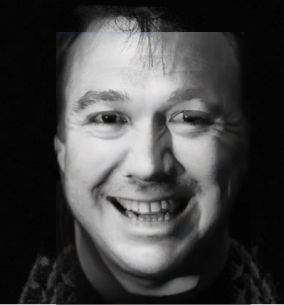 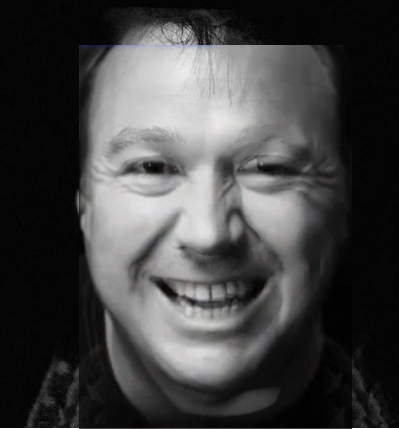 In the end, the teeth in the largest photo there are overlaid over the Hicks teeth in upper left. Note how they align with precision.There is only a slight ghosting effect, but no teeth in different positions.

Focus, if you will, on the teeth as you watch that. After all, what are the odds of perfect alignment of one tooth in one photo, much less the whole rack, on two supposedly different men? Statistically speaking, Straight has proven beyond reasonable doubt that Bill Hicks became Alex Jones.

PS: On the last Jones photo in the gif, or the one on the bottom where all four faces are displayed above, notice the lines extending outward from his eyes. Those are crow’s feet, and not the result of natural aging. Instead, they are a result of extensive plastic surgery, the only reason there is any question about his identity. I expect he may go off the air here soon, maybe a hiatus, as more surgery is necessary to cover those scars.  Or they may just can his ass. We saw this too with both the McCartney boys.