One of the aspects of this psychological warfare operation that requires careful consideration is the script. Hollywood is by now understood to be another arm of military intelligence. It is also the most prominent and most visible part of the propaganda agencies that speak for the government and those that own and control the government. One does not rise to prominence in such a critical field unless thoroughly vetted to insure cooperation in pushing the controller’s agenda.

Along with attendant operations such as money laundering through massive over capitalized budgets, the steering of these feature length commercials for American exceptionalism are never left to unleashed “artists”. Feature film directors are very much in lockstep with the agenda or they simply don’t get funded.

One individual who seems to fit the bill as the primary creative force in shaping the JFK narrative is the film director John Frankenheimer. Educated at the elite La Salle Military Academy and even more prestigious Williams College, this son of a stockbroker* made his first documentary with an Air Force squadron in Burbank California. We can be quite certain the studio facilities used were both the Disney studios and those facilities located at Lookout Mountain Air Base atop Laurel Canyon in Los Angeles, home to innumerable films commissioned by the military and intelligence services throughout the mid-20th century.

* Oliver Stone, who took over for Frankenheimer as the primary director of the ongoing JFK project, but also wrote and directed the successor hoax to JFK, 911, also had a father who was a fixture on Wall Street; this is not surprising given that Wall Street was reinvented by Joseph Kennedy Sr. at the behest of FDR during the depression. Like Hollywood, another Joe Kennedy reinvention, Wall Street was largely a money laundering scheme for government graft and certainly laden with well-vetted spooks in the boardrooms and on the exchange floor..

With these military bona fides, Frankenheimer segued into television production at that bastion of pro-military propaganda, CBS, operated by a super spook named William Paley, and started a career that lead to the three films that spell out exactly what the JFK hoax entailed: On October 24th, 1962, during the Cuban Missile Crisis Hoax*, Frankenheimer released The Manchurian Candidate with Kennedy camp follower, Frank Sinatra, in the lead role.

* Though touched upon later, there are, in fact, no nuclear weapons. The ever-present threat of global annihilation is the biggest hoax since Armageddon was concocted by Christian mind benders and preached from every pulpit in creation.

The plot involves an American POW in the clutches of the Chinese and Korean communists and the process of programming him through mind control techniques to assassinate the President of the United States.

On the surface the film depicts the combatants of the Cold War at odds with each other, although, despite the heroic yet tragic ending, the film is really about how the two sides collaborate to shock the masses into accepting radical change. The POW’s mother is a communist collaborator who is depicted as a traitor from the level of the pawn, her son. From the level of world finance, she’s a tool to keep the Cold War hot, the common people in stasis with fear and without their critical faculties engaged, thus assuring that military budgets remain bloated. The ending is just a fig leaf to disguise the truth of collaboration at the highest levels.

The film was eventually pulled from circulation because of the similarities to the “real” assassination of JFK. A later cover story claimed it was pulled because Sinatra had a dispute over royalties. Well, Sinatra was quite famous at the time but he was well understood to be a stooge of the mafia and it’s highly doubtful he had the pull to challenge a studio engaged in the most sophisticated of military propaganda.

The film had done its job and was shelved for later use. It was eventually rereleased in 1988, near the twenty-fifth anniversary of the assassination. It is certain that Oliver Stone’s production of JFK was long in the planning and the rerelease of The Manchurian Candidate not only stoked people’s memories, it was also a test to see if there was sufficient curiosity in the case to effect the coming propaganda push that would result in the creation of the Assassination Records Review Board which would release most of the remaining government files regarding the case. That question was answered by the large public gathering at Dealey Plaza that November 22 which took most media outlets by surprise. If nothing else, it validated the mind bender’s investment in Stone’s production. There clearly was an audience for more JFK fiction on film.

One more very important component to the hoax process that The Manchurian Candidate provided was what I referred to earlier as the announcement of what is to come. The cover term for this admission of future guilt is referred to as predictive programming, or in some instances requiring specific group behavior, pattern recognition programming. Sinatra was involved in an example of the latter: In the late forties when the mob and Hollywood selected a scrawny saloon singer from Hoboken to distract a new postwar teen audience, girls were paid to scream on the street for Frankie in front of news cameras after a concert. The footage was distributed to movie house newsreels and a pattern of behavior was embedded in the impressionable minds of the sudden swell of bobbysoxers craving Frank’s attention. Boys may not have ascertained what the appeal was but if they wanted to be with the girls they had better adopt the Sinatra pose. A decade and a half later the process was repeated verbatim and Beatlemania was launched, conveniently enough just weeks after the stage show in Dealey Plaza.

Staged hysteria- The Skinny Guinea rides on a wave of manufactured consent.

A decade and a half later, British girls were paid in Pound Sterling to lose it over the Mop Tops, kicking off the post assassination distraction, Beatlemania, the first salvo in the controlled demolition of the culture.

Once leveled, the culture was rebuilt to grandfather out dissent and fetishize material consumption and militarism.

Complete rubbish. Rental Bobbies hold fast against a tidal wave of Zulu banshees storming the ramparts to get at their quarry, the Intel operation known as The Beatles. The painted backdrop is courtesy of Pinewood Studios.

The second film in the Frankenheimer/JFK trilogy was Seven Days in May, a tale of an attempted military coup staged right out of the Pentagon. With The Manchurian Candidate stating what they were going to do, Seven Days in May purports to show what they actually did do. The military did in fact overthrow the government. They did not do it on November 22, 1963. They finalized the process on September 18th, 1947 with the implementation of the National Security Act, the final nail in the coffin where America’s democracy lay in state. The stagecraft of the JFK assassination was a pantomime, in a cascade of mysticism, of that event from sixteen years earlier.

This Act, as if in a play, is part of the confession of guilt that absolves the perpetrators. The lack of reaction from the public is taken as implicit approval. Any dissenters are herded eagerly into the corral of conspiracy research, ever after searching for a body of evidence that never existed. Within the legal framework of the National Security Act, no criminal guilt is assigned to anyone involved, no trial can be held, no one involved loses any sleep over being found out about a crime that was never committed. 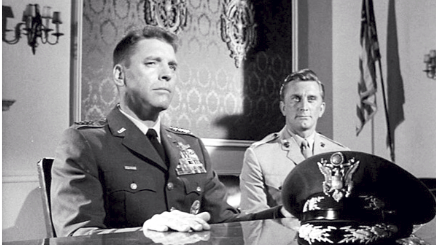 Burt Lancaster as a traitorous General Edwin Walker type in Frankenheimer’s Seven Days in May, flanked by reluctant good guy, Kirk Douglas; another mythical tale of the rule of law über alles, even at the expense of loyalty oaths to the Masonic cabal known as the Joint Chiefs of Staff.

And this stress free living is the selling point, along with whatever money changes hands. Cortisol secreting into a worried man’s blood stream over time can kill as certain as a frangible bullet from a high-powered rifle into the parietal lobe. And recruiting from any number of fraternal orders, be it police, mafia, intelligence agencies, secret societies and/or religious groups is a lot easier and less expensive that asking men to commit a capital crime, especially the cold blooded murder of the President of the United States.

Of course Seven Days in May has a cop out ending, just like The Manchurian Candidate, but the spectacle that precedes it is the message. The military runs things from behind the curtain, the election circuses are for hoi polloi.

The third film in the trilogy is Frankenheimer’s “Seconds” from 1966. It is a further admission that the assassination was a hoax as the question of what happened to Kennedy after he disappeared off the motorcade route is explained.

This film is based on a novel with the same title by a Harvard and Oxford educated American named David Ely. It is interesting to note that the novel was released in 1963. Likely Ely, a military veteran with coherent writing skills, was recruited to write for the CIA, especially for this particular novel. It is a pebble dropped in the lake and the film that was based on it is the outlying ripple that reached a much larger public. The fact that Ely lived in Cape Cod, Massachusetts may or may not be of any significance in relation to the dominant presence of the Kennedy clan in that state.

The film stars the Kennedyesque Rock Hudson, though his character begins the film played by a much different actor, John Randolph. The plot involves the Randolph character willingly undergoing a fake death and radical surgery to come out as a completely different person with a new identity, location and past.

This is where Rock Hudson takes over the role as the same man transformed. As with the other two films, the ending shows the ruse as a dead end, but again, the process that precedes the conclusion is the real point, the admission that JFK had been living somewhere else as someone else. The only people privy to the truth were family members vetted by the intelligence services overseeing this project- as to JFK’s whereabouts right after the assassination? Think Greece. 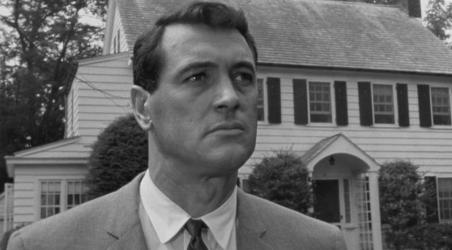 Seconds from 1966. Is this Hudson? Kennedy? Tippit maybe? 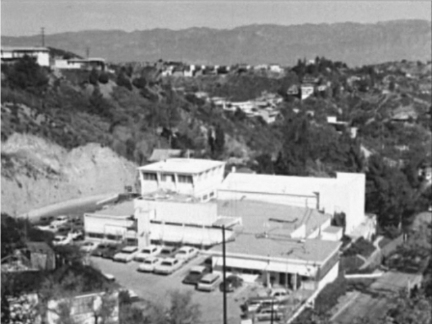 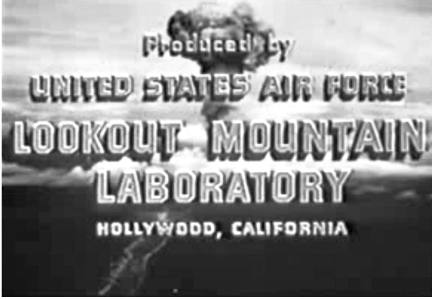 If there was a facility to plan and create the narrative and imagery of the Kennedy assassination, it would be here, a facility that likely trained Air Force recruit John Frankenheimer

Other parts of this series: