When I was researching the Waco “massacre,” a light went on – that the buildings were empty, and that the whole thing was just a TV show. I laughed out loud with that realization. With Columbine, the little light told me that the SWAT unit that was mobilized was there to keep people out of the school, and not to interfere with anything inside. It was a made-for-TV-news event.

A light has gone on about Jonestown, but it is faint. Please follow along.

“Fake?” Yes, fake. As with Waco, it is the “survivors” who make it come alive. There is Stephen Jones, Jim’s son. He just happened to be in Georgetown, part of a basketball team. There is Vernon Gosney, who left his son behind and left Jonestown. In fact, we are told, 909 died on the scene, and 33 survived. Those numbers do seem to pop up in fake events. In the documentary I watched this morning, Jonestown Cult Suicides: The true Story, Jones and Gosney played significant roles. They are acting. They are still on the payroll.

The logistics of Jonestown have troubled me … how to feed 1,000 people when the soil is judged inadequate for farming. There is a dirt airstrip at Kaituma, five miles away. Everything that comes into Jonestown must come from there. Transport planes cannot land there, but in films we see a large tractor that is used to pull a trailer. How did it get there? We see land that had to be cleared by … hand? We see all of the building materials that had to be hauled in, and roads. In the photo above, the place is surrounded by roads. There are 48 units for the residents, so that they lived in pods of 20 or so.

[The red arrow points at an area that, to me, look ideal for landing of helicopters. I cannot imagine any other use for bare ground except, perhaps, a parking lot for heavy equipment.]

One thousand people have to be housed, fed, clothed. How many cooks were on duty for three meals daily? What about sewage? Did they build pit latrines as the military does? They had fresh water, we are told, from wells. Food had to be shipped in, of course.

Honestly, it looks to me like a mining operation. If that, then helicopters could be used to move people and material into the site. Large equipment in remote locations is what mining companies are good at doing. 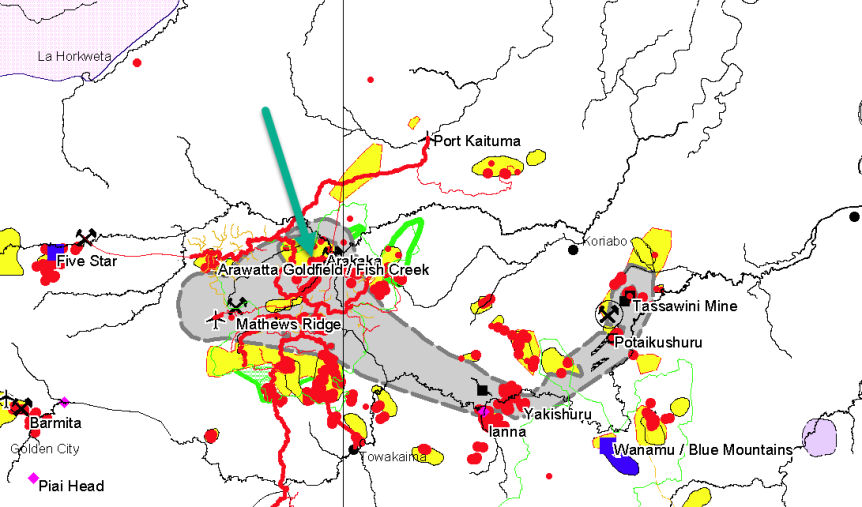 This is a map of that part of Guyana taken from the website of the Guyana Geology and Mines Commission. Check it out for yourself here. According to the legend, not seen here (the map is too big to reduce to this website), yellow is known gold deposits, and the gray is manganese. I added the green arrow to point at Jonestown. It is very near gold, and right in the middle of a manganese source. Both would require open-pit operations to extract the ore.

Notice the air strip at Port Kaituma. There’s another at Mathew’s Ridge. The red lines indicate four-wheel drive roads. The mining tool symbols, seen to the left here, indicate an active mining operation. There is one of those symbols right near Jonestown, obscured by the print on the map, under the word “Arakaka.”

This is a current map, and not one from 1978, but mines take years to put into operation, and run on for decades. These mines did not spring up yesterday. I would venture that in 1978 surveying and prospecting were going on, and crews were shipped in, housed, and rotated in and out for R&R, and that while they were working, they stayed in housing compounds.

So the notion that this area was jungle, uninhabited and unreachable is not true. It is primitive, but there are airstrips, mining operations, open pits, and heavy equipment that would have to be brought in on these roads.

And right in the middle of it all was Jonestown, a place that was used to house mining crews, and not cult members from San Francisco.

So that question is answered. Jim Jones and his followers did not build Jonestown. It was merely used to stage a photo-op.

I am done for today, leaving on another very short trip tomorrow, this time to Santa Cruz for a couple of days to visit a client. We will be staying in a cottage on the ocean. Life is good.

20 thoughts on “Jonestown: Not so remote after all”