[Note: Comments have been turned off on this post, accidentally.]

I had an embarrassing evening, a burst of excited energy shared with others followed by “Oops!” I eagerly contacted the other writers and a couple of friends of the blog to tell them that our work on Janis Joplin had disappeared! It had not. It was just buried under many other pieces in the blog search engine.  Following some chardonnay, I realized that I was excited for two reasons – one that someone cared enough to mess with our work, as when my Magic Bulldozer piece on Dennis Washington disappeared.

But the other was that I was going to be able to do the work again. It is the kind of stuff I really enjoy, discovery using my own talent rather than relying on others, and in the Joplin case, also that of our friend Straight. This morning, headache aside, I decided that I wanted to do the work again anyway. I have fresher insight into these matters now than two years ago when the original post, “A Piece of Two Hearts?” appeared.

First is the matter of face-splitting. I relied heavily on it back then, and when I realized that it had led to many mistakes of judgement, virtually abandoned it. But it is a useful technique. To the left is a split of me using two photos taken thirty year apart. My only adjustment to either photo was to set the pupils of my eyes at a common distance. That in place, look at the alignment of features!

What I learned over time, however, was that angles can cause distortion, and that led to so many errors even as I was aware of the problem. In my case it worked so well because I am the same person, and I tended to smile in the same matter with my head at the same angle even thirty years ago. So the technique worked beautifully.

That is a rarity, however. I moved forward to facial overlays using Photoshop, and use of ears and teeth. In fact, matching of dental records is used as positive identification in legal proceedings, though the joke is that if a meteorite were to fall on the Academy Awards, dental records would be useless. No one in the auditorium has original teeth. (I should talk.) However, and this is, I realize a hard sale, we did indeed match the teeth of Bill Hicks and Alex Jones – a precise match! What are the odds?

So what are the uses and limitations of face-splitting? If we are indeed dealing with the same person, it should be readily apparent. If it is close, but not precise, it is quite probably wrong. Thus did I go haywire on twins. But this reveals an even better use: Face splitting can reveal that two people are not the same person. Thus did the Janis Joplin twins reveal themselves. Here they are, side by side. 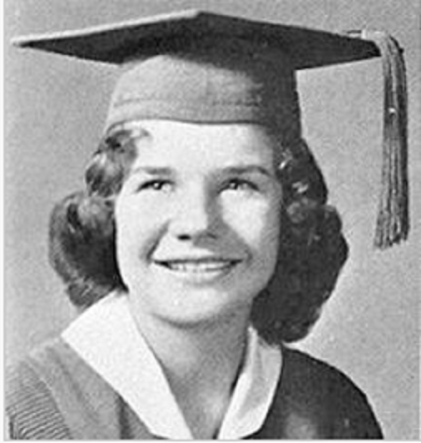 Some would say that use of the naked eye should be enough to tell them apart, and indeed I am able to tell them apart, but only after the fact. There are notable differences, not the lease of which is that one was prone to smile with an open mouth, and the other not. In fact, Straight and I concluded that the performer known as Janis Joplin, who had so much energy on stage, was the one on the right above.

Here’s a face split, eyes at common distance, nose as the lining-up point: 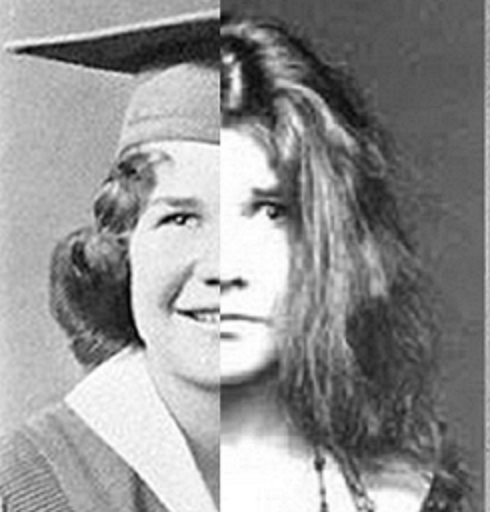 Say what you want about the mouth, as one is smiling, but look at the eyes! They fail to line up, and in fact are perhaps half an inch lower on the left-hand Janis. That alone tells me that these are indeed two separate people.

So how did they hide this from the public when she was performing? The two were never seen in the same place, obviously. In addition, they each wore bushy hair, probably wigs, that hid much of their faces. They were also known to sport very large glasses. But beyond those obvious techniques, no one noticed because no one knew even to think that she might be twins. It sounds absurd on its face.

So face splitting here is useful in determining that one person is actually two. However, in the original blog post, we took it a step further. At that time we knew that Dave McGowan’s book Weird Scenes Inside the Canyon was a limited hangout. All of the scores of deaths of rock stars and actors he described were fake, yet McGowan (who even used a fake photo in the book) only expressed mild doubt about Jim Morrison. So we knew that Janis Joplin had not died. One step further, we knew they had not died. Where did they go?

This is where Straight was so talented, scouting the landscape and seeing things from a different perspective. I developed some talent in this area, but none to match his. When he told me to check out Amy Goodman, we had not yet made the determination that Joplin was twins. So it worked, and then it didn’t, and I was ready to shelve the project. But once we knew she was twins, we were able to determine that one of them had indeed become Amy Goodman.

The photo to the left is Amy Goodman. It looks like it is from a high school yearbook, though all markers have been removed – that is, no name underneath, and for good reason. Amy Goodman says this is her photo. What more evidence do we need that this photo is indeed a young Amy than her own words?

Now, remember above how with my own photos a key feature was that I tended towards the same posture and manner of expression even decades apart. So too does Janis Joplin, the mild-mannered one anyway. So here a face split is useful. This Janis Joplin to the right, in my opinion, did interviews and appearances where no performance was necessary, allowing the other one some peace and quiet.

That is precise alignment of features. It does not get better than that, except perhaps with my own face. And remember, Amy Goodman says the face on the left is hers. 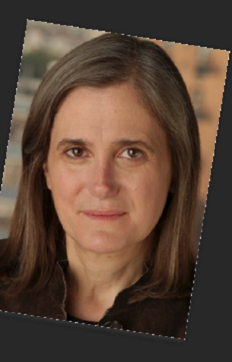 The eyes, nose, mouth and chin are in perfect alignment. But here is the problem – I would bet as you are reading this that you think I have made the case that Janis Joplin was twins. And I would bet that you are having problems with the Amy Goodman angle. I realize that finding differences in people said to be the same person is a much easier task than showing that two people are actually one. So I will let it rest. You either buy in or not. We all have separate sets of eyes.

But if Joplin is twins, what about Goodman? Shouldn’t there be two of them? Not necessarily. One could have retired, but of course Straight came through again. This one we can do with the naked eye. The photo on the left, said to be Amy Goodman, is the other twin, the one who performed on stage. Notice how even years later she still smiles a full smile, where the Amy Goodman above is reserved, almost always smiling with mouth closed. This Amy Goodman fills in occasionally, but is mostly absent. (We did facial comparison in the original post.)

Three final points to make here: First, the matter of talent. As I was working yesterday I had YouTube videos of Robin William running as background noise. Good lord was that man talented! It could be that he is of the peerage, and that eased his way to fame, but even so, the man could bring down a house with his standup and then turn around and creep us out with his acting ability, as in Insomnia. His death seemed fake, so maybe he is still with us and retired, but no one ever for a second thought his fame was accidental.

Not so with Janis Joplin, in my never-humble opinion. I never cared for her manic onstage energy, never thought she had much of a voice. Her “talent” was mostly power of suggestion, as when “Rolling Stone ranked Joplin number 46 on its 2004 list of the 100 Greatest Artists of All Time[11] and number 28 on its 2008 list of 100 Greatest Singers of All Time.” That’s a quote form Wikipedia, along with a spook marker footnote. But, really? One of the greatest singers of all time? OK. I am not the best judge in these matters, but I suspect that her early and fake death had to do not only with a cleaning out of all of that fake talent in Laurel Canyon, but also with difficulty in sustaining the illusion of real talent.

Secondly is the matter of her death from heroin at age 27. She was widely publicized as being a drug and alcohol abuser. It is my opinion that this is deliberate advance staging, so that when her death was indeed faked, people sat back and thought “Yeah. Saw that coming.” Janis Joplin was not a drug or alcohol abuser, as I see it. But she played one in public.

Finally, this photograph of the Joplin Family: 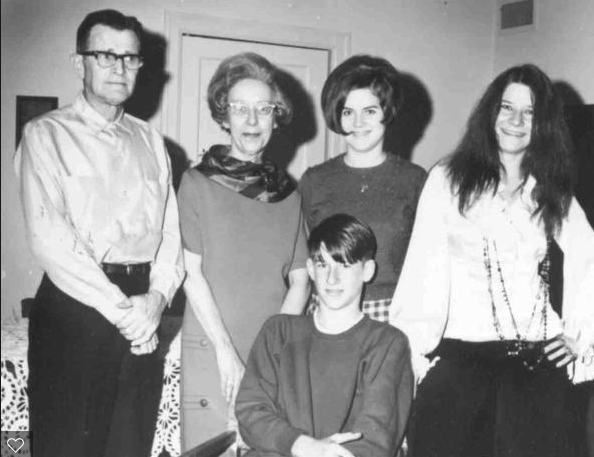 That is the performing twin, and not the laid back one. I trust my readers enough that no explanation is needed here.

This has been fun! Embarrassed as I was last night, I have enjoyed reconstructing the matter of Janis Joplin faking “her” death and re-emerging as Amy Goodman.