One of the most iconic, to the present day, participant in the Nazionism Plot was of course the fashion designer for the Nazi uniforms, Hugo Boss.

Born in Metzingen, close to Stuttgart, back then a town of about 5000 people, but already a center of the textile industry. Those of us who have read Miles Mathis’ articles know how wealthy jews dominated that industry for long. And Hugo Boss, not included in his overview of jewish Nazis, was no exception. I looked into Boss just a few weeks before MM released his jewish Nazi paper, now a bit more on him.

First, Wikipedia, that has an amazingly short article for someone this influential in today’s “fashion” industry:

Boss joined the Nazi Party in 1931, two years before Adolf Hitler came to power. By the third quarter of 1932, the all-black SS uniform (to replace the SA brown shirts) was designed by SS-Oberführer Prof. Karl Diebitsch and Walter Heck (graphic designer), who had no affiliation with the company. The Hugo Boss company produced these black uniforms along with the brown SA shirts and the black-and-brown uniforms of the Hitler Youth.

In both the mainstream and the con-trolled “Dolfy hero” story presented to us, it would make sense for “Aryan” Germans to pick the most “Aryan” of people to design their uniforms. After all, that was the message so carefully crafted by Jewseph Goebbels, an excellent student of Eddy Bernays.

But of course, as happens all the time in this Nazionism plot, they selected a jewish designer to fabricate the uniforms for their “antisemitic army”. Hmm… 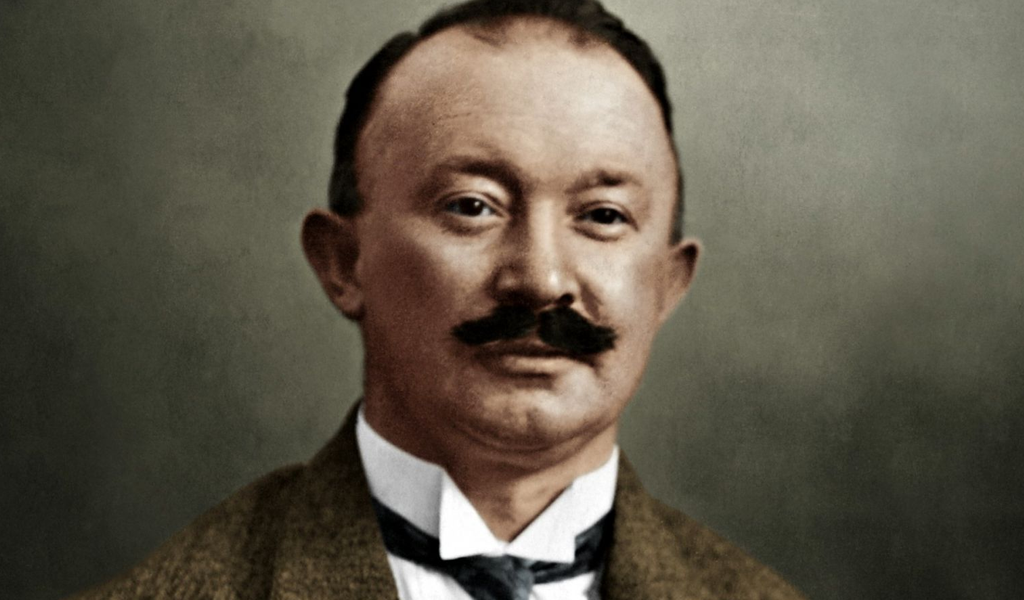 Honestly, he doesn’t look German at all, more like mixed-race Chinese…

Hugo was the son of Heinrich Boss (no genealogical information, but see below) and Luise Münzenmayer. Münzenmayer/maier/meyer is a jewish surname, see these examples:

German and Jewish (Ashkenazic): from Middle High German Walhe, Walch ‘foreigner from a Romance country’, hence a nickname for someone from Italy or France, etc. This surname is also established in Sweden. North German: from the personal name Wole, a short form of Wol(d)er (see Wahler). Norwegian: habitational name from any of several farmsteads named Val, from Old Norse vaðill ‘ford’, ‘shallows’.

Special recognition was given to “Unsung Heroes” of JFS including […] and past and present front office staff; Doris Munzenmaier…

Voices of the Holocaust( Book )

What about his father, Heinrich Boss?

Not to be found, even Hugo doesn’t appear in Geni, which is strange for such a famous man, but another Heinrich Boss (who might be a cousin of Hugo, contemporaneous with him) does:

But this is all conjecture, we are not responsible for our ancestors and coming from a jewish family in and by itself is of course irrelevant. True. But let’s look at Hugo’s choice for his wife, from the German wiki, equally short article:

In Switzerland, there is a politician of the Zionist Geert Wilders type, Oskar Freysinger:

Freysinger was questioned about this he denied that he was the “source of the remarks” and said that he was in fact an ardent supporter of Israel. Indeed, he has in the past expressed his support for Israel in much the same way Geert Wilders does,

“Our party has always defended Israel because we know that if Israel disappears, we would lose our front-line of defense. . . . As long as the Muslims are focused on Israel, our struggle will not be difficult. But the minute Israel goes, they will come after the West.”

What about the past? Readers interested in the subject of jewish power across the world know there have been early and ongoing efforts in the rich markets of China (silk, opium, spices, etc.). Especially Shanghai, the biggest port in the world, was a hotspot for jewish merchants:

While a Jewish community has existed in Shanghai since the late 19th century, the first large wave of immigrants came in the 1920s and 30s, as thousands of Russian Jews fled the Bolshevik Revolution for the more business-friendly foreign concessions in Shanghai. A decade later, the mainly Russian and Sephardic Jewish community was supplemented by tens of thousands of Ashkenazi Jews from Europe, who fled during the early stages of Nazi rule in Germany.

And onwards, via the Shanghai Ghetto:

Many in the Polish-Lithuanian Jewish community were saved by Chiune Sugihara, the Japanese consul in Kaunas, Lithuania. They managed to flee across the vast territory of Russia by train to Vladivostok and then by boat to Kobe in Japan. The refugees in number of 2,185 arrived in Japan from August 1940 to June 1941. Tadeusz Romer, the Polish ambassador in Tokyo, had managed to get transit visas in Japan, asylum visas to Canada, Australia, New Zealand, Burma, immigration certificates to Palestine, and immigrant visas to the United States and some Latin American countries. Finally, Tadeusz Romer arrived in Shanghaion November 1, 1941, to continue the action for Jewish refugees. Among those saved in the Shanghai Ghetto were leaders and students of Mir yeshiva, the only yeshiva in occupied Europe to survive the Holocaust.

Similarly, thousands of Austrian Jews were saved by the Chinese consul-general in Vienna Ho Feng Shan, who issued visas during 1938-1940 against the orders of his superior the Chinese ambassador in Berlin, Chen Jie.

Visitors, including Hillary Clinton, Madeline Albright, Gerhard Shröder [sic] and all Israeli leaders, are shown a video inside the offices of what was once the headquarters of the Zionist Youth League.

What has this to do with Hugo and his wife?

With a picture linked at the US H Memorial Museum.

Surely we would expect, in the mainstream view of “the Good Allies” versus “the Bad Nazis” that the one who supplied the uniforms for the Nazis would be punished for it, right? Well, as we will see further down the road with so many of the Nazi big shots, Hugo Boss didn’t have to fear, he was “denazified”, wiki:

After World War II, the Denazification process saw Boss initially labeled as an “activist, supporter and beneficiary” of National Socialism, which resulted in a heavy fine, also stripping him of his voting rights and of his capacity to run a business. However, this initial ruling was appealed, and Boss was re-labeled as a “follower”, a category with a less severe punishment.

Namely; none. Only that his son-in-law was denied ownership of the company. 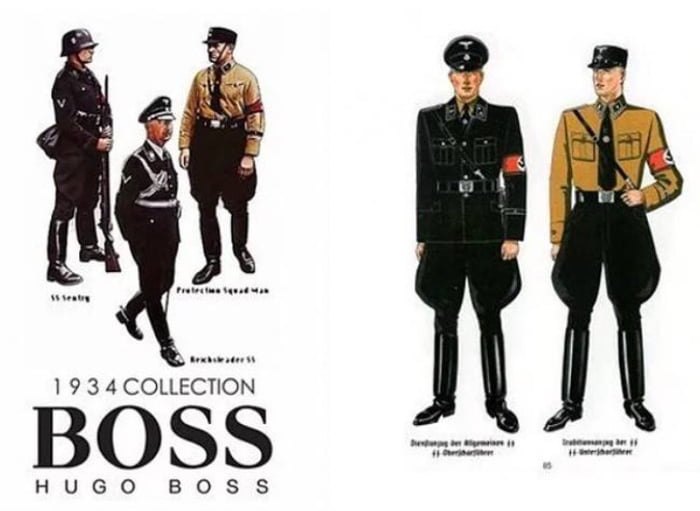