In the above video, Dr. Sam Bailey does a marvelous job of laying out the details of PCR testing. She doesn’t say as much, but I will – that PCR is the beating heart of this hoax. Below are some screen grabs for the video in case you’ve no time or desire to sit through a 17-minute presentation. But otherwise, watch it. Your time will be well spent, and you’ll understand at last, if you haven’t before, that we live in an era of junk science and quackery. We need to get away from debating the merits of testing, virus isolation, the science behind masking – just walk away from all of that and focus on criminality. The people behind this hoax are not misguided, they are criminals, and belong in jail. 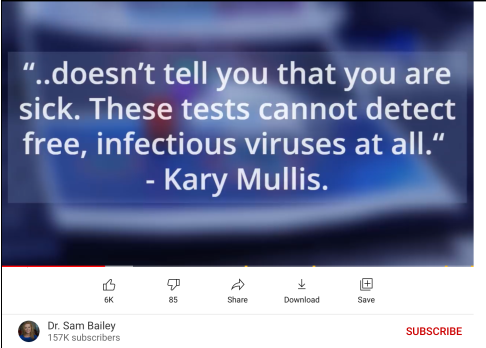 This might still be the case – the first criminal misuse of PCR testing was during the AIDS hoax, most likely the prototype for the current scamdemic. But imagine that you test positive for HIV (never proven to cause any disease, much less AIDS, a “harmless passenger virus” according to virologist Dr. Peter Duesberg). Information comes at a premium in medicine, and truth is a rarity. Doctors mostly deal in lies and misinformation, and are the last to know. They are brainwashed. I will explain this statement at the end of this piece.*

Testing positive for HIV was a death sentence. A person getting that diagnosis is half dead already, depressed, perhaps suicidal, and headed for monstrous invasion of the body by foreign agents that will eventually kill him. That is criminal, people should be sitting in jail cells, but are not – their careers go on unimpeded. And the cruelest part of this medical treatment is that the person who will die from doctors is most likely perfectly healthy.

AIDS was the forerunner of the current hoax, but keep in mind, with AIDS we were dealing with murder. With “Covid-19” we are, for the most part, dealing with quarantine, or imprisonment without due process, for two weeks. That too is criminal, but less serous than the dispatch and disposal of people who were merely “HIV positive.” (It is true that older people who are hospitalized with symptoms that may be claimed to be the result of “testing positive” are intubated, put on respirators, placed in a coma and administered foul and harmful antiviral drugs. This too is murder. The process takes perhaps two weeks.

*I was in my late teens, and know exactly where I was standing in our small cracker box house – in the kitchen by the refrigerator. My brother, a newly ordained Catholic priest, was talking proudly of a Catholic program known as “SEARCH Retreat.” They would (maybe still do) take young kids of high school age and a little older and put them in a building and isolate them over a weekend. They would keep them awake the entire time. My brother said that in this sleep-deprived state, they would believe anything they were told. He seemed to think this was OK.

He was young. I don’t think (but don’t know) that he actively participated in SEARCH programs in his time after that, as maybe he got wise that this is child abuse. He was a wise man. I do know that priests were always on call at Searches to hear confessions. Also, I know there is a similar program for adult Catholics, though I do not recall its name. It is ongoing indoctrination.

I mention that because of something else I have learned over time – the education of doctors. They are bombarded with things to memorize, and are usually sleep-deprived while in school, often relying on uppers and other drugs to get through studies and tests. Once in internship, it is the same thing … long shifts with little or no rest. Their medical licenses are the product of years of sleep deprivation and indoctrination.

I mentioned early on in this piece that most doctors (and physician assistants) are brainwashed. This is how they do it – sleep deprivation. It has to be deliberate, just as Catholics and their SEARCH helpers know that without proper rest we are susceptible to manipulation and indoctrination. Doctors come out of med school knowing only about bugs and drugs and slice and dice. They know nothing of nutrition or natural healing or the true nature of germs and disease. They are a danger and a menace to society in anything save treatment of injury. This is why iatrogenic death is at least the third highest cause of mortality in our country, possibly first. Dr. Andrew Kaufman has said that 60% of what he learned in medical training was useless memorization. He was one of the bright ones who deprogrammed himself.

True education should be a process of inquiry, teachers and professors offering guidance, but allowing students freedom to roam and explore, and even make mistakes. Instead, we are taught to believe, and not to think. I was brought up Catholic, I went through a SEARCH weekend. I and another kid had the giggles the entire time, but they had me good, these Catholics. It took 20 years to break free.

I am a lucky man, a happy man, for having broken free. I wish that for everyone.