You’d never guess I was once a CPA, as my storage system is chaos. But then, maybe I just wasn’t a very good CPA. I have a stack of papers on the bottom shelf of my bookcase, crawling with 3M flags, and in no order. I come across something and think “Hmm, I want to hang on to that,” and then forget about it. Yesterday I was asked for information on Covid, and before deciding not to provide anything to someone who can look and discover for his or herself, I went through the stack. In so doing I came across a list of 57 points of information concerning poliomyelitis. In looking for this list on the Internet, I found that it was compiled by Forest Maready, and that it does not exist in the form I have it, but rather now exists as 36 points, the last 21 absent, on a Twitter feed. I have tried but cannot find a way to move the last 21 points from paper to screen in readable form. Maybe it does not matter.

Maready is a prolific author, his first and maybe most important book called The Moth in the Iron Lung. That title will be self-explanatory when I am done, and perhaps even obvious to many readers. But first, I want to present a graph: 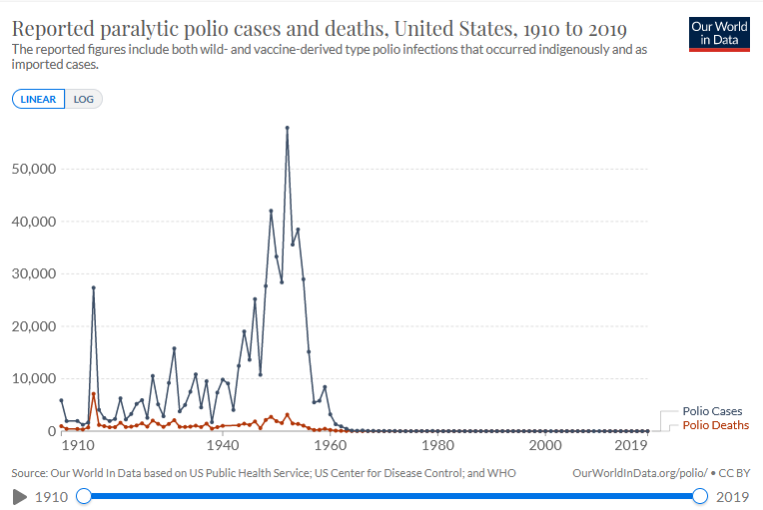 One of the great myths that vaxxers love to spread is that their poisons caused the decline, even disappearance of certain diseases. This is true of none of them, and especially not in the case of poliomyelitis. Note how by the time of introduction of the Salk vaccine in 1955, polio was already in deep retreat.

Maready, however, is a believer in viruses, so his presentation becomes confusing to me, as he claims that the disease was caused by lead arsenate, introduced in 1892 to combat an infestation of crops by the gypsy moth. Later, he says, DDT became the cause, and later still, various viruses, even bacteria. The confusion eases somewhat in that he claims that the lead arsenate and DDT get in the lower intestines, and then make their way to lower spine, where viruses and bacteria take over. Maybe so for bacteria. If done by a virus, it has never been documented – only speculated.

I am going to go through some of his points that I obtained by unknown means sometime in the past. Right now I want to highlight some of his most important information.

The first account of a disease like polio appeared in 1789, a disease that for long after would be attributed to teething in infants and “foul bowels.” (2) It reappeared at various intervals in subsequent years, but was never more than spotty and sporadic (3,4,5). “Polio” means gray, and “myelitis” is inflammation of the spinal cord. A poliomyelitis is an inflammation at the base of the spinal cord, which exhibits visually in the form of gray lesions (6).

The first epidemics of poliomyelitis occurred (not) coincidentally with the wide use of lead arsenate in the northeastern United States (15). The disease affected mostly children, but also affected horses, dogs, chickens and pigs. This was unheard of (16). Part of the problem in diagnosis and treatment, and later vaccination for poliomyelitis was Koch’s Postulates [later expanded in number by Rivers], research guidelines for bacterial disease that falsely asserted that every disease, from measles to mumps to strep throat to polio had one, and only one cause. Researchers wrongly began looking for the one and only cause of polio (21).

A “virus” said to cause poliomyelitis was discovered in 1908 by means of injection of disease tissue into the brains of two monkeys. Here’s researcher Jim West on the subject, cited in the book The Contagion Myth, by Dr. Tom Cowan and Sally Fallon Morell:

“West notes that in 1908-1909, German researchers Landsteiner and Popper in Germany claim to have isolated poliovirus and used it to cause polio in monkeys. Their method was to inject the pulverized purée of diseased brain tissue into brains of 2 monkeys. One monkey died, the other was sickened. Headlines trumpeted this “proof” of polio virus causation. “The weakness of this method is obvious to everyone except certain viro-pathologists,” said West. Never has “polio contagion” passed muster with Rivers’ postulates.” (Page 38)

In fact, I can imagine many horrible outcomes by infecting any brain with diseased tissue. Pity the poor monkeys, but to this day polio is said to be caused by one thing, and one thing only, a virus. And, further, it is claimed that polio has mostly been defeated by one thing only, the vaccine. Others claim that improvements in diets and sanitary conditions caused a decline in many diseases, which seems to fit the evidence. All diseases have declined in line with the advance of sewers and clean water supplies. But for polio, something more than that is at work. (28) Here is West again, from the same source:

[Investigator Jim] West says: “a clear, direct, one-to-one relationship between pesticides and polio over a period of 30 years, with pesticides preceding polio incidents in the context of the [central nervous system]-related physiology… Leaves little room for complicated virus arguments, even as a co-factor, unless there exists a rigorous proof for virus causation. Polio shows no movement independent from pesticide movement, as one would expect if it were caused by a virus. Both the medical and popular imaginations are haunted by the image of a virus that invades (or infects) and begins replicating to the point of producing disease. In the laboratory however polio virus does not easily behave in such a predatory manner. Laboratory attempts to demonstrate causation are performed under conditions which are extremely artificial and aberrant.”

So what is the means by which grey lesions appear at the base of the spines of people, mostly children? I’ll quote Maready directly:

31. I believe ingested pesticides, known to cause cellular membrane dysfunction, created a path directly from the intestines to the bottom of the spinal cord, located directly behind, for the viruses and bacteria to take hold.  (Emphasis added.)

35. As you grow, the spinal cord does not grow as much as the vertebrae and in adults, the bottom of the spinal cord ends up being much higher in relation to the intestines …

In other words, poliomyelitis, caused by pesticides but blamed on viruses, will affect children far more than adults. Poliomyelitis has declined and virtually disappeared in many countries along with the use of these dangerous pesticides. It has also been renamed, as will be discussed below. 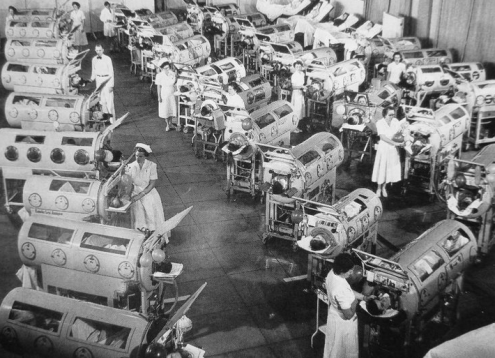 53. One more thing, the iron lung picture [above] is what everyone thinks of when they think of polio. This was a publicity stunt arranged for Life Magazine. Most of these iron lungs  were brand new and were headed around the country to other hospitals.  54. It was taken in the auditorium of Ranchos Los Amigos Hospital in Los Angeles, which had been emptied of its rows of seating to make this picture. It was designed to show worried parents that the U.S. was ready for battle. 55. Although the hospital had the largest polio ward in the country, at its peak it would have never had this many iron lungs in operations. Most hospitals in big cities had a couple of iron lungs. 56. There were around 1,100 in the whole country at their peak.

Maready has done an important service is organizing the information around the polio outbreak that started in the late 1890s and ended in late 1950s, coinciding with the advance and decline of lead arsenate and DDT. But it is nice to be basically free of this scourge, right? Again, I cite Cowen and Morell:

As for polio, even with worldwide vaccination programs, polio has not gone away, either in the United States or in Third World countries. Today in the United States, it has received a new name – acute flaccid paralysis (AFP), displaying symptoms identical to polio – with over 200 cases recorded in 2018. Many parents have observed that the condition appears after a vaccination. CDC’s pathetic advice: “to prevent infections in general, persons should stay home if they are ill, wash their hands often with soap and water, avoid close contact (such as touching and shaking hands) with those who are ill, and clean and disinfect frequently touched surfaces. …

Indian researchers described this strong correlation in the 2018 publication in the International Journal of Environmental Research and Public Health and calculated that, countrywide from 2000 to 2017, there were “an additional 491,000 paralyzed children” in excess of “the expected numbers.” Dr. Suzanne Humphries suggests – far from credit for eliminating childhood paralysis owing to vaccination campaigns – “there is strong evidence pointing to the likelihood that experimental polio vaccination is related to the sharp rise in AFP. (Page 39)

It appears to me that polio never went away, and might indeed be festering in places where use of DDT is still prevalent. We should think about that as we wash our hands with the soap of viruses. A rose by any other name …