Stephers puts so much effort into per posts, giving them a long-lasting quality. They are still drawing comments months after posting. When she called her most recent “Part 10 of 10” I was somewhat concerned that she would not be writing anymore. However, she says that she is not done, just done with that particular series. She has much to offer, and will continue to write. For that I am thankful.

My interface with Jennifer Grosz

I had an exchange with Jennifer Grosz, General Counsel for an outfit called Covid Check Colorado that went like this (this outfit oversees all PCR testing in the state, as I gather):

My doctor is requiring that I undergo a PCR test later this month in advance of minor surgery. I have reluctantly agreed to do so.

My question for you is this: How many amplification cycles will the laboratory that does the test use? This information should be disclosed to all who take the test so that we are fully informed of the reliability of the results. According to a study published in Oxford Academic (Rita Jaafar et al), the results of PCR testing degrade with increased amplification cycles.

You will note that at 25 cycles the results are judged by the study to be 70% reliable, at 30 cycles only 20% reliable, and at 35 cycles <3% reliable. Anthony Fauci has stated that cycles over 35 produce unreliable results, but he is misdirecting – as in saying that he is implying that cycles less than 35 are reliable. That is not the case.  He is a clever liar.

Dr. Kary Mullis, inventor of the PCR process, said two things of importance prior to his untimely death, one that PCR should not be used to diagnose disease. It is a “qualitative” test, and finding one virus (or in this case a smalls strand of the alleged genome of an alleged virus) tells us nothing. With viral infection, if such a thing exists, it is viral load that matters. So for instance, if we all tested for presence of the streptococcus bacteria, most of us would have it in us, dormant, but might test positive. That means nothing, as just having a few germs in us (we actually have billions) does not mean we are diseased. Far from it,

Mullis also said that use of PCR for its intended scientific purpose, comparison of strands of DNA, should not employ more than 25 amplification cycles. I am told that WHO and CDC recommend 40 cycles, meaning that all of the positive “cases” of the last 18 months are false positives, that is, test results are useless.

I hope I merely test negative and never again have to undergo a PCR test, but if I test positive and you try to quarantine me, I intend to seek a writ of habeas corpus. For that reason, I suggest you disclose to me the amplification cycles that will be used in my forthcoming test.

I  didn’t really expect anything from them, as the people running the tests are as clueless as anyone walking down the street. I did, however, receive the following:

I am confirming receipt of your email. CCC has no involvement with any quarantine requirements as it is not a governmental agency.

Please let me know if you have any further questions.

She knows damned well that I am trapped, and have no “elsewhere” to go to get tested.

As it is, however, I happen to speak fluent gibberish. “Modalities” being in agreement with one another means nothing. (“Modality: A particular mode in which something is expressed.”) I read once that the writers for the old Star Trek series would write out scripts with dialogues and characters and settings, but when it came time to describe how the Enterprise and all its amazing machines actually worked, they would leave a blank space as follows:

Other writers would then come along and oblige. I am sure that my question, which is likely beyond the abilities of anyone at CCC to understand or answer, was booted up a pay grade or two above Ms. Grosz, someone who wrote the technobabble for her to use in her answer to me.

However, and this is important, she did answer my question: Each lab’s amplification cycles exceed forty, therefore the tests (which are searching for a virus that does not exist anyway) are meaningless. Put that modality in your pipe and smoke it. Forty amp cycles might, however, be high enough to trap me, in fact, to trap enough people that they can claim that the virus is “spreading.” In seeking a writ of habeas corpus I now have her admission in addition to the Fauci statement and the Jaafar paper and the Mullis statement. Of course, I would also need a judge possessed of moral courage. Good luck, eh?

This may be the most unimportant piece of blog writing I have ever done. Larry the Cable Guy (Daniel Lawrence Whitney) is not the redneck he  pretends to be on stage. I happen to think he is very funny, and enjoy his act. (He calls sitting on a toilet the “fecal position”.) I watched part of his act a while back, and I slowly got the impression that not only is he more cultured than he pretends, but that he is also wearing a fat suit while performing. I would not say he is skinny by any means, but rather just normal middle aged plump.

I do not care, by the way. It is just show business. Being fat is a way to speak to his audience, saying “I’m just like you.”

I watched a movie last week called Cry Macho, starring Clint Eastwood. Let me say at the outset that I am in no way critical of Eastwood or his talents, and certainly not his age, currently 92 years. In fact, while I started out a little cynical that a 92 year old man could pull off a leading man role, as the movie went along, he grew on me. It is not an “important” movie in any sense, just kind of a road picture with him and a young boy and his rooster, whose name is Macho. The only thing that broke my WSOD (willing suspension of disbelief) was a scene in which Eastwood was breaking a bucking horse, which obviously would be impossible at his age. There was also some hinting at a romantic relationship with a middle-aged woman, but Eastwood had the good sense to keep that in the “just friendly” mode.

Here’s something I suspect about Mr. Eastwood, Queen Elizabeth (now 95) and David Rockefeller, who lived to be 101: They obviously have the best health care available, and access to good and nutritious food, and live cleanly. But I think there is more to it. I think they also go their whole lives without vaccinations, medicine for hypertension, diuretics, meds for high cholesterol, or anything for diabetes or arthritis, and on and on.  Because these are members of our aristocracy, they are exempt from Big Pharma and all of its poisons. (We can be damned sure they’ve not taken the Covid jab.) That allows them better longevity than ordinary people.

I wish for Eastwood many more happy years, and have generally enjoyed his movies. His high point was, in my opinion, 1992’s Unforgiven, which won Best Picture that year in kind of a hands down fashion. Nothing else could touch it. I was going to mention what I though to be his worst, but we all have opinions, and I am not writing to criticize a long life of movie making for a mistake or two.

We all know about the “conspiracy theory” meme, and how it is used by people of lesser intelligence to avoid thinking about things. (It is a thought-stopper.) I’ve been watching the Batman series of movies (1989 forward) and in the past have enjoyed Superman movies. One of the essential features of those movies is that people cannot recognize the lower half of Bruce Wayne’s face when he wears a Batman mask. Superman cannot be recognized to be Clark Kent, I gather, because of some mysterious magical quality of his horn-rimmed glasses.

Here’s a comment I grabbed from Reptile Dysfunction from an anonymous person:

The idea that it is wrong or crazy to be suspicious of powerful people and their means and motives and ability to network is a protection for them. It allows them freedom to pursue their nefarious ends without interference, as people automatically thought-block themselves when even just a little suspicious. That’s why I thought of ordinary citizens of Gotham or Metropolis cannot see through simple disguises like masks and glasses. It’s a little more than just stupid. They’re afraid of being accused of being conspiracy theorists.

Even Montana politicians are juiced!

Montana is breaking ground, passing a law that prohibits vaccination as a condition of private employment. I wondered, as it is such a small state, how it would be undone. Today I found it. I will link you here to a Billings Gazette article wherein a lawsuit has been instituted to overturn the law. The judiciary offers us no protection, so I assume the lawsuit will succeed. The Billings Gazette article might be firewalled, as  that outfit does not allow much in the way of traffic by outsiders. They will also popup you like crazy. I don’t know how they say afloat. It is not by reporting news.

But hold it a minute! The governor of Montana is Greg Gianforte, who like John Magufuli, the former president of Tanzania who ridiculed PCR testing and then went off and died. He tossed us a lifeline and then let us down, his death most likely faked, or perhaps murder. Who, I asked, is Greg Gianforte? Here’s my answer from Geni.com:

You can follow this line back a few years, maybe to 1937 on his Dad’s side, but those “privates” suggest secrecy. His mother is a Douglass, and for some reason, that double “ss” at the end (maybe too much Mathis) suggests a powerful connection. My memory is not great on this, so I ask anyone with genealogy chops to look over this family. I do not like genealogy. 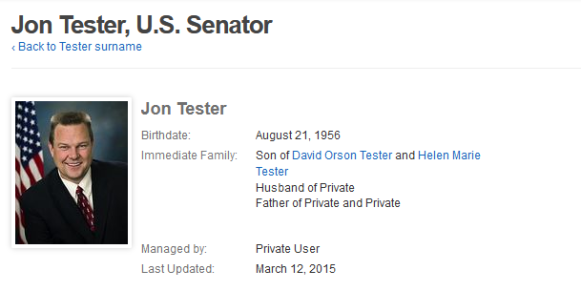 The photo of Tester, by the way, as I see it, was taken maybe 300 pounds ago. The man is beef on the hoof. But what I found out is that Tester is a large landholder in Montana, landed gentry as we say, and that his father goes all the way back to merry old England, and that his mother is a Pearson. I ain’t no Mathis here, but right away I think Drew Pearson, Lester Pearson, and stolen elections and a gigantic fake Jon Tester image, a man I despise, a blimp in the Macy’s Thanksgiving Day parade.  I assume him to be juiced, and, of course, no friend of ours.

I assume the same of Gianforte, posing as an opponent of Covid fascism, and, as we speak, getting ready to cut the rope and let us fall. So I looked into his Lieutenant Governor, in case he fakes his death. What I got was zip – nothing on Kristen Juras. But her brother is Wylie Gustafson, a country musician who has toured nationally, and who is a fifth generation Montanan, and who, unlike his sister, has parents … well, at least a Dad, “Rib” Gustafson, a large animal veterinarian. Geni and Ancestery list no parents for Kristen Juras, and Wylie has no mother. That could, of course, just be sloppiness. I do wonder, however, how Wylie is known to be “fifth generation” Montanan when they don’t list ancestors beyond his father. (Did I mention that I do not like genealogy?)

As things go, they love to give us false hope. Gianforte is not our friend, and while he may not fake his death, he will not, for real, fight evil. For that, we need the Batman.