One trend I’ve been noticing with many of the twins, particularly the most famous ones, is that there always seems to be some sort of mention of twins, usually in a tongue-in-cheek manner.

Mark already noted the “photoshopped” images of the Drake and Rihanna twins, then there is Justin Timberlake’s “secret half brother” and the Jennifer Lawrence twin sister sketch.

So it’s not a surprise that there are similar stores regarding Hollywood party girl/hot mess Lindsay Lohan seeing that when she was a child she starred in the remake of The Parent Trap. 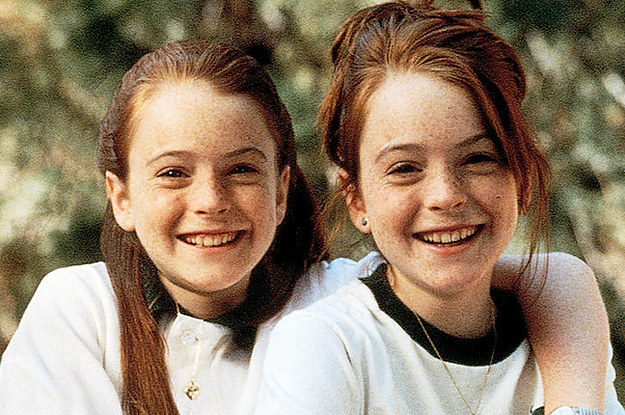 Now according to the mainstream news, those are not two people. No, no, it’s Lindsay Lohan playing two different characters with the help of “CGI Magic”. Watching that movie, I must say that that is some excellent CGI Magic. In fact, Hollywood seems to just LOVE twin movies where the main character supposedly plays two different characters. I mean just look at this:

I propose that there is a high probability that all of the above actors are actually identical twins. Why else would this sort of plot be popular? The Parent Trap was cute, but who saw Sudden Impact and thought it was great?

But I am not the first one to propose this regarding Lindsay Lohan, not at all. The conspiracy goes that Lindsay Lohan had an identical sister that appeared in The Parent Trap who eventually died. This is a common disinfo trope in conspiracy circles. Twins are never mentioned, only clones and only to say a celebrity died, went into hiding, or was “replaced”. It is never brought up that two twins may be playing the same character simultaneously.

To cover this up, we have this article from 2015 appear in Seventeen magazine:

Very clever. They swap out the head of one of the Lohan twins and add this Erin Mackey instead who clearly looks different although somewhat similar enough to pass as a body double. Notice in the 2nd image how Mackey is pasted way back into the background. The right side of her face is far too dark compared to Lohan and the actors who played her parents.

But is Lohan actually twins?

What I did was take the two Lohans from the Parent Trap photo above and aligned them side by side. Since they were from the same photo, I did not resize either twin. Here is the result. If the “CGI Magic” was simply duplicating her in the same shot, we shouldn’t see any differences in facial alignment.

You can see the difference in the alignment, and even in the photo from earlier. One twin has a round face, and one has a clearly longer face. I will show you that this stayed consistent as they aged. I give Mark credit for doing the work of identifying each twin.

Here is Twin #1 with the round face. In my opinion, she is the more attractive of the two.

And here is Twin #2, with the longer face who does a better job of playing the drug addict/court room/washed up child star.

So there you have it. As always, Intelligence gives clues and is always rubbing it in your face. The arrogance is extraordinary, but not quite as extraordinary as the gullibility of the public.

6 thoughts on “The Curious Case of Lindsay Lohan”