“Annie, we are told, helped identify the body. She told investigators that John had lost two toes in a lawn mowing accident as a youth. If perhaps the leg that survived the crash were his right leg, and if the foot were still intact, well, that might just help identify the body. And it did! The Coroner later reported “…healed partial amputations of the right first and second toes” on the right foot. Annie’s song was the right tune, it appears.”

The above words are from my post, John Denver’s death: Another Hoax. Just recently I have received comments, here and here, that address the matter of the missing toes. Keep in mind that throughout his life, there was never any mention of his missing digits. The matter only came to life when he died.

I haven’t addressed the Denver matter much over the years other than to answer various commenters. But I think it odd that this little blog can draw people from anywhere out of the shadows, people who knew him personally, people who know about things like missing toes. I also think it odd that the piece, 7,500 words, along with very good and numerous comments, filled with evidence, draws only interest in those toes. Nonetheless, I decided to have a look. There is a photo of JD, supposedly taken in April of 1997, six months before his death, and he is indeed sporting those missing toes. There is one and only one photo in existence that shows this. 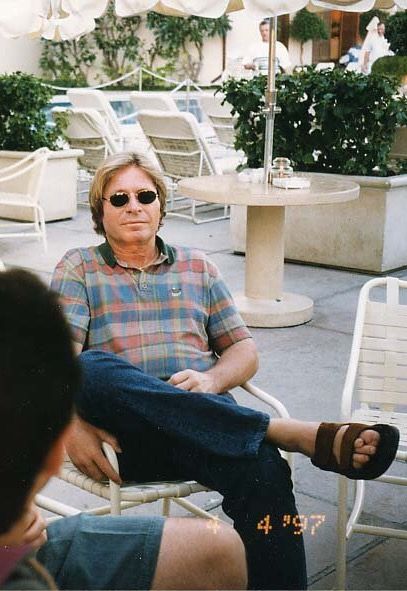 I’ve spent quite a bit of time with this photo, and I think it to be very good work, some very good Photoshopping. Just looking at the surface features, as follows, see if you agree with me on the inconsistencies.

I did some more work on this, using Photoshop to highlight certain aspects. Let me know what I am missing, as this stuff is not my regular occupation. 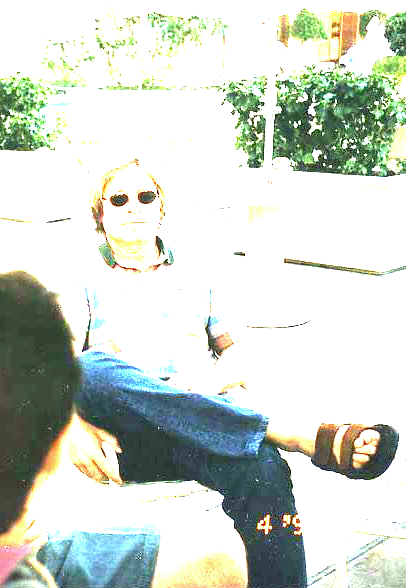 Here I have amplified the exposure. The pants stand out, as does the neck. The lower hand, his right, stands out even as the left is contrasted out. The lines are hinky on the lower leg again. I’m not sure what this tells me, however, as I am just monkeying around. I am not a photo analysis expert. 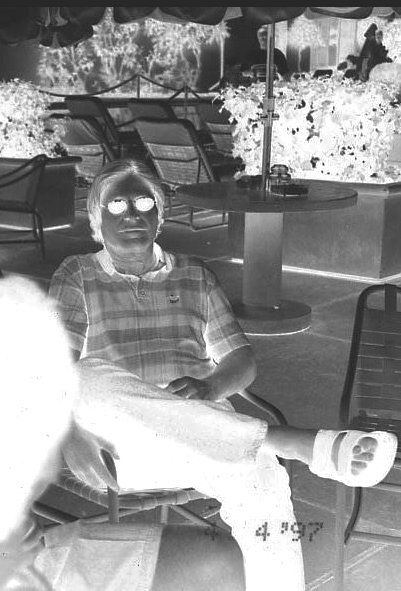 Here I have inverted the contrast. It’s pretty much the same as above, with the extremely dark parts showing up as bright white. It is the bottom of the upper leg and the whole of the bottom leg that stand out, as in the original photo, looking unnatural in intensity here, and very dark in the original. As above, I am just monkeying around.

For this, I went to a website called Forensically, and used a tool called Luminance Gradient. Here is what the website says about that tool:

The luminance gradient tool analyses the changes in brightness along the x and y axis of the image. It’s obvious use is to look at how different parts of the image are illuminated in order to find anomalies. Parts of the image which are at a similar angle (to the light source) and under similar illumination should have a similar color; Another use is to check edges. Similar edges should have similar gradients. If the gradients at one edge are significantly sharper than the rest it’s a sign that the image could have been copy pasted. It does also reveal noise and compression artifacts quite well.

As I read that, Denver’s head and chin, the back of the head of the interloper in the foreground, and the upper leg and ankle are significantly sharper than the rest of the photo. Is that sign of alteration? I am not sure enough to say yes, as I have never had much luck with Forensically.

What does it all mean? Here’s the original photo:

I see several photos blended. Denver’s head has been pasted on another body, leaving a neck looking like that of an old man. The shirt, left arm and upper leg belong to a man who unfortunately lost a couple of toes. This guy and the man in blue shorts seem to belong. For reasons unknown, the lower leg has been shaded, possibly inserted along with the oversized hand from yet someone else, the edges altered to make the look consistent with the upper leg. [Idle speculation: What if the man whose body is used here was perhaps an amputee, a war veteran, so that the lower pant leg had to be used to cover this up.] The head in the foreground was inserted to hide the monkey business with the right arm, concealing what would otherwise have exposed the whole photo as mishmash, an upper and lower arm that do not fit together.

My conclusion, fake fake fake. And how very convenient that this photo appears now, and not in 2016 when I wrote the original post. Someone got busy manufacturing evidence-after-the-fact, meaning my post actually got noticed somewhere. The two commenters who mentioned the toes were sent here, both on a mission. Neither are who they say they are. Perhaps both are the same person. They are spooks.

You know what I wonder after doing a post like this? I could be wrong about everything. I know this, and have to live with such insecurity.

The rest of this post is added just for shits and giggles:

This is a younger John Denver, for sure, but what stands out for me is the shoulders on this dude! I call this Mr. Big Jacket. This is just show business. They sexed him up. (Notice how his neck looks quite normal, no surgical scar.) Nonetheless, I went looking for a photo that had his real shoulders, and found this:

I thought I had him, bare shoulders exposed, and while not as big as in the one above, not at all unnatural. Then I looked a little closer and realized that the head is pasted on another body here. Is anything about this guy real?

Then I found this. Those appear to he his real shoulders, not at all like those of Mr. Big Jacket. Why is he posing shirtless? I don’t know, but it gives me a creepy feeling. I am done now.

Afterthought: Something that should have jumped out at me, but did not. In the Forensically Luminance Gradiant, JD’s ankle is entirely red, meaning the entire ankle is an insert. This is the nut of the matter … the foot with the distorted toes is inserted in the photo from some other photo. That’s why the ankle looks weird, almost feminine. It might be a woman’s ankle.